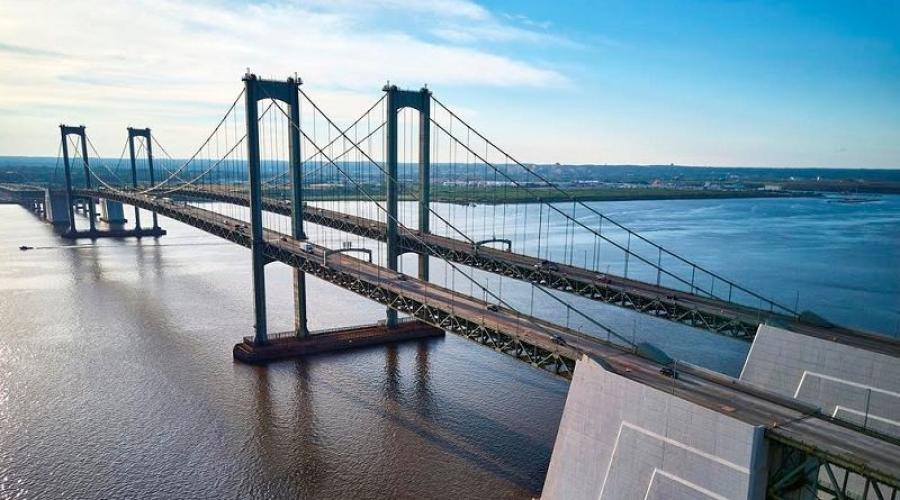 The Delaware River and Bay Authority (DRBA) announced Aug. 18 that an ultra high-performance concrete (UHPC) deck overlay pilot project will begin on the four-lane New Jersey-bound span of the Delaware Memorial Bridge in September. The duration of the overlay work is expected to last for five weeks following the Labor Day weekend.

With the combination of lower traffic volumes and favorable weather conditions, the period between Labor Day and Columbus Day was identified as the best time to complete this pilot project. In September, the Delaware Memorial Bridge also registers the fourth lowest traffic volumes in a calendar year, trailing January, February and March.

Two lanes will be closed to traffic throughout the overlay placement period – with an additional third lane shut down during the overnight hours. The Delaware Memorial Bridge is a twin suspension bridge that connects Wilmington, Del., with southern New Jersey. The north-south spans cross the Delaware River carrying a total of eight lanes of Interstate 295 and U.S. Route 40 traffic.

DRBA is a bi-state government agency that operates several bridges, ferry connections and aviation facilities in New Jersey and Delaware.

J.D. Eckman Inc., a bridge and road contracting firm in Atglen, Pa., is set to undertake the UHPC deck pilot project at a cost of $6.2 million.

"The bridge deck of the New Jersey-bound span is more than 50 years old and needs substantial repair and rehabilitation," said Chief Engineer David Hoppenjans, who noted that full deck replacement is a significantly more expensive alternative, takes longer to construct and is much more disruptive to traffic compared to a UHPC deck overlay.

"This dedicated, small scale pilot project will give the Authority direct day-to-day experience in the implementation of a UHPC overlay project offering critical experience specific to the Delaware Memorial Bridge."

The northbound structure has three types of bridge spans – girder, truss and suspension spans – and this deck overlay pilot program will address each structural span type. The project entails the removal of the old deck to a depth of 3.75 in., repair of the reinforcing mat, and installation of a replacement overlay with UHPC. A total of 500 ft., two lanes in width of the New Jersey-bound span, will be resurfaced using the concrete overlay. This work also requires hydro (high pressure water) demolition to expose the top reinforcing mat.

As noted in the findings of a recently completed bridge deck study, the northbound bridge deck is exhibiting accelerated deterioration and needs substantial repair. Significant research has identified partial depth reconstruction utilizing UHPC as potentially the most effective solution, pending the results of the pilot project.

The UHPC application has lower initial and life cycle costs, a shorter, more flexible construction schedule, and prevents salt intrusion when compared to a full deck replacement program. The final product will be stronger than the original deck, according to DRBA.

Another purpose of the UHPC pilot program is to develop firsthand experience related to the design, solicitation, and construction of this unique type of project.

The UHPC overlay pilot program also will provide insight into a number of Delaware Memorial Bridge-specific details, including the elimination of the centerline joint, the reaction of the existing concrete deck to hydro-demolition, the condition of the top reinforcing mat, actual replacement UHPC volume and how much full depth repair is required.

Hoppenjans added that the testing and analysis of the completed pilot program to assess the overlay performance will get under way in the spring of 2021. Dependent on a review of the results, the DRBA tentatively plans to initiate a full deck overlay program using UHPC on the New Jersey-bound span in three phases totaling nine months, although the exact timeframe for when that will commence has yet to be been determined.

The total cost of the full deck overlay project is anticipated to exceed $50 million.