The work is an independent state project from the Q-Bridge Corridor Improvement Program. 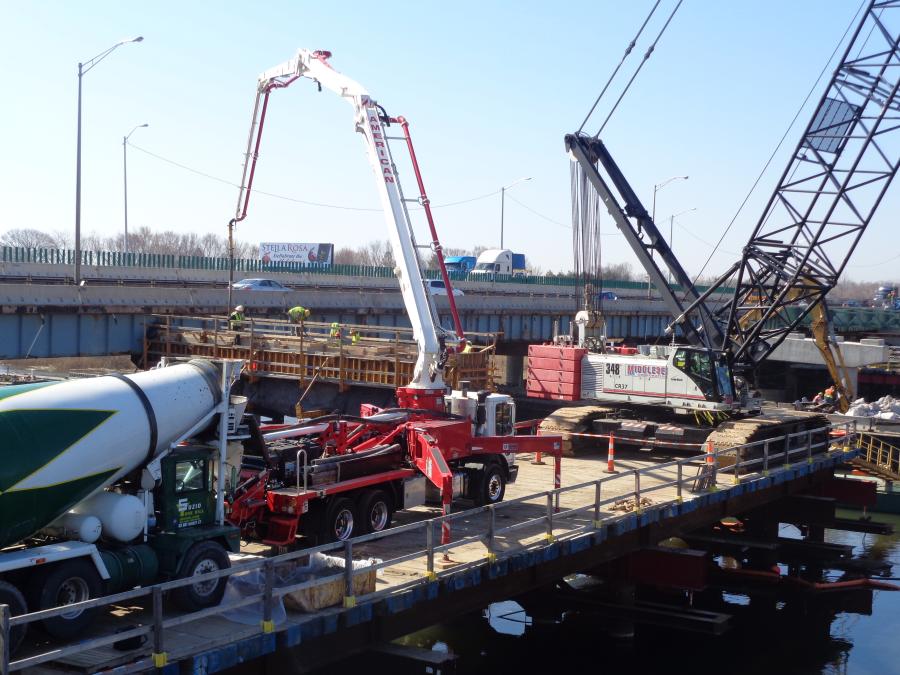 With the West River Bridge (built in 1958) nearing the end of its serviceable life, the Connecticut Department of Transportation (ConnDOT), agreed in 2012 to replace the 1,020 ft. (311 m)-long bridge linking New Haven and West Haven. The $135 million contract was awarded to Middlesex Corporation in November 2013.

The work is an independent state project from the Q-Bridge Corridor Improvement Program, and is being funded by the Federal Highway Administration and the state, with full federal oversight.

The project, which is scheduled to be complete in November 2018, will see the existing bridge replaced with a new, wider structure, extending to the south of its current location, as well as the Ella Grasso Boulevard Bridge over I-95. Additionally, Interchanges 44 and 45 along I-95 will be reconfigured. The existing loop ramps for the two interchanges are being eliminated, and combined into one diamond interchange, while maintaining the level of access currently provided to all areas.

Local roadwork includes the construction of a four-lane roadway section connecting Ella Grasso Boulevard to Kimberly Avenue, and providing access to West Haven from the new interchange. The new bridge and road system was designed by Parsons Brinkerhoff.

Prior to major construction, a temporary work trestle over water and wetlands was erected to provide access to construct the substructure/piers. The five new piers for the bridge rest on driven concrete piles where a concrete substructure rests on the pile groups and the structural steel superstructure is placed on the piers followed by a concrete deck and asphalt overlay. Some temporary roads also were built to accommodate traffic shifts, as well as drainage improvements.

“The West River Bridge is one of the longest and most heavily traveled bridges in the state,” said James Pelletier Jr. P.E., ConnDOT's supervising engineer, district 3A construction. “The project will widen the existing bridge from 92 feet wide to 136 feet wide while maintaining the existing six-lane highway and adding four full-width shoulders. The new bridge will allow for improved mobility and continue to benefit the region for years to come.

“Many of the local bridges were constructed in 1958 under the Federal Aid Act of 1956. The bridges were designed for a 50 year lifespan,” he added. “We're at 58 years now, so these structures have surpassed their design life and are now being replaced due to steel fatigue. Because this stretch of roadway created a bottleneck in the interstate corridor, construction of a new bridge met the warrants for improvements. The new bridge is a traditional steel plate girder design with a life span of 50 years. We're using high performance steel — 70 KSI steel, which allows for longer spans and fewer piers to complete the river crossing.”

The current bridge handles approximately 135,000 cars per-day. The new bridge will maintain the same capacity without the traffic tie-ups.

“This is not a capacity increase project as a design,” said Pelletier Jr., “although with efficiencies and wider shoulders — 16 foot shoulders towards the median barrier and 12 foot shoulders along the outside — we'll have room for breakdown vehicle lanes and emergency vehicle passage at all times. These changes will improve traffic flow and meet current Federal Highway Standards and reduce bottlenecks that frequently occurred through this section of highway. We are eliminating the quarter-mile between southbound on and off ramps [the Exit 44 loop ramp] with a new intersection known as Exit 44.”

The traffic management plan is based on three major traffic shifts planned for I-95 as the work progresses. This includes increased line striping and signage, and traffic alerts issued to warn drivers of the shifts in advance via ConnDOT Web sites, press releases and media outreach, as well as public informational meetings supported by DOT officials.

Tom Wood, Middlesex's project manager since the beginning, is pleased with the progress of the work. Thus far the following has been accomplished: completion of the new Northbound Barrel of the West River Bridge and the Ella Grasso Bridge; shifting of the southbound traffic to the old Northbound structures; demolition of the existing southbound structures; foundation piles and substructure of the new West River Bridge; and various local roadway and ramp improvements.

“Each of the two structures [is] a pile supported design with 16-inch square prestressed concrete pile,” said Wood. “Initial design lengths ranged from 67 feet to 95 feet. However, after the initial testing, the production pile lengths increase to a maximum of 108 feet. In addition, the 24-hour restrike on the test piles increased to seven days. This significantly delayed the ordering of production piles. To anticipate this on the next stage, we worked together with ConnDOT and their design team to allow the test piles for stage two to be driven during stage one. To accomplish this, the access to the test piles required the installation of the stage-two trestle and to install the piles outside of the proposed footing. This allowed the designer to issue the production lengths and fabrication of the pile during stage one and to have the stage two material ready for installation prior to the completion of stage one.”

To keep traffic flowing, one side of the existing bridges is maintained while the other side is demolished and rebuilt. After completion of stage two there will be traffic sandwiching the stage three work area, which will present a whole new list of challenges.

“The main span, which is approximately 1,200 feet, took less than one month to remove the concrete deck and steel girders,” said Wood. “The first phase of the main span began in February 2015 and finished in June 2015. Stage two we anticipate taking a month less.

“The project team prepares a job hazard analysis [JHA] before any activity is started,” he added. “The JHA identifies the hazards and recommends the preventative action or procedure to eliminate the hazard. The JHA is then reviewed with all the team members before the activity begins. It also is the company's policy that any team member has the authority to stop an activity if he or she identifies an unsafe act.”

Preventing material from the demolition and construction from falling into the water and the ground is crucial.

“More than 50 percent of the main span is over water and an active marina,” said Wood. “We use a combination of multiple methods, solid oak timbers supported between the girders, suspended netting, solid work platforms, polyethylene sheeting, steel cofferdams and turbidity booms. We also have to test the PH level of the water being pumped from the cofferdams and chemically adjust the level to the specification levels before it is discharged into the channel. We installed a series of holding tanks to store and treat the water.”

“The existing topsoil passed and is being used on the slopes,” said Wood. “This project required a total of 55,210 cubic yards of fill used as 'pre-load.' This pre-load material needed to sit in place to assist the wick drains in an effort to compact the material. In some cases, up to one year. To accomplish this we developed a detailed matrix for each of the phases of construction understanding the volume of material generating from the roadway, utility and structure excavations. We were able to limit the material from outside sources and exceed the expectations of the ConnDOT. In addition, we received approval to widen the limits of the proposed slopes further reducing the quantity of material being hauled and disposed of off site.”

The delivery of the prestressed piles presented some challenges as the structural steel, steel finger joints and bridge bearings had long lead times in terms of manufacturing.

Middlesex's nearest main corporate yard/shop is 132 mi. (212 km) away, however all minor repairs and maintenance is conducted on site and for this project, it has one onsite mechanic.

“The schedule and the budget do not have activities for equipment downtime,” said Wood. “It is imperative to have the equipment running properly at all times. Being from New England, we are experienced on how to treat and prepare the equipment, fortunately this winter has been a breeze.”

Commenting on the work of the company that built the original bridge, Wood said: “The work they did is amazing given the resources and technology they used to what we have today. Hopefully in 50 years the next group can say the same for us.”