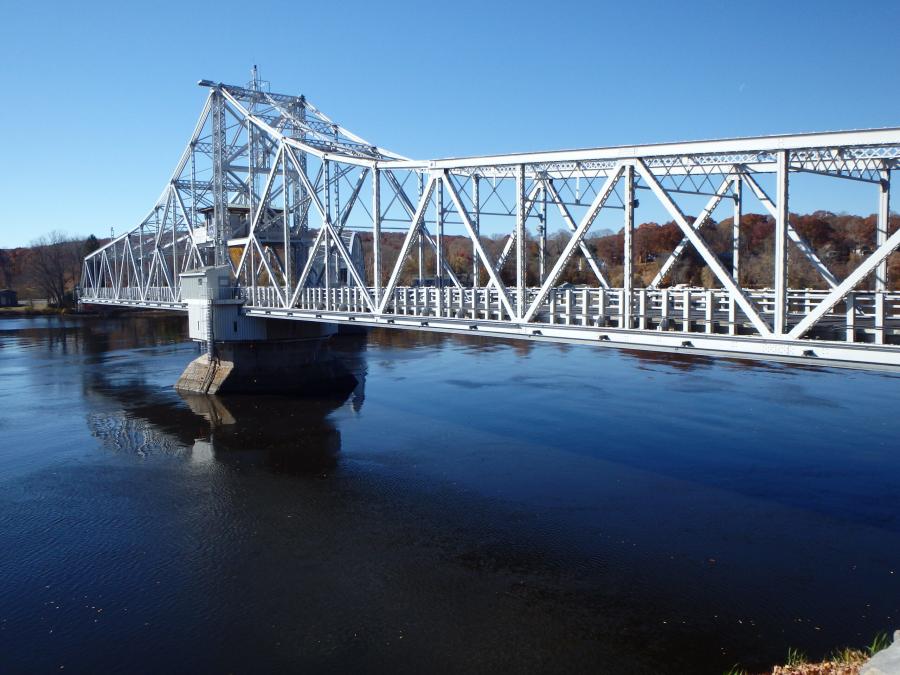 The bridge totals approximately 885 ft. in length. At the time it was built, the movable bridge was believed to be the largest of its kind.

Connecticut will launch a two-year, $58.2 million project in the spring of 2022 to overhaul the East Haddam Swing Bridge, which carries Route 82 over the Connecticut River, connecting the town center to neighboring Haddam.

Improving the 108-year-old structure is estimated to be complete sometime in the fall of 2024.

The bridge totals approximately 885 ft. in length. At the time it was built, the movable bridge was believed to be the largest of its kind.

The state Department of Transportation (CTDOT) initiative is intended to improve safety and access, as well as operations for vehicles, pedestrians and bicyclists traveling on CT 82.

CTDOT's online page dedicated to the East Haddam Bridge overhaul noted that the work will "include a major rehabilitation of the bridge to extend service life, improve roadway rideability for traveling public and improve swing span operation reliability."

The bridge was built in 1913 and rehabilitated in 1988, 1998, 1999 and again in 2007. Due to significant swing span operation problems, an emergency repair project was completed in 2016. Inspections by CTDOT's Bridge Safety and Evaluation unit have determined that the bridge is in poor condition, primarily due to the deterioration of its superstructure, CTDOT noted on the structure's project page at the agency's website. When completed, the rehabilitated bridge will maintain a safe crossing of the river for vehicular and pedestrian traffic.

The overall project's limits begin on the west side of the Connecticut River at Little Meadow Road, continue over the bridge, and end west of the Goodspeed Opera House in East Haddam.

The Middletown Press reported that CTDOT Supervising Engineer Derick Lessard said in an August meeting of the Middletown County Chamber of Commerce Haddam & East Haddam Division that the transportation department is taking into consideration surrounding businesses that will be affected by the work.

He told the newspaper that a residential driveway at Little Meadow Road and CT 82 will be used for equipment staging, with another to be built on the southern part of the same homeowner's property.

Part of the bridge overhaul will be conducted during peak boating season, Lessard said, but noted that CTDOT will always provide passage for boats to go underneath the structure. That includes smaller vessels that can fit under the span without the bridge needing to pivot.

Boat traffic presently flows under Span Three of the East Haddam Bridge, but he said that "there are times during this process when the navigation channel will have to be closed," which will temporarily redirect vessels traveling on the river to cross under Span Four.

The project calls for floor beam and deck replacements on its first two spans, as well as bearing and joint replacements, substructure repairs, a full replacement of the electrical system and upgrading the mechanical system, which will make the swing operation "more viable," Lessard said.

In addition, a 6-ft. sidewalk will be added on the southern side of the bridge.

Lessard anticipates there will be a 20 percent reduction in the swing span "cycle" time once construction is complete, the Middletown News reported.

"There will be some hang-ups and problems," Chamber President Larry McHugh said at the August meeting, but added, "we will work those problems out."

Signs will be posted in the surrounding area warning motorists of the bridge project in advance of the project next year, including at the intersection of CT 151/82 and the crossing at CT 82/54, according to CTDOT.

At least a 14-day closure notice will be posted for any construction, explained Lessard. Like work on the Arrigoni Bridge, the next span upstream in Middletown, there will be alternating one-way traffic 24 hours a day during the project timeline, he noted, adding that the East Haddam construction will continue throughout the year, even during the winter.