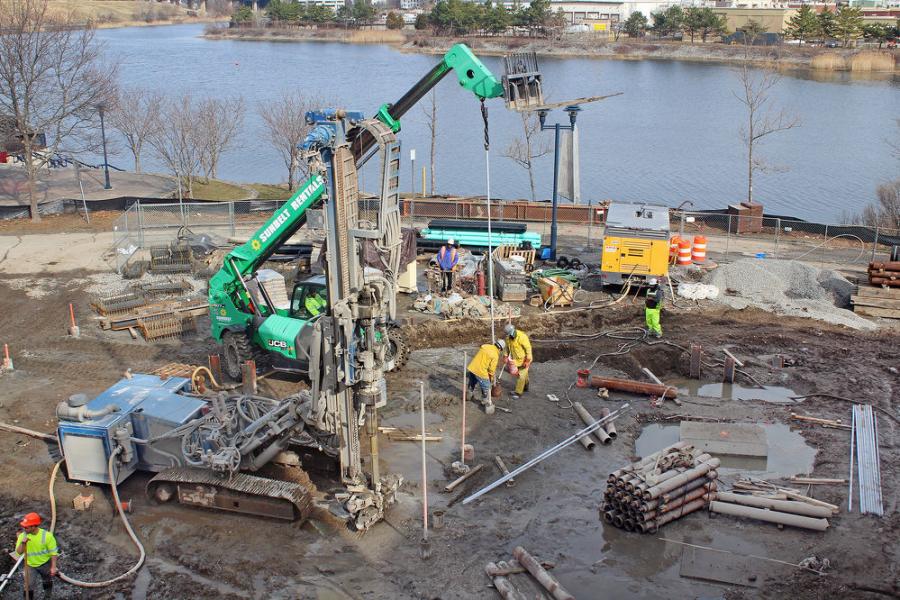 The multi-year replacement of the bridge, expected to begin in 2021, requires removal of the aquarium’s iconic IMAX Theater to allow for room to work. (The Maritime Aquarium photo)

A popular New England tourist attraction is undergoing major changes. Work is under way on a new seal exhibit and 4D theater at Connecticut's Maritime Aquarium at Norwalk, in response to the scheduled reconstruction of a railroad bridge adjacent to the facility.

"Two historic structures are at play here," said Dave Truedson, Maritime Aquarium's chief operating officer. "There's the aquarium's primary brick building, which opened in the 1860s as an iron-works factory on the Norwalk River, and the Walk Bridge, a swivel railroad bridge built in the 1880s to span the river. 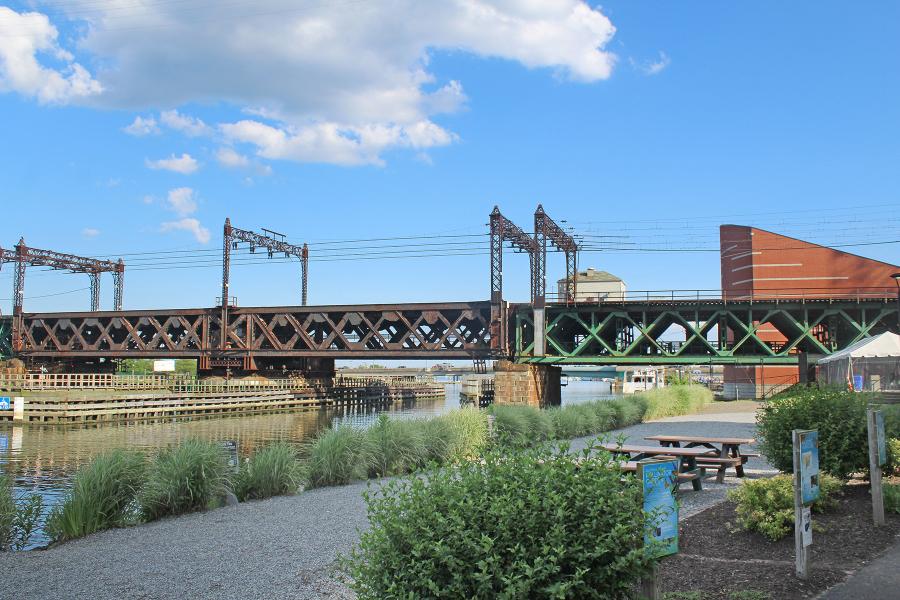 "The Walk Bridge runs tightly between the aquarium's primary building and its IMAX Theater, which was built new for the aquarium's opening in 1988. The Walk Bridge has lasted beyond its expected lifetime, and has stuck open in recent years, shutting down MetroNorth's New Haven Line and Amtrak's Northeast Corridor. The multi-year replacement of the bridge, expected to begin in 2021, requires removal of the aquarium's iconic IMAX Theater to allow for room to work."

In addition, the aquarium's harbor seals exhibit — an indoor-outdoor display that's a centerpiece of the facility — would expose guests and seals to noise, vibration and potential debris from the bridge construction project.

The aquarium reached a functional replacement agreement with the city of Norwalk and state of Connecticut in late 2018 that will fund construction of the new movie theater adjacent to the main entrance, and fortify elements of the aquarium to be impacted during the bridge work, primarily the construction of a larger, enclosed seal exhibit and the relocation of an exhibit of African meerkats.

Truedson noted that it's crucial the projects be completed before the bridge replacement begins in 2021, for both the safety and enjoyment of guests and the animals.

"Minimizing the significant economic damages that will occur due to the bridge project is critical if the aquarium is to remain one of the state's largest tourist attractions and an economic driver for the city and state."

The aquarium welcomes approximately half-a-million guests each year, primarily from the tri-state area. Some 80,000 school students tour the aquarium during field trips, or receive visits to their schools by the aquarium's "traveling teachers". 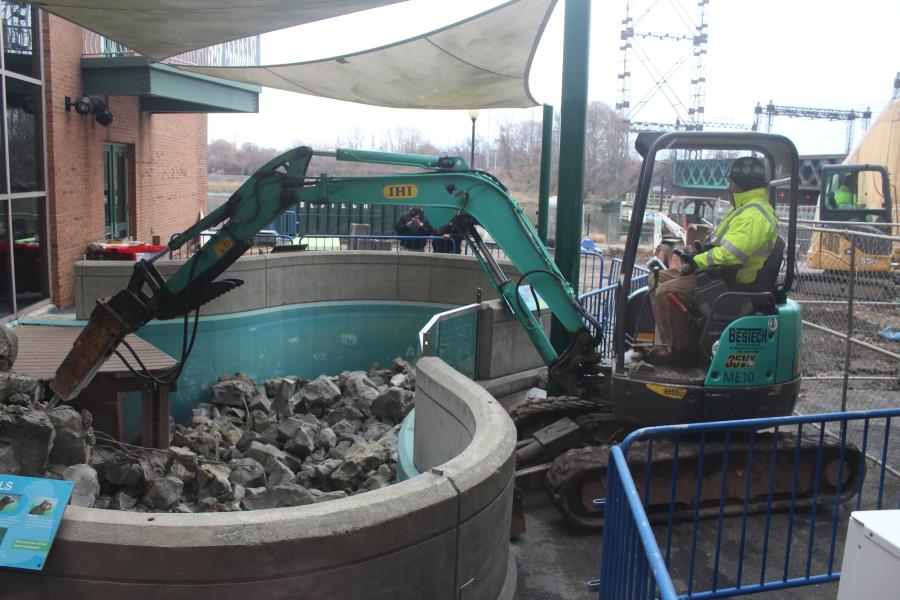 "The Maritime Aquarium is a bit different from many aquariums, in that we focus primarily on one body of water, the Long Island Sound," said Truedson. "Some 300 species are displayed, and nearly all are native to the Sound and its watershed. Guest favorites include the sand tiger sharks, harbor seals, sea turtles, river otters, octopuses and jellies.

"Our staff and our guests are excited about the new seal exhibit, which will be two stories high and fully enclosed by a new exterior wall. At 150,000 gallons, the seals' new home will be The Maritime Aquarium's largest exhibit, seven times bigger than the original."

Regarding construction of the new seal tank, Truedson said the first and most important task is making certain guests know the seals are still on site. This is accomplished through signage and guidance by volunteers and guest-services staff.

"From a construction standpoint, in order to expand the seals' home from a 20,000-gallon exhibit to a 150,000-gallon exhibit, a new connection to the street sanitary sewer line is necessary. This has required laying the line directly through our main hall, which serves as a central hub for guests.

"Completely closing the hall to lay the line was impractical. Half our exhibits would be inaccessible to guests, so the work was done in two segments. Each segment required erecting tall construction walls in the hall. Fortunately, this work occurred from mid-January to mid-February, which is a time of low visitation. Also, guests who did visit during this time have been very understanding about the temporary white walls, and excited to learn about the new seal exhibit."

In November, the seals moved into a 30,000-gallon exhibit that was the former home of the aquarium's "Go Fish" exhibit, which featured historically important game/commercial fish species.

"Seals commonly come out of the water to rest, so relocating a seal is not as time-critical as with dolphins or whales. Our animal husbandry staff has worked with the seals for many years in getting them comfortable coming out of their exhibit for individual medical treatments, when needed, and as a group, for safety, when Superstorm Sandy approached our area.

"For this move, the seals all willingly came out of their exhibit and, because a stairway was involved, they were transported to their home-away-from-home in large dog crates. Staff observation is that the seals have shown more activity since the move, quickly adjusting to their larger, deeper temporary quarters. 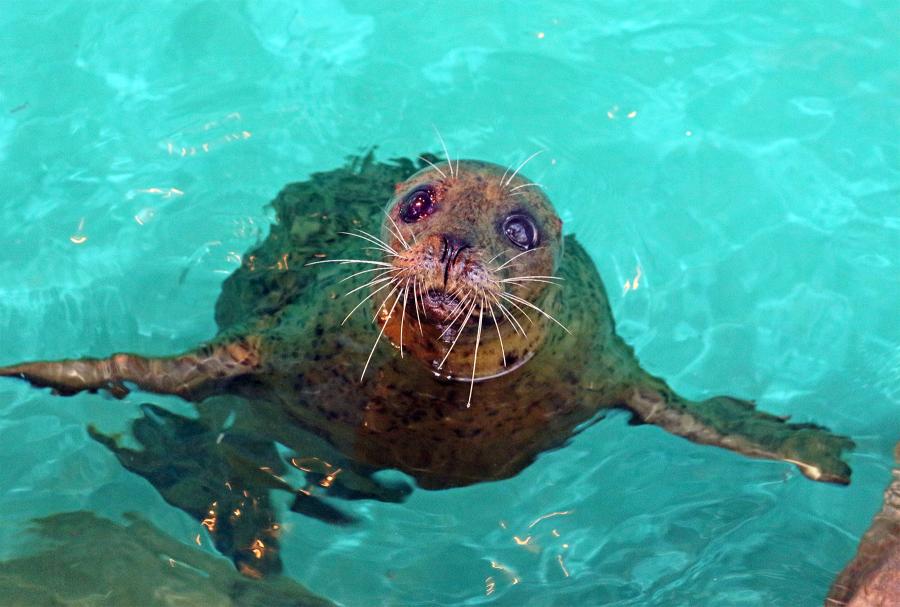 The aquarium is home to five female harbor seals, a species that commonly migrates into Long Island Sound each winter.

"The seals' dog-like faces and graceful aqua-batics give them great appeal, which is why a seal is the animal featured in The Maritime Aquarium's logo," said Truedson.

The current six-story screen theater, the first IMAX theater built in the state, will remain operational until the new 4D theater is opened in late 2020. In early 2021, the old structure will be demolished.

The project is a joint venture between AP Construction and O&G Industries. Work began in November 2019, and will be completed by December 2020. Before construction could begin, a parking lot had to be removed, requiring the proper handling of contaminated soils.

"The other primary demolition involved jackhammering the existing seal tank," said Frank Fazekas, project manager, AP Construction. "That was a Hazmat operation, due to the PCB-laden waterproofing material that had been applied over the concrete structure."

Virtually all the soils disturbed during demolition were contaminated. The proper removal, storage and disposal was a priority.

"Our erosion control measures required regular maintenance due to the close proximity of the Norwalk River to the job site," said Fazekas. "Since the project was situated on a turn-of-the-century industrial area, we routinely discovered underground utilities that were not on any of the plans."

Other unexpected issues included finding buried foundations across the entire area and stumbling upon new foundation conditions, which sometimes clashed with plans for new foundations and necessitated redesign.

As for the main challenges on the job, "The first is performing our work at a facility that is open 363 days a year, welcoming some 500,000 visitors," said Fazekas. "We are required to work around the aquarium's daily operations, without disrupting them in any way. The second is the site itself. The work areas are very tight, and there is no extra room for things like laydown or staging."

Currently, crews are continuing excavation and driving the remaining piles for the seal tank. There will be approximately 180 piles driven. 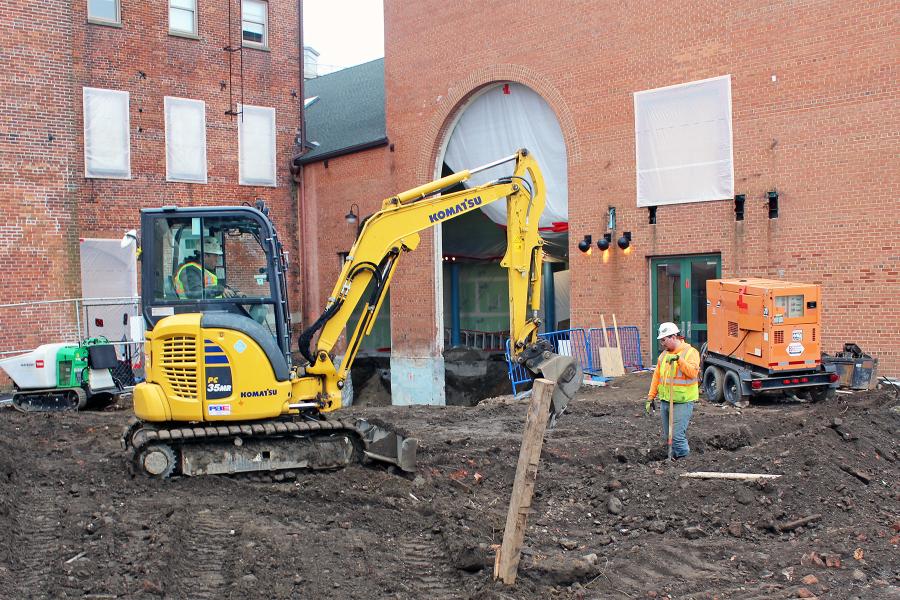 So far, the elements have not been a problem for workers. There were some wet conditions, but generally the mild weather has been helpful.

An estimated 2,500 to 3,000 cu. yds. of dirt will be moved on the project, which involved razing a playground to make way for a temporary entrance across the street from the parking garage. Permanent asphalt ADA-compliant ramps and a sidewalk have been built.

At this time, work on the majority of the project remains. The next scheduled milestones include the start of steel erection in the theater area in April, and completion of the pile driving for the seal tank and the foundation in preparation for structural steel in June.

The primary equipment on site includes Hitachi ZX85USB-5N and Wacker WL280 excavators. There also have been three different pile driving machines on the premises to install H, micro and helical piles. These include a Junttan PM25 pile driving rig and HHK4 hydraulic impact hammer.

The primary materials for the seal tank are more involved.

Complications arose when the habitat was found to be not a few inches of shotcrete applied over a few inches of foam, as expected, but solid shotcrete that varied from 12 to more than 24 inches in thickness. Crews had their hands full, but managed to push through.

"We are experienced in building aquatic environments," said Breidenbach. "Constructing the new tank relies on conventional construction methods, but also involves the sourcing, scheduling and accommodation of specialized treatments, fixtures and systems.

"The foundations for the seal tank have thus far been the most complicated and time-consuming portion of the project. Differing site conditions, existing foundation discoveries and required redesign work have added time to our schedule, and required us to modify our work staging to maintain momentum."

Despite the amount of construction involved, Truedson said the end product is worth the wait.

"It's great to see these projects finally get under way after years of negotiations and design work. However, the real reward will come at completion." CEG