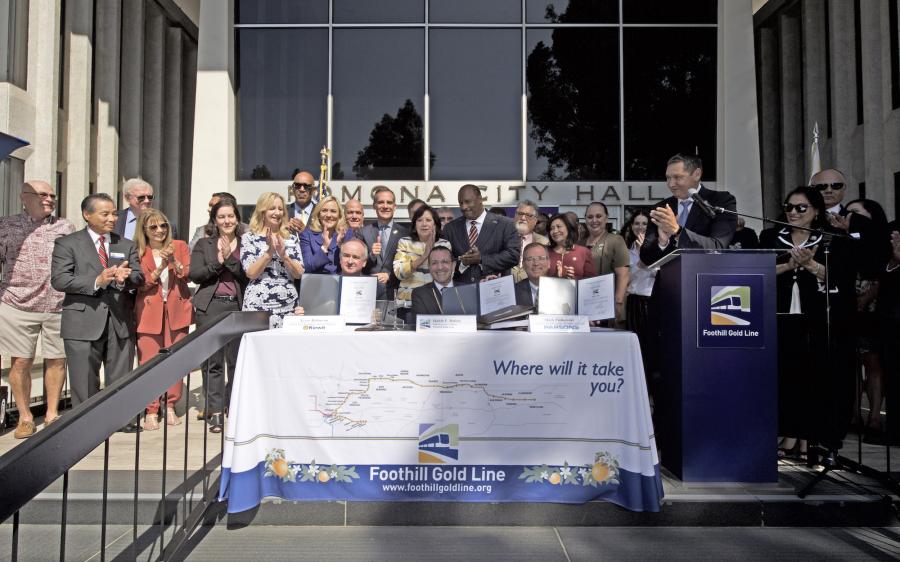 The Foothill Gold Line Construction Authority (Construction Authority) held a press conference on the steps of Pomona City Hall to sign the Alignment Design-Build Contract for the 12.3-mi., six-station Foothill Gold Line light rail project from Glendora to Montclair. The contract with the Joint Venture team of Kiewit-Parsons includes an $805.6 million base scope for the first nine miles of the project from Glendora to Pomona, with a two-year contract option to complete the full project to Montclair for a total contract amount of $1,186.9 million if additional funds are secured by October 2021. The extension will add new stations to the Metro Gold Line system in the cities of Glendora, San Dimas, La Verne, Pomona, Claremont and Montclair, and may be built in phases if the additional funding is not secured in time to initiate the contract option. The Glendora to Pomona segment is anticipated to be completed in 2025, and the entire project to Montclair by 2028 if the contract option is initiated.

"Today, as we sign the contract that kicks off major construction for the next Gold Line segment, we are one step closer to improving mobility and the quality of life for hundreds of thousands of residents, workers, students and others as they travel to and from the San Gabriel and Pomona Valleys each day," said Foothill Gold Line Construction Authority Board Chair and Pomona Mayor Tim Sandoval. "Getting to today's contract signing would not have been possible without the partnership and collaboration with LA Metro's board and executive team; and the support of elected officials at all levels, including the San Gabriel Valley Council of Governments and the State of California that provided hundreds of millions of dollars of funding that helped make today possible."

The contract signing with Kiewit-Parsons concludes a two-year procurement process and officially marks the beginning of major construction for the $2.1 billion light rail project. Kiewit-Parsons, the same design-build team responsible for successfully building the two earlier segments of the Foothill Gold Line between Union Station and Azusa, was ranked the top team in all technical categories by the evaluation committees, as well as provided the lowest overall bid price. They were deemed the best value for the agency when they were awarded the contract in mid-August.

"Kiewit is excited to have been chosen to build this important rail transportation project in the region," said Terry Robinson, senior vice president, Kiewit Infrastructure West Co. "Our long, successful history with the Foothill Gold Line Construction Authority since the late 1990s will only help the Kiewit-Parsons team as we closely collaborate throughout the life of the contract. We look forward to using our extensive rail transportation experience to safely deliver a high-quality project that commuters and those visiting the area will ultimately use and enjoy."

"We are excited to partner with the Foothill Gold Line Construction Authority and our team in delivering full-service integrated delivery including design and technological capabilities that will benefit travelers across the LA Metro service area," said Mark Fialkowski, executive vice president of mobility solutions, Parsons Corporation. "Parsons will provide innovative, sustainable solutions that reduce traffic congestion and improve air quality, while helping San Gabriel Valley commuters get to their destinations safely and reliably."

The Glendora to Montclair project is named as one of Metro's 28 priority projects to be completed before the 2028 Olympic Games in Los Angeles and is the fourth rail project currently in major construction in the county. It will provide connections to important regional destinations like the LA County Fairplex, two dozen more colleges and universities, historic downtowns, museums, regional parks and open space areas and much more. In addition, the extension will provide a direct link between the Metro and Metrolink systems, allowing riders from each system to easily transfer; creating endless possibilities for connections throughout the region.

It is estimated that during construction alone, the Foothill Gold Line from Glendora to Montclair will create as many as 16,000 jobs and up to $2.6 billion in economic output for the region, as well as up to $1 billion in labor income and potentially $40 million in tax revenue (according to an economic study by Beacon Economics). Once completed, the line is estimated to add more than 18,300 riders to the Metro system every day.