APTA Board of Directors at the groundbreaking ceremony for APTA’s new headquarters. (APTA photo)

Let the construction begin … current and former APTA leaders gathered in Alexandria, Va., to celebrate the groundbreaking of APTA Centennial Center, a 7-story, 115,000-sq.-ft. building that will be the association's headquarters beginning in 2021.

The building will support APTA's workforce of the future and better serve the evolving needs of the association's members. But Sharon Dunn, APTA president, noted that it's also a testament to APTA's proud history.

"Today marks a culmination of decades of vision, dedication, and leadership," Dunn said at the groundbreaking ceremony. "Today is possible due to the legacy of past leaders in the American Physical Therapy Association. It is a legacy of stewardship and of investing in the next generation."

The investment is more than symbolic. An exploratory work group of APTA members discovered that the cost of adequately renovating APTA's existing headquarters — the association's national home since 1983 — would be similarly expensive with only a marginal increase in asset value for the association. By selling the current buildings, which are likely to be redeveloped into more valuable mixed-use properties, APTA was able to capitalize on the opportunity provided by constructing a new headquarters that is more consistent with the association's values and business needs. 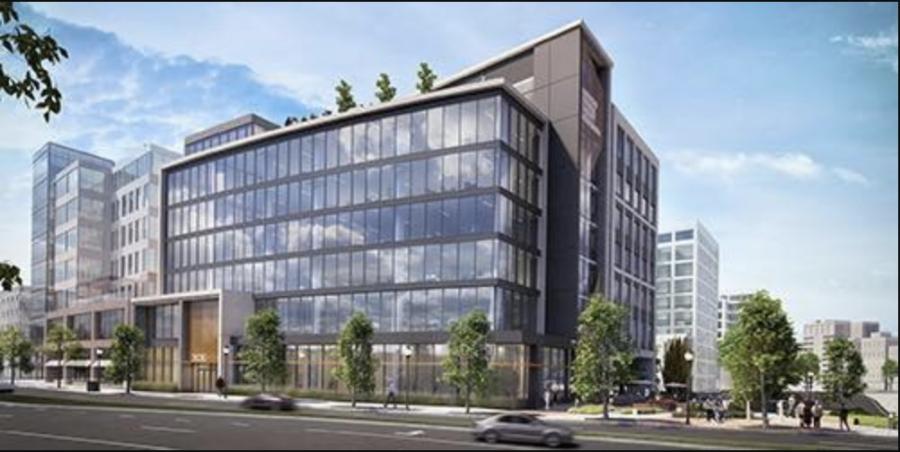 APTA Centennial Center will be many things that APTA's current headquarters are not. For one, APTA staff will be able to occupy a single building, spread out primarily across 2.5 of APTA Centennial Center's seven floors, rather than divided across multiple smaller buildings, as currently. The new building also will be more accessible to those who use public transportation, with a new Metrorail station being constructed just across the street (APTA's current headquarters is one mile from the nearest Metrorail station). APTA Centennial Center will better promote movement and health in its physical presentation and its connectivity to paths that promote active transportation and exercise.

The association anticipates that APTA Centennial Center will be a LEED-certified "Silver" facility that meets environmental sustainability standards, and that it also will receive the highest certification from FitWel, a program that recognizes the ways a building encourages fitness, social equity, more healthful food options and other factors that contribute to a healthier workplace.

"Our new headquarters will serve as a continual reminder of APTA's dedication to health, wellness, and rehabilitation, community-building and collaboration, and social and environmental responsibility," Dunn said. "It will be a place where staff, members, and visitors can feel empowered to work toward shared goals in a setting that exemplifies our shared values."

Association and community members who visit APTA Centennial Center will find more space for them, from a ground floor that is likely to include temporary exhibits to a top floor that significantly expands APTA's conference and meeting space, including a partial roof terrace.

Also encouraging for the long-term value of the association's new property is its burgeoning location. APTA Centennial Center is part of a National Landing region that will include Amazon's new Virginia headquarters, plus a $1 billion Virginia Tech Innovation Campus that will be just down the street. Nearly completed and beginning to be occupied is a new headquarters for the National Industries for the Blind, which will sit next to APTA Centennial Center.

"This building is an investment in our future and in the Alexandria community that APTA has called home for 36 years," said Justin Moore, APTA chief executive officer. "It's also a commitment to best serve the physical therapy profession, and to empower our members to pursue APTA's vision of transforming society by optimizing movement to improve the human experience."

APTA anticipates occupying the building in January 2021, as the association begins its centennial year.