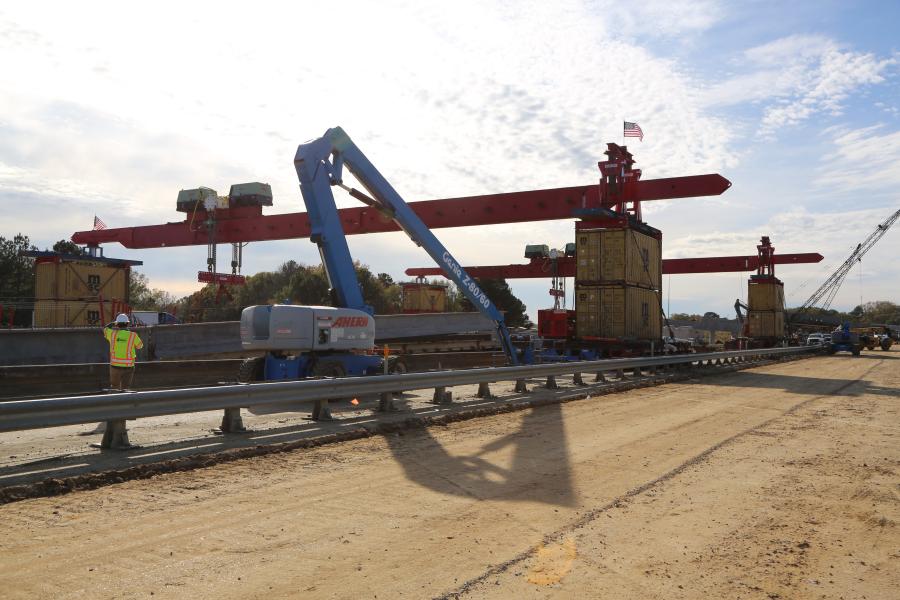 Crews in Jackson, Miss., are nearing completion on a bridge replacement project that made use of a self-propelled modular transporter (SPMT) lifting frame for the first time in Mississippi Department of Transportation (MDOT) history. (MDOT photo)

Crews in Jackson, Miss., are nearing completion on a bridge replacement project that made use of a self-propelled modular transporter (SPMT) lifting frame for the first time in Mississippi Department of Transportation (MDOT) history. The $42 million effort has primarily focused on the I-20 Eastbound Bridge 44.9B that spans over U.S. 51, I-55 South and Canadian National / Illinois Central Railroad in Hinds County.

"The existing bridge was constructed more than 50 years ago," said MDOT chief engineer Brian Ratliff. "Multiple inspections revealed the bridge had experienced fatigue cracking in various steel members and concrete elements of the bridge. Overall, it was determined the structure had reached its useful service life and needed to be replaced." 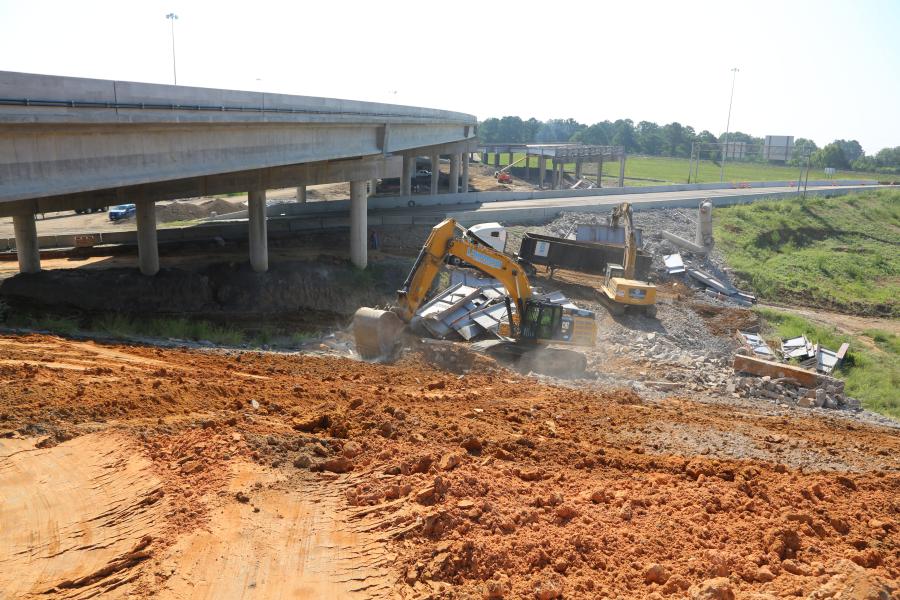 Nearly a decade ago, there was a similar structure experiencing the same deterioration.

"It was happening so rapidly that we almost had to close that bridge before we could get it replaced," said Ratliff. "Once we started seeing similar issues on this bridge, we got ahead of the game and got it replaced before it could become a major problem for the traveling public. By closing the less traveled State Street, we were able to shore up the westbound bridge. The critical span that was failing was over the ramp to I-55, and we wanted to avoid closing that connection at all cost."

The project is located between Terry Road and Gallatin Street. Ratliff described it as a major investment, with the public benefitting from the outcome.

"Safety is our number one priority, and we're obligated to provide drivers with the best roadway conditions. Also, this is influential toward attracting more commerce and tourist opportunities for the state. Completion of the project means drivers will experience safer, more comfortable travel conditions that will last for years to come."

An average of 121,000 vehicles from I-20 eastbound and I-55 northbound travel the area every day.

"We have performed all the necessary actions to keep many of our roadways open and available to the public during construction," said Ratliff. "By sufficiently using advance warning signs, detours and traffic alerts, we have helped inform traffic and guide drivers through the work zone. So far, we have had positive outcomes for motorists during every traffic phase."

Work has included building a larger, adjacent bridge and demolishing the existing structure. The job required new construction and widening along I-20 eastbound and I-55 northbound for the new bridge and roadway alignment and ramps. This allowed traffic to be shifted during various phases of construction and provided new accesses for the proposed alignment. It generally consisted of chemically treating the existing subgrade material, installing crushed stone and paving lifts of asphalt pavement.

The project was awarded to Key LLC. Work began in March 2020, with construction expected to be completed by late spring or early summer.

Work is in the second phase, with preparations made for safety fences and concrete median barriers. Drainage and stabilization along the railroad corridor is in progress, as well as installation of electrical and ITS components in Hinds and Rankin counties.

One of the construction milestones has involved the use of the SPMT lifting frame to raise the massive 170-ft. beams over the railroad. 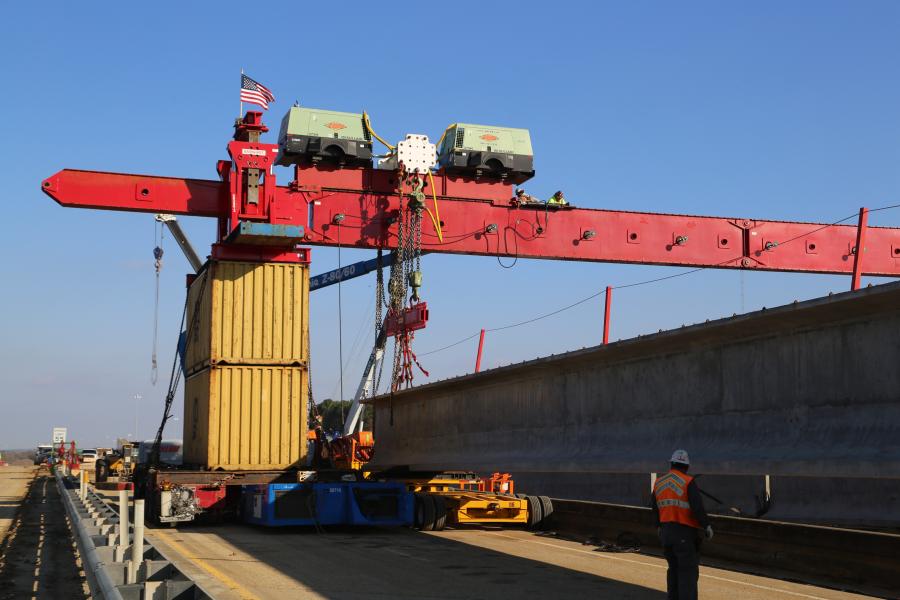 "The SPMT lifting frame was the best overall and safest solution for installing the girders that spanned the railroad," said Ratliff. "This system was remarkable to observe, and it did not affect the railroad or traffic. The entire operation was a complete success."

Crews spent roughly two weeks getting everything ready to set beams. After mobilizing equipment, they relied on cranes and lifts to assemble the components for the gantries. Because of the large loads, the existing bridges' load carrying capacity had to be analyzed. They also spent time verifying their layouts and grades on the bridges.

According to MDOT project engineer Zachary Horton, crewmen with safety harnesses ensured the beams were set in the correct positions.

"There are a total of 93 prestressed concrete beams installed for the new bridge. Seven 84-inch-tall beams span directly over the railroad. Each beam was delivered to the project by trucks with heavy-duty modular trailers for extra maneuverability."

"Compared to using two cranes, this system was the best alternative for installing these beams. It drew enormous attention to the project with its unique appearance. The SPMTs sat on two existing bridges adjacent to the new structure and the pull-up gantry frames straddled the railroad. The sequence of operations was made simple, as the beams were lifted from the delivery trucks using the rig. The operators were able to laterally install the girders in place with great accuracy and control."

"They spent time verifying their grades and troubleshooting to check for proper setup. The total weight of the system was approximately 334 tons."

Placing columns, caps and beams for the new bridge required a considerable amount of planning.

"All the caps and columns were considered mass concrete," said Horton. "This meant the concrete temperature and temperature differences between the structure's surface and center had to be closely monitored and controlled during the initial curing period of three to seven days. The contractor monitored these temperatures by using sensors that were installed before concrete was poured. The forms were completely wrapped with layers of concrete insulation blankets to provide thermal control. 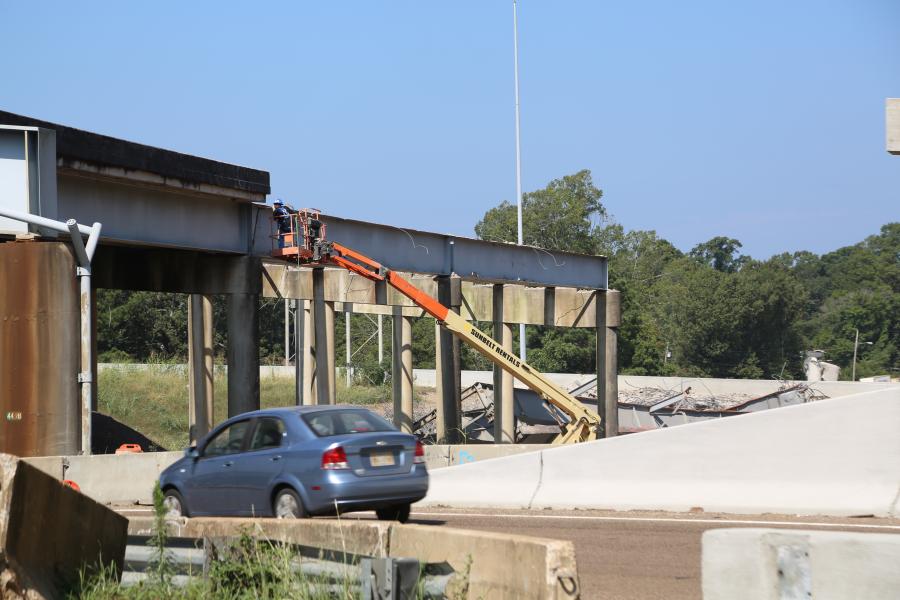 "Following the completion of concrete drilled shafts, the contractor would proceed with securing temporary steel column forms and installing the reinforcement cages for the bridge columns. Concrete would be placed into the forms using a concrete pump truck. Once the columns were poured, the contractor would apply its thermal control plan for mass concrete. After the thermal control plan for the columns was completed, they would begin forming for the cap and repeat these processes."

One significant task crossed off the list has been the completion of repairs toward two separate landslides. The areas were first excavated and regraded at the failed area. Then, underdrains consisting of perforated pipes, filter material and sheet drains were installed. Finally, the areas were backfilled with dirt and graded.

"Several other milestones achieved include the demolition of the existing bridge and the construction of the new roadway and bridge that the traveling public currently uses. We will reach our final milestone once traffic is in its final configuration."

Regarding the installation of drainage structures and piles for slope stabilization, "Some of the drainage structures included various sizes of reinforced concrete inlets and pipes, which were placed throughout the project," said Horton. "Along the railroad lies a network of perforated pipes and filter stone creating an underdrain system. This area is susceptible to standing water and saturation; therefore, this system will encourage positive drainage away from the slopes. The stabilization piles provide resistance to sliding and help maintain the geometry of the slopes."

The most significant excavation for the new bridge was performed during the construction of drilled shafts. The bridge consists of 50 54-in. and four 72-in. diameter shafts that provide the foundation for the structure. When performing the 72-in. trial shaft, workers drilled a hole 107 ft. below the ground surface.

"To date, we have a combined total of 80,480 cubic yards of material that has been excavated to and from the project," said Horton.

"The contractor was responsible for completely demolishing the existing structure," said Horton. "This involved removing the various elements below the final ground line and hauling away all the concrete and steel debris. As some portions of the bridge spanned over interstate ramps and roadways, we established temporary weekend closures to allow the contractor to safely and quickly demolish the bridge. Operations began August 16, 2021, after traffic was swapped onto the new bridge."

"Full-size and mini- track excavators [Cat] have been the most-used equipment on the project, because of their mobility and versatility. The IMT AF 180D drilling rig was used for excavating drilled shafts. Boom cranes [Kobelco CK2000 and Link-Belt 248 HLS] and lifts [Genie, Mantis and RG Lifter] were heavily used for various elements of the bridge superstructure. The Schwing concrete pump truck made it possible to pour concrete for the bridge and hard-to-reach areas of the project."

"It's confined, as we have had to work among the railroad, existing bridges and roadways. Another challenge has been minimizing interferences toward traffic. There were multiple phases in which we had to close and reconfigure lanes for an extended period while construction was in progress." 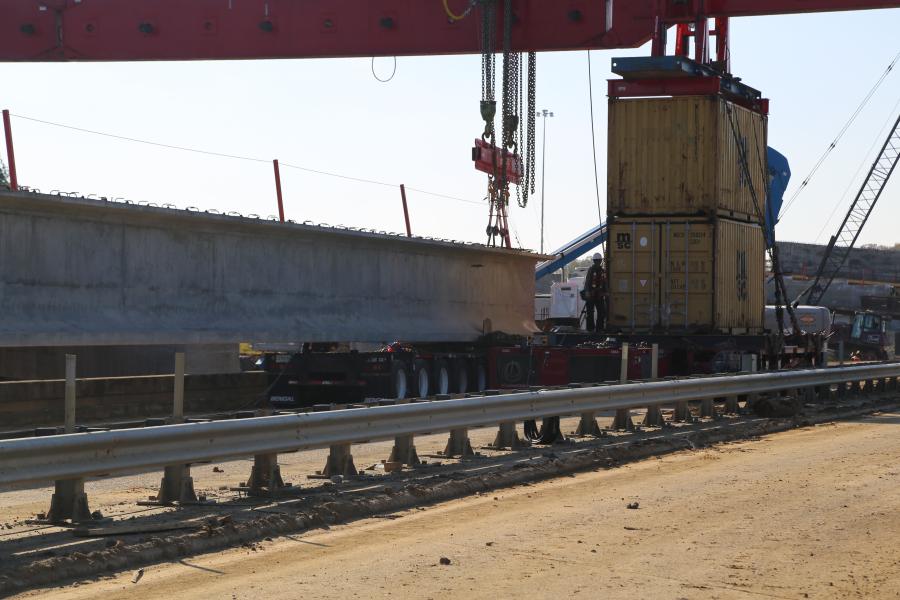 Weather also has been a factor.

"It's either allowed work to progress or come to a standstill. Rain has affected the project the most. It leaves the project's soil and roadway conditions unsatisfactory for work and slows production, occasionally for days at a time."

"It's been a great experience to be a part of the construction process and see it all develop from beginning to end. We look forward to continuing to serve the public and improve our state's infrastructures."

Ratliff added, "I would like to commend our bridge inspection program and inspectors for all they do, especially their professionalism and ethics to bring their findings to the attention of MDOT's leadership to further ensure the safety of the traveling public and freight traffic in the area." CEG