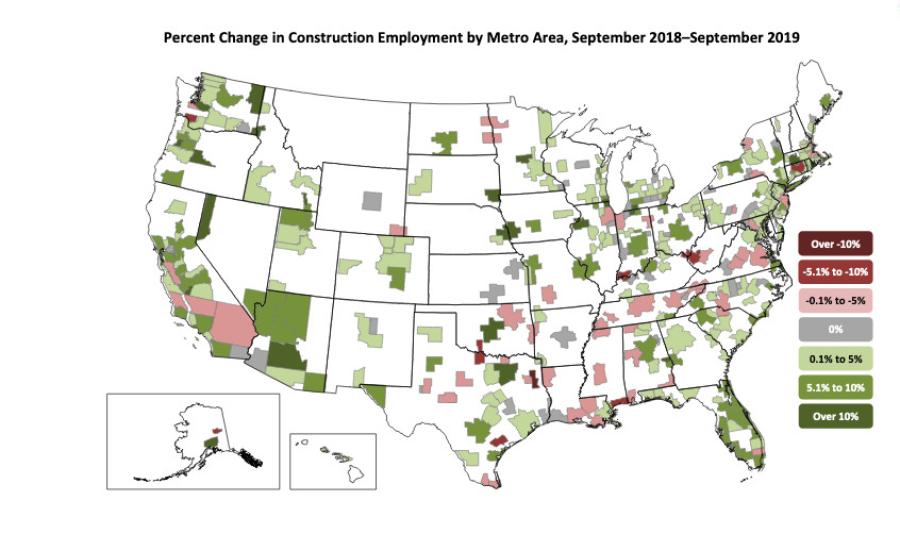 Construction employment grew in 244, or 68 percent, out of 358 metro areas between September 2018 and September 2019, declined in 61 and was unchanged in 53, according to a new analysis of federal employment data released Oct. 30 by the Associated General Contractors of America. Association officials said that despite the widespread job gains, the association's recent survey found 80 percent of contractors say hourly craftworker positions remain difficult to fill.

"Even though construction firms in over two-thirds of the nation's metro areas were able to add employees in the last year, our survey suggests employers in still more locations would have done so if they could find more qualified workers to hire," said Ken Simonson, the association's chief economist. "Job openings at construction have been at record levels in recent months, showing that contractors are still eager to hire."

Association officials said their survey documents that many firms are boosting pay and benefits, investing in more training programs and adopting new technologies and new techniques to improve efficiency. Nevertheless, many firms report they are proposing longer construction schedules and charging more for projects because of labor shortages. That is why association officials are continuing to push Congress and the Trump administration to boost funding for career and technical education, pass comprehensive immigration reform and make it easier for construction students to qualify for federal Pell Grants.