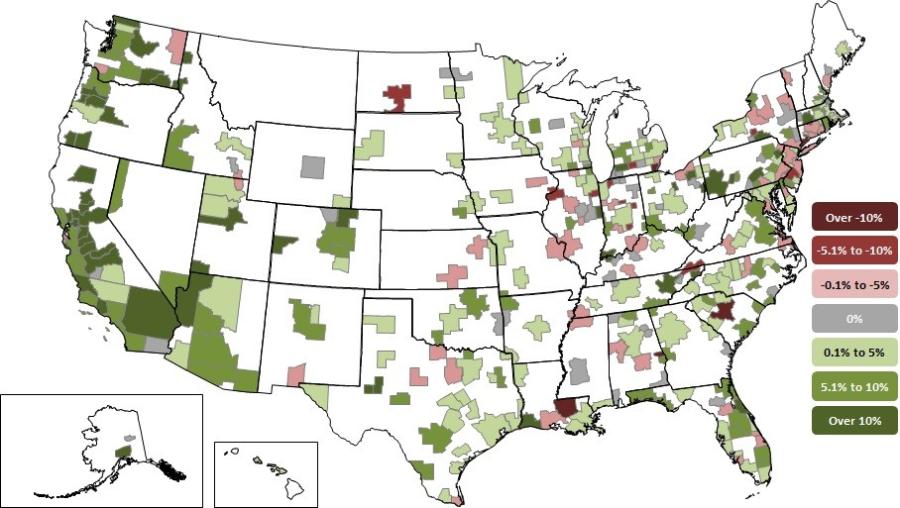 Construction employment increased in 248 out of 358 metro areas between January 2017 and January 2018.

Construction employment increased in 248 out of 358 metro areas between January 2017 and January 2018, declined in 68 and stagnated in 42, according to a new analysis of federal employment data released today by the Associated General Contractors of America. Association officials said that future construction job gains could be undermined, however, as new tariffs force contractors to pay more for steel and aluminum products and dampen demand for new construction.

"The new tariffs are already leading to increases in what many contractors are paying for steel and aluminum products," said Ken Simonson, the association's chief economist. "Most contractors will be unable to pass along these increased costs, leaving less money to invest, ironically, in steel construction equipment as well as personnel."

Association officials said that a better way to support the domestic steel and aluminum industries is to increase funding for needed infrastructure improvements. They cautioned that the tariffs announcement by the President last week would not only increase the cost of many construction projects, but it could prompt retaliatory measures from other countries that hurt U.S. manufacturers and shippers, impacting demand for new factories and transportation facilities.

"Boosting demand for their products is a much better way to strengthen the domestic steel and aluminum industries," said Stephen E. Sandherr, the association's chief executive officer. "And the best way to boost demand is to finally begin making the investments needed to improve the nation's aging and over-burdened infrastructure."