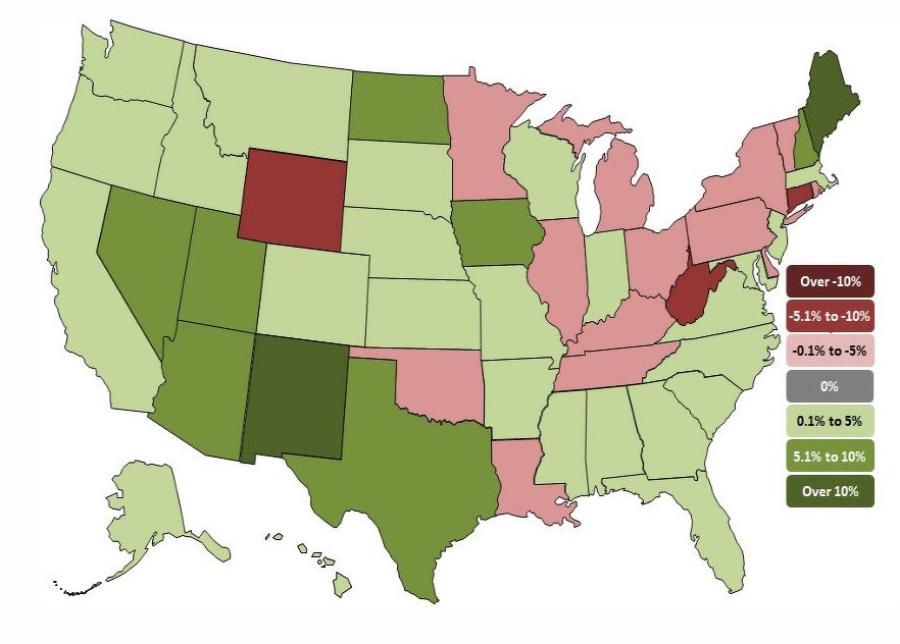 Thirty-four states and the District of Columbia added construction jobs between December 2018 and December 2019, while construction employment increased in 29 states from November to December, according to an analysis by the Associated General Contractors of America of Labor Department data released Jan. 24. Association officials added that most contractors expect to continue adding to their payrolls in 2020, according to the results of the association's annual construction forecast.

Construction employment decreased from November to December in 16 states and the District of Columbia and was unchanged in five other states. Nevada lost the largest number of construction jobs (minus 2,700 jobs, minus 2.6 percent), followed by West Virginia (minus 1,600 jobs, minus 3.5 percent) and Pennsylvania (minus 1,600 jobs, minus 0.6 percent). West Virginia also had the largest percentage decline for the month, followed by Nevada and Wyoming (minus 1.5 percent, minus 300 jobs).

Association officials noted that contractors appear optimistic about demand for all types of commercial construction in 2020, based on the results of the 2020 Construction Hiring and Business Outlook the association prepared with Sage. But they cautioned that 81 percent of firms report they are having a hard time finding qualified workers to hire. They urged government officials to boost funding for career and technical education, open new high school-level construction skills programs and allow more people with construction skills to legally enter the country to allow payrolls to continue to expand.

"While there appears to be plenty of demand for work this year, it is not certain there will be enough workers," said Stephen E. Sandherr, the association's chief executive officer. "Public officials can help more people start high-paying construction careers by simply exposing more young adults to the industry and allowing more workers into the country."

View the state employment data by 1- and 12-month rank and state map.