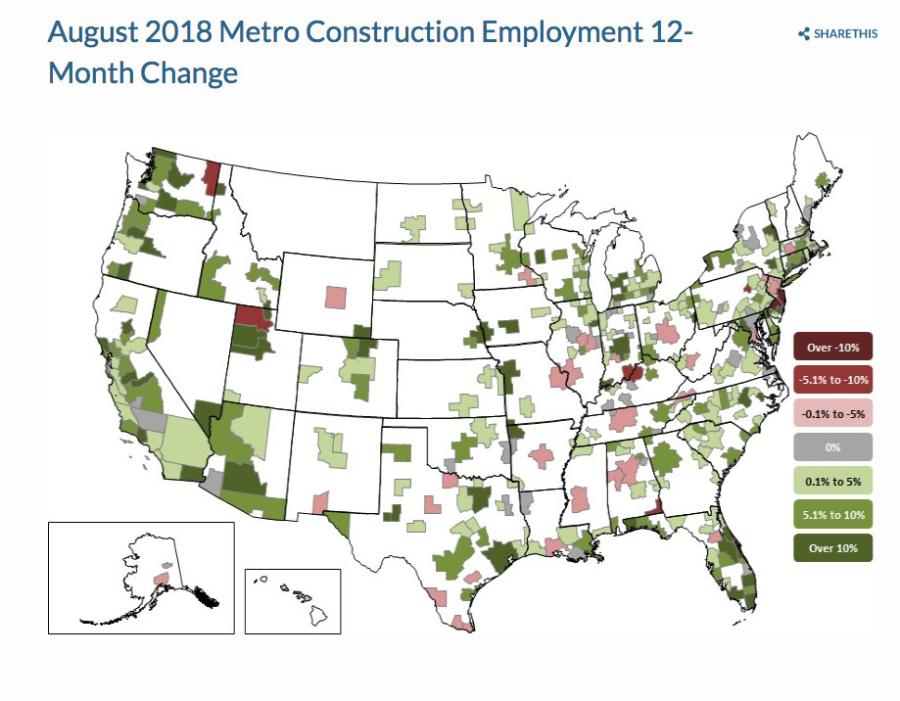 Construction employment increased in 287 out of 358 metro areas (80 percent) between August 2017 and August 2018, declined in 35 (10 percent) and was unchanged in 36, according to a new analysis of federal employment data released Sept. 27 by the Associated General Contractors of America. Association officials cautioned that further gains depend on finding enough qualified workers and urged federal officials to improve career and technical education funding and reform immigration policies.

“The increases in construction employment have been showing up in more and more metro areas,” said Ken Simonson, the association's chief economist. “Moreover, the gains should continue. Three out of four firms in our association's latest workforce survey say they plan to add hourly craft personnel in the next year. But even more firms — 80 percent — say they are having a hard time filling some or all hourly craft positions.”

Simonson noted that more metro areas added construction jobs in the past year than in any 12-month period since December 2014. The economist added that 70 metro areas reached new construction employment highs for August, including San Jose-Sunnyvale-Santa Clara, Calif., where the previous high for August was set in 2000, and Midland, Texas, which exceeded its previous August peak, in 2014, by 22 percent.

Association officials said the construction job gains are occurring as many firms are benefitting from strong demand for new construction amid lower tax rates and fewer regulatory hurdles. But they cautioned that workforce shortages are already slowing some construction projects and prompting firms to charge more for projects, according to the survey.