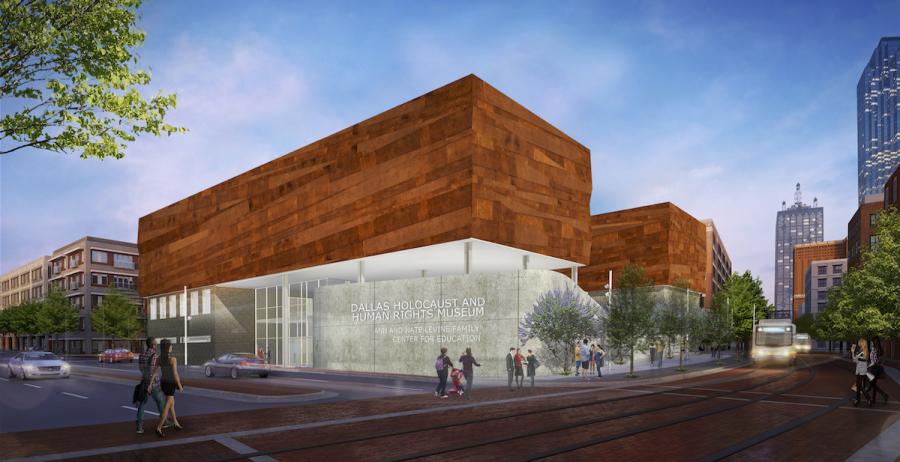 A rendering of the new museum.

Local Survivors of the Holocaust and other genocides will be recognized at a special topping out ceremony on June 13th as construction of the new Dallas Holocaust and Human Rights Museum enters its final phase.

Scheduled to open in the summer of 2019, the new state-of-the-art, 55,000-sq.-ft. facility will be unique among the nation's 21 Holocaust-related museums with an expanded examination of the Holocaust featuring dozens of video testimonies from Dallas area Survivors, along with new, in-depth technology-enriched exhibits on other genocides, human rights issues and American ideals.

The topping out ceremony will include a beam signing by Survivors, major donors and Museum officials, followed by a time capsule ceremony at which Survivors will place letters they have written about the significance of the Museum into a silver box that will be placed inside a Museum wall in perpetuity.

"June 13 will mark an extraordinary day of achievement in building our shared vision of a modern Holocaust and human rights Museum for the nation," said Mary Pat Higgins, president and CEO of the Dallas Holocaust Museum. "We are honored that Survivors of the Holocaust will join Survivors of the Cambodian and Rwandan genocides, which reflects the Museum's expanded focus on human rights, for this special occasion."

Museum Board Member Thear Suzuki, Advisory Managing Partner for the Southwest Region of Ernst & Young (EY), who survived the Cambodian genocide as a child before being resettled to Dallas as a refugee in 1981, will be a featured speaker at the topping out event. The Cambodian genocide will be a highlighted exhibition topic at the new Dallas Holocaust and Human Rights Museum.

Construction on the new museum commenced on October 10, 2017. Upon completion of the new museum, North Texas will move to the forefront of 21st century human rights education.

The general contractor, Austin Commercial, will be on site to raise the final beam. OMNIPLAN Architects of Dallas designed the new building. Berenbaum Jacobs Associates is the designer of the Museum's new permanent exhibitions.

About the Dallas Holocaust Museum/Center for Education and Tolerance

The Dallas Holocaust Museum's mission is to teach the history of the Holocaust and advance human rights to combat prejudice, hatred and indifference.