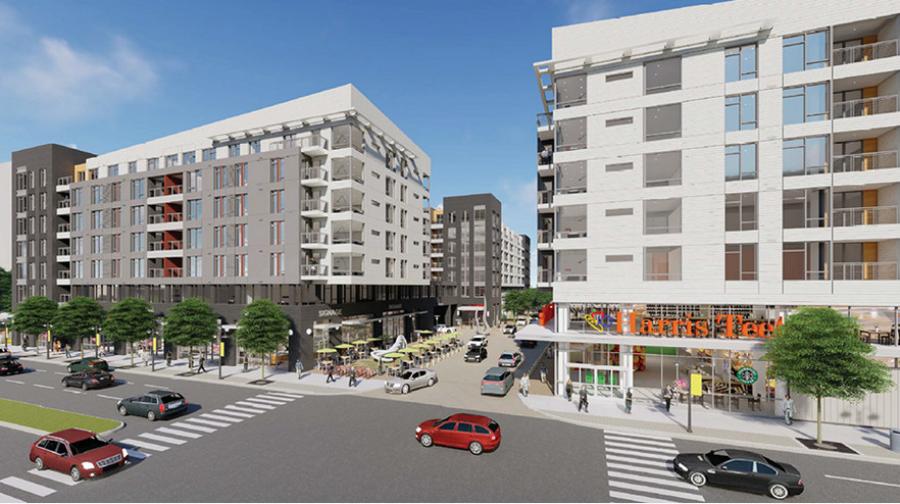 Construction has started in the Ballston neighborhood of Arlington, Va., on the future site of a new Harris Teeter grocery store, three apartment buildings (totaling 732 units) and a new green space.

"We are under way," she confirmed.

The current phase is the first of three for the six-acre site, approved in 2019. In phase one, a new 310-unit apartment building with a Harris Teeter supermarket space on the ground floor will replace the demoed structure.

During this phase, customers will still have access to parking and the current Harris Teeter on the property, which was the company's first in Virginia.

"Harris Teeter and Southeastern are very excited to be moving forward with the construction, and the community will be excited to have the new store," Senn said. "[Harris Teeter] will really do this one up as the latest and the greatest, as far as the store goes."

The new grocery store may include a bar, among other new features, and also will have covered parking, she said.

"People in Arlington, given the weather [recently], will appreciate the covered parking, which will definitely be an improvement," she added.

The timeline for the construction of the project has not changed, said the company vice president.

Phase one is expected to be complete in 2023, but Senn was quick to note that, "we'll be open before then."

During the second phase, the old Harris Teeter at the site will be demolished for new, temporary surface parking. In addition, the second apartment building, with 195 units, and the public open space will be constructed in phase two.

The temporary parking lot will make way for the third apartment building as part of phase three. It will consist of a 227-unit residential building with approximately 10,000-sq.-ft. of retail on the ground floor and two levels of below-grade parking.

The park will include a pedestrian path, dog run and picnic area, as well as natural vegetation to support pollinating insects and birds.