In the wake of the Flint water crisis, a huge spotlight has been turned on infrastructure in American, and specifically, the country’s miles-long network of aging underground water pipes. 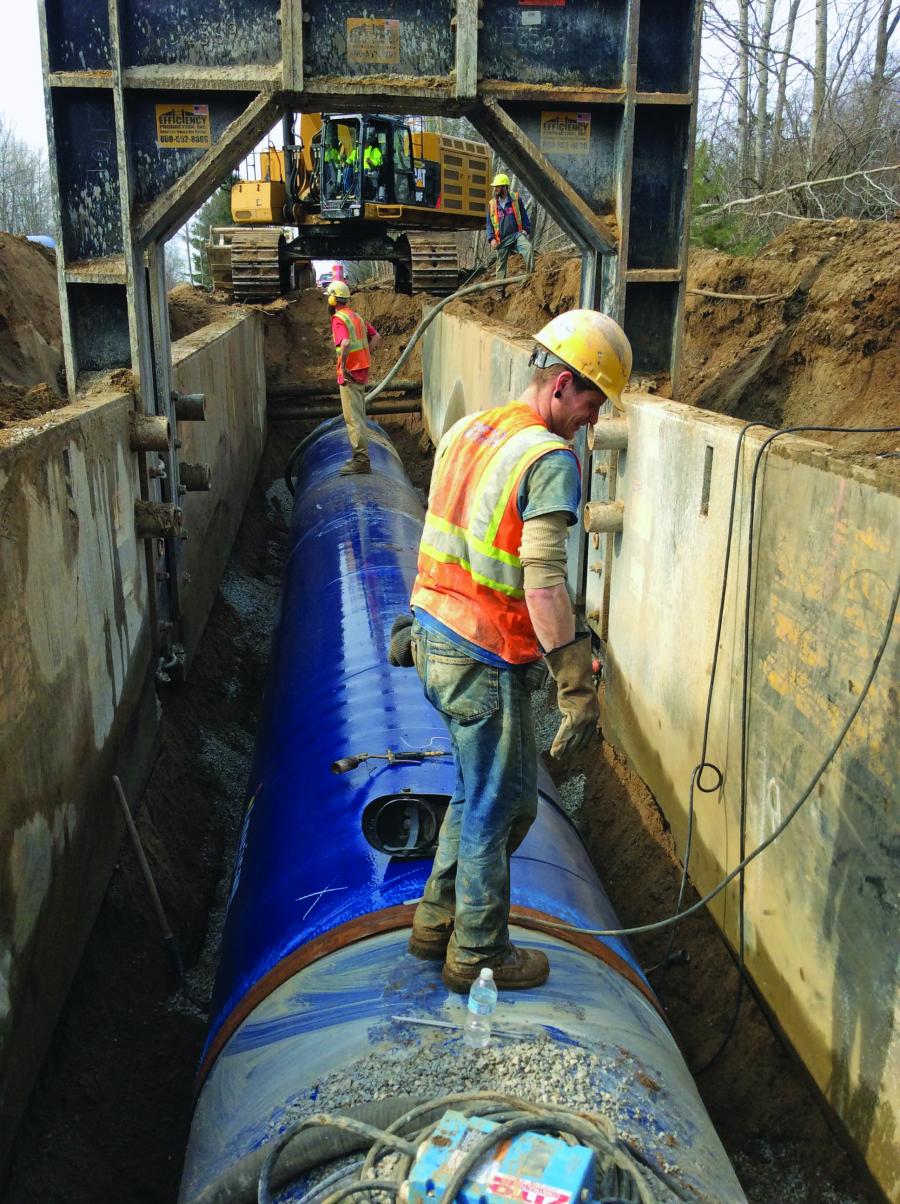 Work is continuing on the KWA pipeline, a multi-year water intake pipeline project that will bring raw water 75 mi. (120 km) from Lake Huron west along the I-69 corridor, including servicing the city of Flint.

In the wake of the Flint water crisis, a huge spotlight has been turned on infrastructure in American, and specifically, the country's miles-long network of aging underground water pipes. While there are new short term efforts to bring fresh water into Flint, plans have been in the works for several years that should provide a long-term solution.

In 2013, ground was broken on the Karegnondi Water Authority (KWA) pipeline, a multi-year water intake pipeline project that will bring raw water 75 mi. (120 km) from Lake Huron west along the I-69 corridor through Michigan's Sanilac, Lapeer, St. Clair and Genessee counties; including servicing the city of Flint.

The $285 million project—years in the making—has many parts: a new water intake facility which bores 6,000 ft. (1,828 m) into Lake Huron, two water treatment plants, plus three new pump stations. But even with all the peripheries, the KWA pipeline project is just that: a pipeline.

In 2013, Zito Construction, headquartered in Grand Blanc, Mich., was contracted by the KWA to install 36-in. (91 cm) diameter steel Class 150 pipe along an approximately 14-mi. (21 km) stretch of the main line from Genessee to Lapeer County. That completed in 2014, the Authority again awarded Zito an approximately $18 million contract to install 68,500 linear ft. (20,878 km) of much larger 60 in. (152 cm) diameter spiral weld steel transmission pipe across parts of Lapeer County.

Zito began the second portion of the pipeline in April 2015. With such a distance to cover, Zito is installing extremely long 50-ft. (15.2 m) joints of pipe. The more than 1,600 jumbo pieces of pipe are being placed in an open cut trench ranging from 5 to 25 ft. (1.5 to 7.6 m) deep. Because the trench is deeper than 5 ft. (1.5 m), a trench protection system is required. And therein lies the biggest challenge for the veteran underground utility contractor.

There are only so many ways to shore a trench and still be able to install pipe 50 feet long, with soil conditions typically being the primary factor driving the choice of trench protection system.

“Ground conditions along the pipeline can best be described as 'sandy to swampy,'” said Jeremy Drielick Sr. engineering technician of Rowe Professional Services Company, the engineering firm responsible for Zito's second portion of the KWA pipeline. “And that about covers it.”

“Because of the ground conditions, we knew we couldn't slope the trench and not take out the whole road in some places,” said John Zito, president of his namesake company. “If we could have sloped it we might have moved along faster, but sloping or some kind of shoring just wasn't economical,” he said. “We knew we were going to need a [trench] box. A very big trench box.”

Even with the trench protection system decided, Zito still faced many challenges. The question still remained, how do you install 50 foot sticks of pipe in a trench box? For help, Zito turned to the company's go-to source for underground safety-related equipment—Mid-Michigan-based Efficiency Production, the nation's leading manufacturer of trench shielding and shoring, according to the company.

“It's actually not as hard as you might think,” said Mike West, Efficiency Production's vice president of engineering. “We've built several custom trench shields in the past exactly for the same purpose, installing joints of pipe 50 feet or longer,” he said. “The key is designing a box with enough pipe clearance so the contractor can angle the pipe into the box and under spreader arches.”

Efficiency's solution is accomplished by using two trench shields with custom high-clearance arches instead of spreader pipe on the abutted ends of the boxes.

“The shields we built for Zito, however, are different in that the lead box is so much longer than the trailing box,” said West. “What you end up with is a lot of space to get the pipe into the front box and under the arches, and then just enough space in the second box to shield the connection work,” he said.

The result is a trench shield almost 60 ft. (18.2 m) long with more than 11 ft. (3.3 m) of pipe clearance; plenty of room for Zito's excavator operator and crew to angle the spigot end of the pipe into the connected boxes and up to the bell end of the installed pipe. The pipe is then tack-welded and heat shrink wrapped on the outside before a welding crew from Utah-based subcontractor National Welding traverses the inside of the pipeline to permanently weld all the joints from the inside.

Zito is anticipating being finished installing this section of the pipeline by June 2016.

Zito Employs Fleet of Heavy Equipment for the Project

To wrangle both the big pipe and the big combined trench box into and through the trench, Zito has a fleet of equipment on site, including:

• A couple of smaller trench boxes

The new KWA pipeline will supply treated and untreated water to the municipalities of the region, industrial customers, agribusinesses, rural agriculture developments and residential commercial light and heavy manufacturers. The boundaries of the water supply will encompass more than 2,400 sq. mi. (3,862 sq m) and over a half million people.