Contractor Installs More Than 800 Feet of Pipe on Project 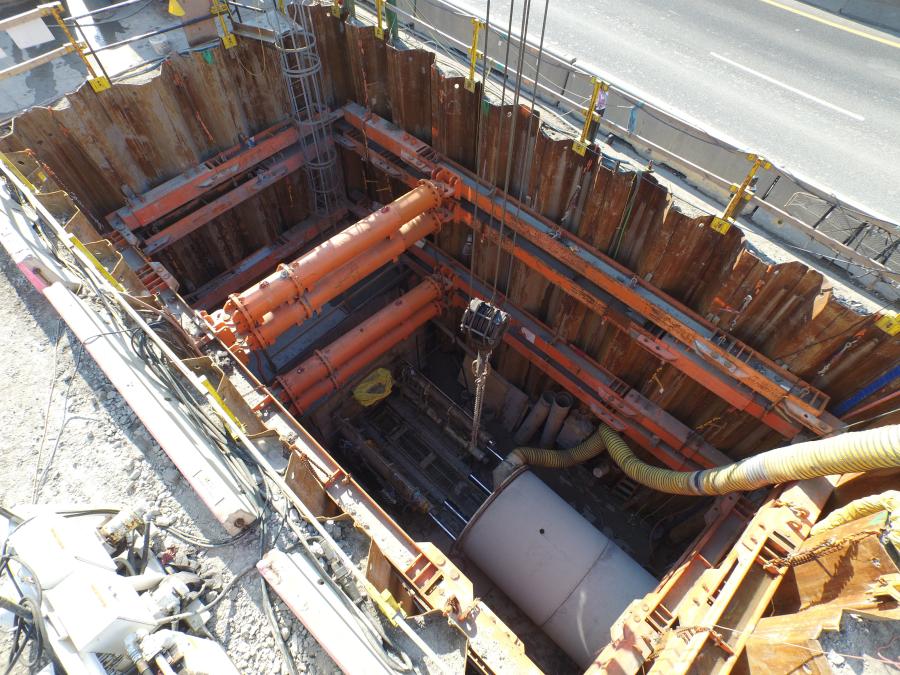 Eight hundred, ninety-five ft. (272 m). That was the distance Chicago based contractor James McHugh Construction Company had to install 84 in. (213 cm) reinforced concrete pipe (RCP) as part of the WB 290 Flyover Project (Contract 60W28). McHugh subcontracted Dynamicx Enterprises (Chicago, Ill.) to install the shoring, and tunneling contractor LJ Keefe Company (Mt. Prospect, Ill.) to do the pipe jacking/tunneling. Keefe planned to use a 102 in. (259 cm) diameter tunnel boring machine (TBM). This is simple enough on the surface, but below the surface is where things get interesting.

“For a project like this, normally we would quote a slide rail system,” said Bill Stanley, sales representative of Lee Jensen Sales, out of Crystal Lake and New Lenox, Ill. “We were within 5 ft. of active traffic on Westbound I-290 for both the receiving and jacking pits, as well as having a building 65 ft. from the receiving pit; we had to come up with something else. As we started digging into the parameters of the project, it was about as challenging as you'd see for an earth retention system: tight work spaces, deep cuts, poor soils, heavy surcharge loads and large clearances — horizontal and vertical — required.”

That nearby building proved to be a big area of concern for the whole project. Officials were concerned about building settlement, roadway and bridge support, as well as many active utilities in the area. As such, the requirement that any shoring used could deflect no more than 1 in. (2.5 cm).

“When Lee Jensen Sales contacted us about the project, my first thought was it could be done using Slide Rail,” said Joshua Thorne, Pro-Tec Equipment's Shoring manager, “but when the talk of no more than 1 inch deflection came up, I knew that could only be done by one thing: sheeting. For Pro-Tec Equipment, that meant the Pro-Brace.”

The Pro-Brace System is the only large sheeting and bracing system 100 percent designed and built in the United States. The system consists of enclosed hydraulic rams and static extensions, which can be stacked and staged on top of each other during initial installation to help speed up installation time.

At the time that Dynamicx contacted Lee Jensen Sales, Pro-Tec Equipment had a Pro-Brace project going on in Utica, Mich.

“We [Pro-Tec Equipment] invited Bill from Lee Jensen Sales and Alfonso from Dynamicx to visit the job site to see the system in action,” said Thorne.

That turned out to be the key.

“Seeing the system in action was nice,” said Alfonso Arrambide, project manager of Dynamicx, “but talking with the contractor is what really sold me. He told me the amount of time and labor they saved using this system.”

“At first, I had a bit of sticker shock when Bill gave me the quote for the system,” said Arrambide, “but the savings in terms of labor more than made up for it. We cut our labor by about half, compared to doing a traditional cut and weld, or beam and lag job.”

Starting the project in the middle of a cold Chicago winter was not ideal, but after a short adjustment period, both the Pro-Brace system and the installation crew found their stride. The excavation part of the project, was done by Dynamicx using a Link-Belt 460 and a Terex TC 50 mini-excavator to dig inside the system. The sheets (PZ-27) were installed by Michels Foundations (subcontracted by Dynamicx) using an ABI Mobilram 14-17V hammer.

“There were some initial hiccups with the project,” said Arrambide, “but the system overall worked better than I had expected.”

James McHugh Construction Company is a general contractor based in Chicago. For more information, visit www.mchughconstruction.com

Dynamicx Enterprises is a concrete and underground construction company based in Chicago. For more information on Dynamicx, call 708/929-4551.

Michels Foundations is a division of Michels Corporation, a utility contactor. For more information, visit www.michels.us

Lee Jensen Sales is the only authorized distributor of Pro-Tec Equipment in the Chicagoland area. Specializing in trench shoring and shielding equipment, material lifting, construction lasers, fall protection, competent person training and more, Lee Jensen Sales can be contacted at www.leejensensales.com or 815/459-0929.