The MC305 was once again, the right tool for the job at the stadium. 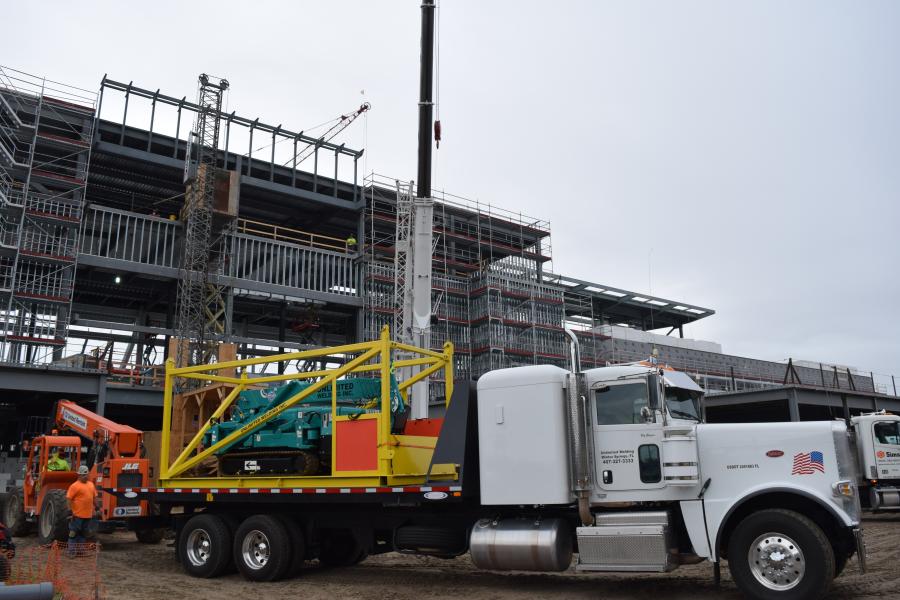 Custom steel fabricator and erector, Unlimited Welding Inc. purchased a new MC305CRME-2 mini-crane for the hoisting and installation of large stairwell sections in the new Orlando City Soccer Stadium currently under construction. They also will utilize it for other specialty steel structures and railings. The MC305 was tasked to operate in very confined workspaces within the upper deck areas.

To move the MC305 into position in the workspace was a task in itself. The contractor fabricated a custom designed platform for the MC305, so that it could be hoisted to the upper level of the stadium using a larger mobile crane from the ground.

Once at the work level, the MC305 was easily and safely transferred from the platform and into position to begin hoisting stairwell sections. Using the MC305, the contractor could then work independently on its part of the project, saving time and money, without relying on a large mobile crane from the ground.

Maeda USA assisted the contractor in advance, with ground pressure and outrigger force data so that the structural engineers could approve of the MC305 working on the stadium deck.

At a weight of 9,100 lbs. (4,128 kg), the MC305 is considerably lighter than other conventional cranes, such as a carry-deck style crane. The small size and “turn in place” maneuverability of the MC305 meant that setting up and traveling within the confines of stadium upper deck area was performed easily.

Utilizing a compact MC305 meant that a large, expensive mobile crane, operating from ground level, would not be needed for the contractor's installations.

Several features on the MC305 were essential to working on this unique project and handling the loads safely. Operating by remote control — which comes standard with all Maeda mini-cranes — the operator was able to watch and control the stairwell sections being hoisted, while looking down over the edge of the openings. This allowed precise placement of the loads, and greatly increased safety, by not having to operate in the blind over radios.

The Maeda OEM Moment Limiter Safety System and Display, with load charts programmed in, also aided the operator in making sure all loads were well within the MC305's capacity. This operator aid, in conjunction with Maeda's integral Outrigger Interlock Safety System, and Anti-2-Block device, make Maeda mini-cranes the safest and most advanced mini-cranes on the market today.

The MC305 was once again, the right tool for the job at the stadium.