Contractor Strikes Out on His Own After Years in Industry 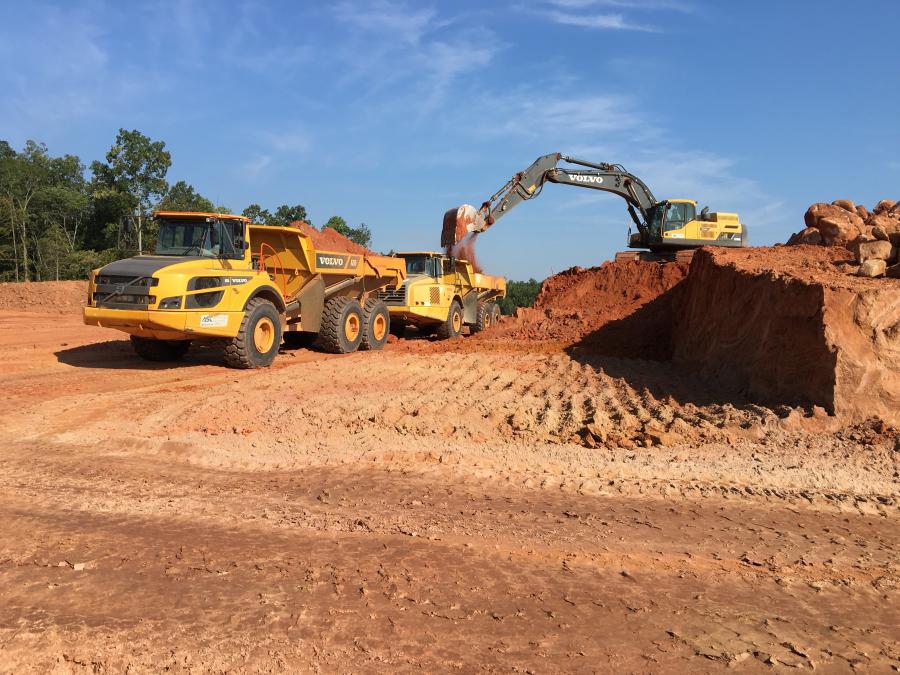 Dan Purcell, owner of Purcell Construction, Fort Mill, S.C., was raised in the construction trade. His father, a Vulcan Materials Company salesman for 25 years, used to take him to job sites, leading to his interest in civil engineering.

After graduating with a degree in civil engineering from the University of Tennessee, Purcell went to work for Marvin Borum, in Greensboro, N.C.

“Mr. Borum's MO was to hire young engineers out of college and give them on the job training required in order to get a PE License. For that you need to work for five years under a licensed engineer, so I started that process. First you have to take the EIT [Engineering in Training] test and work five years under a PE and then pass another test,” said Purcell

During this time, Purcell drew sub-divisions and shopping centers and did civil engineering design work in the Greensboro, N.C., area.

“This was back before computers so I literally drew everything needed for the plans. Approximately four years into this process I came back into the office one day from being out in the field checking on projects and Mr. Borum said 'Dan you love to draw it then go out and build it, but the company needs you to spend more time drawing.' Me I just wanted to build things,” said Purcell.

With that background Purcell eventually went to work for APAC, a highway construction division of Ashland Oil Company, and worked there for 10 years on highway and private projects, along with estimating and project management.

“They moved me around to several divisions; I was in Winston-Salem, Greensboro, Ashville and then they moved me to Charlotte, that's how I got to here and I quickly realized this was a booming area,” said Purcell.

Out on His Own

In 2001, Purcell Construction was formed and its first projects were a triple barrel culvert at Deerfield Creek Subdivision for John Wieland Homes and a call center building up at the Research Park off W. T. Harris Blvd., in Charlotte.

“I did the call center job for a general contractor friend of mine who called and said we are going to go look at this job which turned out to be this 400 car parking lot, I mean it was a huge job. At the time I had a car that I was borrowing from a friend and one employee who was working for no pay. We didn't have any equipment so we decided to subcontract out that job completely and use that revenue to start hiring some employs and getting some equipment,” said Purcell.

“Same with the culvert, we had to sub out all of the major items to people we trusted to make sure the project was successful for the customer so we could develop our reputation, and use that to continue growing our company. I mean I went in there at mid-night every night for three months and put gas in the pump, so that it would pump the creek down. The idea of private ownership, get up…go put gas in the pump. We finished the culvert and by the time the actual subdivision beyond the culvert was permitted we had our own equipment, and crews, so we did the work ourselves and never looked back”

“Being so involved in subdivision work really hit us hard starting in 2008 when the housing boom crashed.”

Purcell credits the willingness of the employees to do odd jobs and be on different size crews as key to the company's survival through hard times. Purcell Construction's largest customer at that time was John Wieland Homes.

“The local division of John Wieland Homes had been great to us for many years and we had a great relationship with them,” said Purcell.

“We did all their self-developed work, turn-key, and so as they started back up, we just sort of picked up where we left off with them, which was a huge blessing.”

Also during the down turn developers and third party companies were needed to take a piece of property that was now owned by a bank and which was partially finished and get it accepted so that the bank could sell the lots.

“We had a pretty good reputation that we could do that work. We would deal with the local municipality, our guys understood what it took to get something tested and accepted by the municipality. So we did that work for a couple different developers and that helped keep us going.”

Purcell also prefers to purchase equipment, rather than leasing or renting.

“I am just old-fashioned. I still buy my equipment. I don't lease, or rent, many pieces of equipment so over time I didn't have any payments. The only time my equipment cost me money, was if I ran it. So we were able to stomach the loss of revenue by the fact that we didn't have to have the payments and all that going on. If we found a job, we just went and got a piece of equipment we had stored on the sub-division somewhere; we literally had our equipment tucked away in sub-divisions that had been stopped and we just left the equipment there because we didn't have anywhere to put it. Obviously, you can't take it home with you,” said Purcell.

“Some of the things they were trying to finish in the sub-divisions were the amenity areas: pools and tennis courts, along with small portions of unfinished lots. The roads were there and the lots were almost ready but the bank couldn't turn them over to a builder because they hadn't finished something, so we'd move in. One problem was you didn't always need two 80,000 pound excavators and off-road trucks to grade small areas. Sometimes you need a small excavator, or maybe skid steer loader, to work on finishing tasks. Also, you don't need large excavators to install small sections of pipe, or correct something without making a large mess.

“As we were doing the smaller jobs we also didn't have anything we could move ourselves and so talking to Mark Arcilesi, ASC Equipment salesman, we began looking at some of the EC140 and EC160 size machines [15,000 to 30,000 pounds]. Since we have dump trucks, and tag along trailers which do not need a permit to haul this size load, we would pick them up with your dump truck and mobilize ourselves. We had never bought anything that size so Mark was a big help in that.”

According to Purcell, the company is still doing mostly sub-division work.

“I would say we do 80 percent sub-division site work right now. We are doing two good size commercial jobs and we did more commercial work during the down turn. We started re-acquainting ourselves with some building contractors we had known before but we kind of drifted away from because we got busy in sub-division work.

“Recovering from the downturn they would have a little job here and there, so that's what I mean by our guys that were used to laying pipe would go out and grade a parking lot then put in some storm drainage and other site work aspects…we were sort of multi-tasking. So thankfully the employees were willing to do that.”

“From that experience I guess to where we are now is that we are doing some in-house grading but we're way bigger in pipe work which fits our business model.”

“We would love to just lay pipe but you just can't anymore. With the new environment, banks, developers, they want someone to take care of everything.”

Purcell's most recent project is the Overlook at Barber Rock, in Lancaster County, S.C.

“There's about a 30 foot cut up there where the excavator is sitting, so we've got 30 feet about probably say 100 feet wide and 30 feet down. That whole area is going to be down lower then it is now,” said Purcell.

Purcell estimates that there will be approximately 200,000 yards of fill that the company will need to fill in.

“Most of the fill is right in here. The cut from up there pretty much comes down here…this will be 6 feet or 8 feet higher than the road when we leave…there will be a berm here…a landscape berm.”

After all the grading work there will be approximately 12,000 linear ft. (3,657 m) of various size pipe infrastructure to be installed by Purcell's crews.

Purcell also is using an A25C articulated truck on a sewer outfall, which is something that goes through the woods where it isn't developed and is usually wet, muddy and narrow.

“You may only have 30 feet to work in. Your materials are all the way at one end and you can't just drive in from everywhere. You have to load up and head down to where you are laying pipe. Jim McCarty [Purcell vice president of operations] came up with the idea several years ago, let's get an off-road truck and we'll haul stuff down and then haul stuff out. And, being able to traverse wet, nasty conditions came in handy,” said Purcell.

“We bought it, ran it and it was fast, it burned way less fuel in a day. When I say fast, I had to learn what they meant. Our operators meant that it was responsive, when you hit the lever there was no stall…it turned, it dug, it did whatever…so it won hands down. We'd never even seen a Volvo before that time.”

Twelve years later the excavator is still in use by Purcell.

Purcell also has Volvo articulated trucks, including an 825E and D and several older models and recently purchased an EC350 EL excavator.

“The thing [the operators] like the most about both of the last two Volvos we bought is they like the cab, they like the way the cab works, and they like the smoothness of the operation. and the regeneration, they call it…or the diesel particulate overheat has gotten a lot better,” said Purcell.

“In both the last truck, and the last excavator, those are Tier IV engines and that's gotten a lot smoother. Also, I think they like the cab, the operator's area, they like the display and visibility. The EC350 has a lot of power and it's responsive. In fact, we've had jobs where we've had the Volvo excavator and other excavators on the same job and if one or two of them were not necessarily needed, they'll grab the Volvo.”

“The service at first was kind of a learning curve for them and for us. We had to learn to give them more information about the equipment since we were new to it. At the time we had a third party that was doing our field servicing so possibly some of the information was getting lost in the process, but now ASC is providing those services as needed. I think over the last couple of years they have increased their fleet and improved communication within the branch.

“To keep the machines operating properly we have a third party do the PMs [preventative maintenance] directly for us. We do those every 250 hours therefore we have all of the component wear and fluids sampling data readily available for each machine. We can review this history with the ASC staff to coordinate timely replacement and repairs more efficiently.” CEG