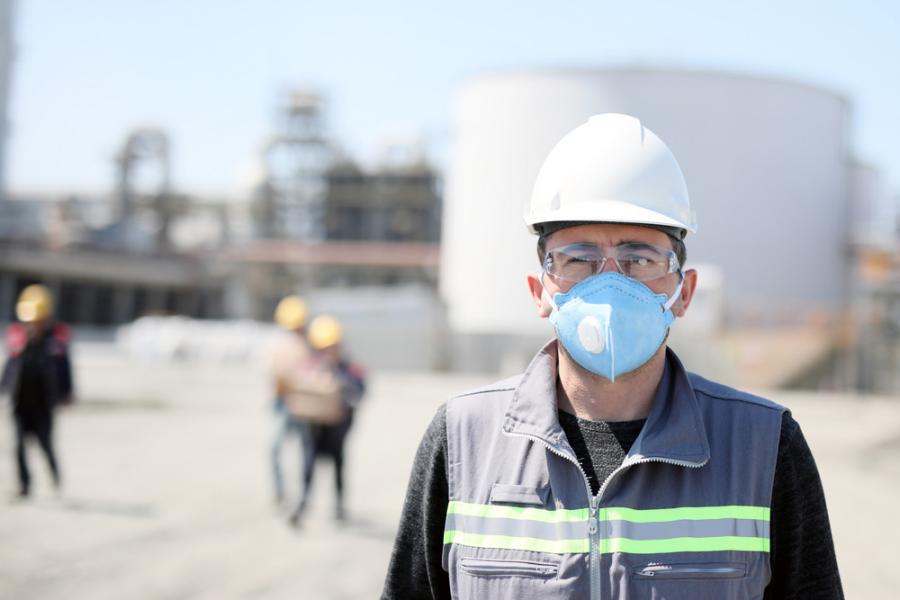 About two weeks ago, Larry Gescher, a co-owner and the president of H.P. Civil Inc. (Stayton, Ore.) said, "Things are a little crazy trying to get new procedures in place to keep our guys working while the protocols are still changing. As an industry, we take the safety of our employees very serious and COVID-19 is no exception. We understand that there are a lot of people not currently working as a result of the Governor's Executive Order. As a result, we know that we have a lot of eyes on us making sure that we are practicing the best protocols available. Besides the extra hand washing, wiping surfaces and tools down, we now require safety glasses and gloves at all times."

About 1,200 people across the state have called the police since the governor issued an executive order in late March, which required all non-essential business operations to be shut down.

"When that happened, people saw construction workers that were not six feet apart and they called the police and then state officials went to the media to inform people not call 911 if they see this," said Gescher. "This has been a moving target and there's so much information out there. Construction is considered essential in Oregon and we're still working. The way the order was written, it was six feet from any person, to the greatest extent possible. In our line of work there are things that we have to do physically where our people have to be closer. Initially, the recommendation was wearing safety glasses and gloves at all times and wiping everything down. We did that and then wearing masks was required and we distributed cloth masks, made by one of supervisor's wives, to our employees on April 8.

"Anytime someone had to work closer than six feet apart, they wore the cloth masks," he added. "We now have face shields on all of our projects as well. Since we have a lot of our employees working away from home, we put them all up in single hotel rooms. We also eliminated all ride sharing."

The homemade, double-line cloth masks in which a filter can be placed inside are being used as the state is asking that all medical-grade masks be reserved for use by doctors, nurses, staff associated with hospitals, clinics and other facilities. All industries were asked to turn in its masks to help out our front-line medical personnel.

Staying Safe at the Job Site

H.P. Civil has an ODOT project where it needs to set up a 7-mi. lane closure on Interstate 84.

"We can have our crew show up in their personal vehicles at the start of the lane closure where we can get them off the highway in a safety location," said Gescher. "The problem arises when they get to the other end of the lane closure and need a ride back to their personal vehicle. We put together a process that if the guys are in a crew cab, that one person would be in the front and the other in the back on the opposite side. This could be a problem because you're not going to have 10 trucks there. We're trying to figure this out."

One possible solution is to have people, who are wearing safety harnesses, travel in the back of the truck, but the problem is that they would be traveling in live traffic.

"It comes down to which alternative is safer," said Gescher. "We're talking to other contractors doing similar work and they're opting for the back of the truck. Everybody has their own interpretations of what you should be doing."

Many of the calls to the police are based on motorists seeing construction crews in trucks, and part of this is due to increased construction activity as the weather warms up. Standard night-time lane closures are being extended on a job-by-job basis as a result of less traffic on the highways.

ODOT has not shut down any of H.P. Civil's projects and, at this point, Gescher has 36 employees on seven job sites.

"We're taking all the precautions and we're putting all the best practices into place that we can — the safety of crews and their families is paramount," he said. "We've got two people at home who were told to say in quarantine until they can get a doctor's release to come back. We can't chance anything. Everybody is trying to do their job and we all have to be understanding as the virus makes everyone a moving target."

As of April 9, the order was issued for people to wear plastic face shields and the company has ordered 100 of them.

"Everything is on backorder and the biggest problem is trying to find everything we'd like to have to implement best practices," said Gescher, "and until then, you have to improvise and come up with the next best things to keep on going."

Gescher praised the efforts of the Oregon Association of General Contractors, which immediately acted when the COVID-19 situation arouse.

"They were aggressive in pulling together best practices for us to go by," he said. "I'm probably spending a good 80 percent of my time chasing COVID-19 stuff, trying to keep up and ahead of it. It's really time-consuming with the changing guidelines, You can go through the CDC, but it's not specific to our industry. You can rely on the AGC and they're sending us constant updates. On April 9, the AGC of America held a national stand down and we participated with all our projects.

"They also provided a pile of information that we could take to our employees and walk them through it, which could be shared with their families," he said.

Jarod Cheney, the president and CEO of Massana Construction Inc., which operates in Georgia and the southeast, Texas and Washington State, pointed out that the Washington Department of Transportation has declared which projects are essential and non-essential. The firm is waiting for the update on whether some projects can be re-opened.

"Some of my guys were temporarily laid off," he said, stressing how closures can impact schedules, work and supply chains. ‘In Texas, we're good and able to continue working as long as we follow the COVID procedures laid out by the American Road & Transportation Builders Association (ARTBA), which has done a pretty good job to help with the layout of guidelines."

"You have to check temperatures and if they're feeling sick, they're sent home immediately," said Cheney. "The measures are the same for Georgia, where we continue to work. We have some guys that have been exposed to COVID-19 and we have some older guys in Georgia that were sent home to quarantine because they were at high risk of getting infected."

Cheney praised the ongoing efforts of the Georgia Highway Contractor Association that is working with GDOT to develop regulations and guidelines for construction crews, and sending that information to general contractors and subcontractors.

‘This situation is unprecedented and our guys are taking the situation seriously," he said. "At the beginning, everybody didn't realize how big of an issue this was, but as time went on, they realized how it affected everything. We implemented raises earlier than we usually do and the guys are happy to just being able to work — they know a bunch of people that are not able to work.

"Our industry is important," he added. "The government has acknowledged that and kept us deemed essential and working. They've done a good job of giving us guidelines to go by."

J.R. Vinagro Corporation, which operates in Mass., R.I., N.J., N.Y., Conn. and Maine, has not experienced the public calling authorities about its crews working.

"It's just the complications of having guys working so close to each other and trying to maintain what the CDC is requesting us to do," said Jeremy Souza, J.R. Vinagro Corporation's operations manager, Heavy Civil Division. "We have facemasks along with respirators and gloves are mandatory on the job site. If our guys have to work less than six feet from each other, we require them to wear face masks and respirators. Right now, we only allow one operator to run each piece of equipment in an eight-hour shift, and they have been requested to wipe down their machines throughout the day and to do a mandatory thorough cleaning at the end of the shift."

MassDOT has not shut down any of the corporation's work sites and has approved requests, due to lower volumes of traffic, to shut down lanes during the weekdays to expand operations.

The Governor of Massachusetts's office, explained Souza, is being proactive and construction firms participate in a stand down to address the COVID-19 situation and has requested that all construction workers sign a daily form describing their medical conditions and certifying that they are fit to work.

"If they show up with a fever, they are asked to leave the job site and go into quarantine for two weeks," said Souza. "They can return if they have a medical clearance. The joint-venture that we're working for at the Chelsea Viaduct project has someone doing random temperature checks throughout the day. So far we haven't had to send anybody home."

Like other New England contractors, the virus outbreak is affecting the efficiency and cost of J.R. Vinagro operations.

"The guys in the field are concerned about the possibility of not working tomorrow and having to collect unemployment," said Souza. "There's a lot of uncertainty of what's to come and we're all kind of in the dark. Some of the other construction companies have had their projects shut down because they were declared non-essential.

"One company working in Boston had to layoff almost 400 workers on one shift overnight — operators, carpenters, and laborers," he added. "They think there is no even precedent on who is essential and who's not. There have been jobs that have been shut down that would be considered more essential because they are in a location in Boston, which is considered to be a virus hot spot."

Because J.R. Vinagro engages in demolition, its work sites are often isolated and currently it has nearly 350 people working at several dozen project sites.

To further ensure the safety and health of its workers, it has purchased several dozen hand washing stations that have been placed at job sites.

"We also have an extensive inventory of hazmat suits and a huge selection of different facemasks between regular shields to goggles," said Souza. "Our safety department has gone above and beyond in procurements, having a bit of everything to make sure the guys feel comfortable to go into the field and be protected from the virus."

Souza spoke for all concerned in the construction industry when he succinctly stated, "I'm ready for the world to go back to normal." CEG