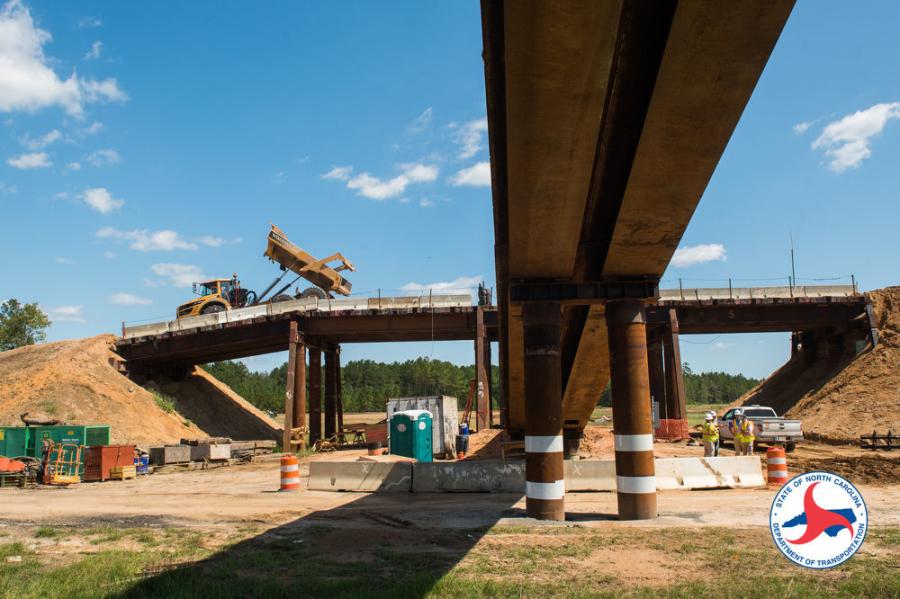 An innovative effort in delivering this phase of the Fayetteville Outer Loop project is the use of a conveyor belt system to efficiently transport fill material.

The joint-venture, which secured the contract in November 2017, is designing and building Section A — 5.7 mi., Camden Road to Interstate 95 near the Robeson-Cumberland county line. Taking place in both counties, construction is scheduled to wrap in the summer of 2022. 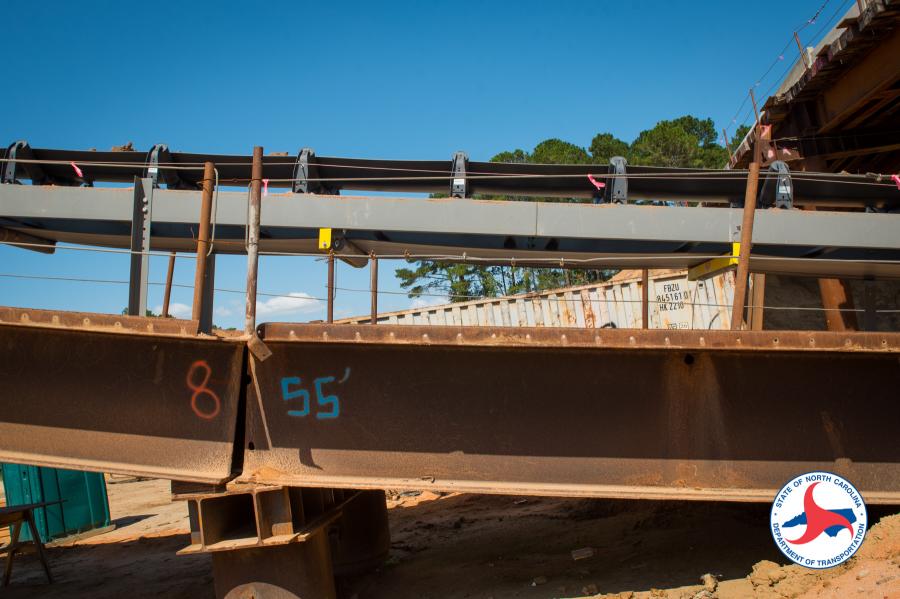 "The new highway will improve travel and safety in the region, increase economic opportunities, enhance freight movement and take traffic off locally congested roads," said Andrew Barksdale, an NCDOT public relations officer. "It also better connects our rural and urban areas and employment centers, giving Fort Bragg better interstate access to help fulfill its critical missions. We plan to have the entire outer loop, all 39 miles, opened to traffic by 2024."

Fayetteville, the state's sixth-largest city, is a growing community and commercial/industrial center. When complete, the new highway will be known as Interstate 295. About half the loop is open to traffic. The project is being funded by the National Highway Performance Program.

This section of the divided interstate-style highway will have two lanes in each direction; 14 bridges; three interchanges — at I-95, at Parkton Road and at Black Ridge Road, which will connect to Old Plank Road; and six roundabouts at the on/off ramps to replace traditional intersections with stop signs.

"The interchanges for this section are in rural areas, so traffic volumes are lower," Barksdale said. "Roundabouts are a great alternative to traditional intersections with stop signs. They improve safety because you must slow down to enter them, and they eliminate the stop-and nature of a conventional intersection."

The only underground infrastructure being installed are waterlines for the Robeson County government and the Fayetteville Public Works Commission. There will be an interchange at Camden Road, but it will be built as part of the last segment to be awarded in July 2020.

The J-V's section's infrastructure is being designed by STV.

The construction is taking place on undeveloped property, and because this segment of the highway will not be open to traffic until this entire segment is completed, traffic impacts are minimal.

"However, the contractor must close the West Green Springs Road bridge over I-95 to make room for the construction of the I-95 and future I-295 interchange at this same location," Barksdale said. "We will close the bridge for about a year in early 2020."

The J-V has made a good start. 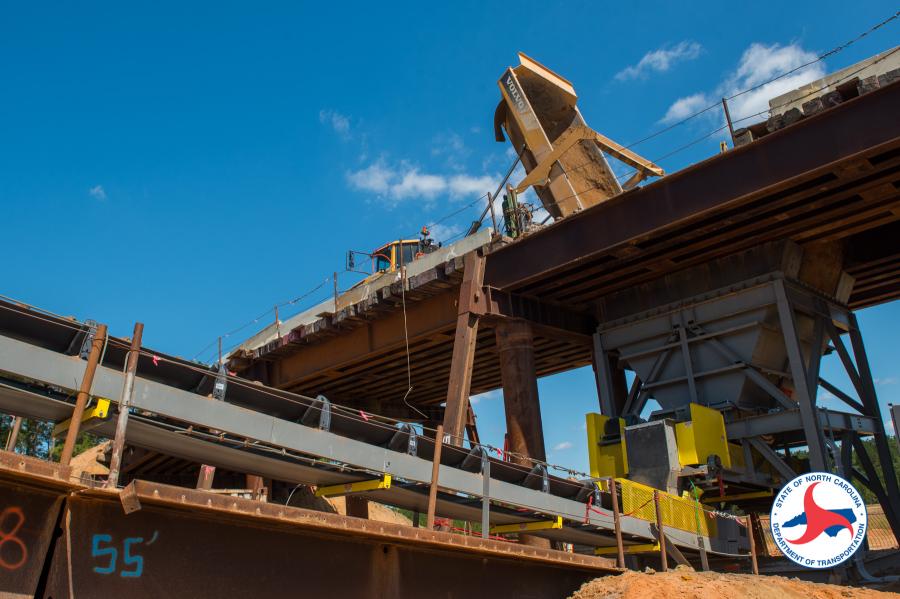 "We're working steadily from I-95, and we've constructed the end bents and central bents [of the bridges] for both ramps crossing I-95," explained Keith Nixon, Balfour Beatty's operations manager — special projects. "We're well under way hauling and placing dirt for structures. Next year is going to be wide open. We have two borrow sources on either side of the project. We plan to have six structures, mainly bridges, done in 2020 and to commence major improvements on I-95, including resurfacing."

Right-of-way (ROW) is a challenge for the project, as is the heavy traffic along I-95 and the impact of the hurricanes in 2018 and 2019, which flooded large areas of the job site. According to Nixon, the good news with the ROW is that all the acquisition should be done by end of 2019.

"That will open up the whole project," Nixon said. "We're not working 24/7 yet, but the conveyor belt system has been working at night and stockpiling dirt to be placed during the day. Relations with NCDOT and the U.S. Army Corps of Engineers are solid, and everyone has been engaged. It's a very proactive working relationship."

The earth work is pressing forward.

"Sometimes the material from our primary borrow sources can be wet and there's multiple clay layers," stated BBI's Jason Schuster, a co-project manager. "But right now, it's moving a little bit better than we planned and going as we expected. It's possible that the borrow source on the west end can be used on the next section of the Outer Loop."

Shonn Wallace of BC, another co-project manager, pointed out that equipment with GPS systems helps to attain specifications for the roads.

"We're working two locations, and we have multiple crews," Wallace said. "We're now deploying more crews, and the L line — which is main link of the project — will have several. On the Y line, once they get access, a lot of culverts will be under construction. Mountain Creek, a major subcontractor, is doing culvert construction right now, and we also started to bring up MSE walls."

Construction of the new roads has not begun yet, but the plan is to start from the middle and work towards each end. Once grading is completed, 8 in. of stone and subbase will be laid and covered by 8.5 in. of asphalt. When operations to set the girders over I-95 for the I-295 interchange begin, there will be temporary closures of I-95 on weekend evenings for safety. 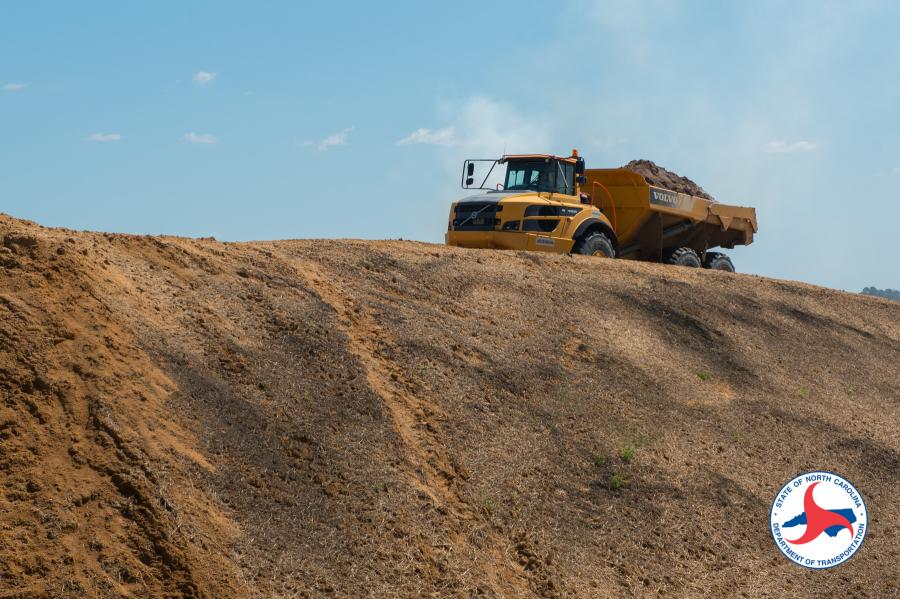 "Because we have to use large dump trucks to haul dirt over U.S. 301, we will be setting up a temporary traffic signal to allow the dump trucks to safely enter and cross the highway to the work site," Barksdale said.

The interchange work will start in 2020 and rapidly expand when the ROW restrictions are removed.

We've got full access to U.S. 301, and we've only just got access to the Parkton and Lake Upchurch Road/Black Bridge section," Nixon said. "We're progressing from I-95 up to the CSX railroad, which bisects the project. We want to get to the other half from CSX to Waldos Beach Road and finish the job as soon as possible. For the interchanges, it's bringing in the fills, building up the walls, getting the settlement periods over with, building the bridges and completing the roadway."

"The biggest challenges are the geotechnical conditions and the piles," Nixon revealed. "Sometimes the piles are running long. They're pretty much H piles, and we're trying circular ones to get better skin friction and accelerate the schedule."

Four of the roundabouts will be built at new locations away from traffic, and the other two (Parkton Road/N.C. 71 and N.C. 71/U.S. 301) will be constructed around traffic.

"Once the grading and roadway work is done, it's not a huge effort to build them," Nixon said.

An innovative aspect of the work is the conveyor belt system which transports fill around the bridges and ramps to elevate the ground where the Outer Loop's travel lanes will be built for the interchange at I-95. The conveyor operates 20 hours a day, and each day just more than 4,000 yds. (350 yds. per hour) of dirt is scooped up and carried on the belt. Last August, the J-V completed the installation of a temporary bridge for the conveyor, which is quickening the construction, reducing the cost and making it safer for motorists.

"This conveyor system makes the construction more efficient," said Joe Bailey, an NCDOT project engineer. "The contractor team actually came up with this idea during the design process."

This innovation will divert the equivalent of 109,000 dump trucks that would have traveled over public roads. The dirt is being hauled from a privately owned borrow pit. 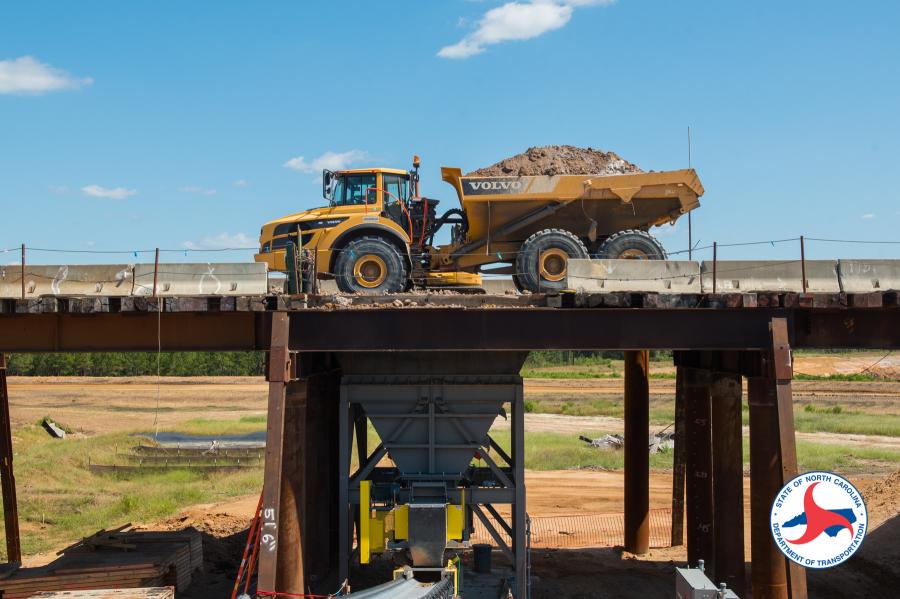 "The concept is not unprecedented in North Carolina," Bailey explained. "Contractors have used a similar set-up to haul borrow material over major routes in Wilmington and Raleigh for other highway projects."

Concrete Systems supplied most of the conveyor system components, which was chosen because spare belts, rollers and replacement parts can be purchased off-theshelf and stockpiled on site. The conveyor belt will be dismantled 18 months from now.

The project will require more than 3 million cu. yds. of borrow (dirt), 250,000 tons of asphalt, 280,000 tons of stone base and a large amount of concrete, which will be used for the bridges.

Peak days have 60 plus J-V and subcontractor employees on site, including those from Mountain Creek for culvert construction, National Erectors for iron work, Tricor for MSE wall construction, Simmons and Simmons for clearing, Razorback for boring, Curtin Trucking for barrier wall, Vistabution for demolition, Seal Brothers for erosion control and Lineberry for seeding.

The J-V owns the Link-Belt and Grove cranes, John Deere dozers, Cat and Bomag rollers, Cat excavator and a Cat motorgrader that are all on site. Other equipment is being rented, which includes Kobelco cranes; Cat, Volvo and John Deere off-road trucks; and Cat, John Deere, Komatsu and Volvo excavators. Many off-road trucks are being used.

The J-V purchases, rents and leases equipment from regional and local dealerships. According to Nixon, the partnership is fully integrated down to the crews from BBI and BC. "This is unique and there is a positive and good working relationship," he said. "If there is a problem, it can be fixed within 24 hours."

"The dealers have been very responsive in meeting our equipment needs," Schuster stated. "There is constant communication not only on what our equipment needs are from day to day, but also in making sure the dirt spreads keep running. If one piece of equipment goes down it can affect the entire operation, so responding quickly and getting is back running is crucial." CEG

New $242M Headquarters for Urban League Being Built in Harlem