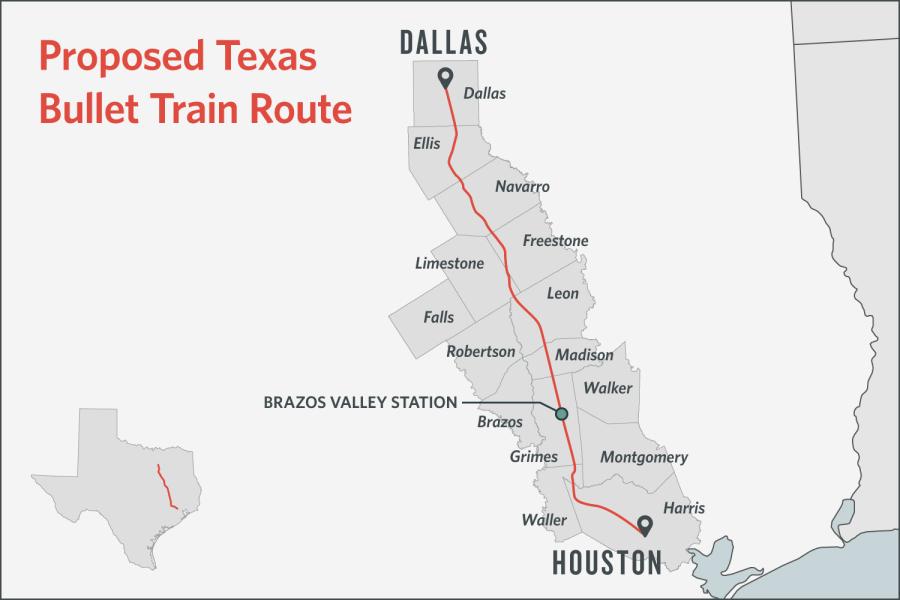 Texas Central is undertaking the development, design, construction, finance and operation of the high-speed train line that will connect North Texas and Greater Houston in less than 90 minutes.

The Thirteenth Court of Appeals of Texas ruled in favor of Texas Central, holding that it was both a railroad company and interurban electric railway.

The Memorandum Opinion, authored by Justice Nora Longoria, held "Having found that the appellants (Texas Central Railroad and Infrastructure, Inc. and Integrated Texas Logistics, Inc.) are both railroad companies and interurban electric railways, we conclude that the trial court erred by granting Miles' motion for summary judgment and denying appellants' motion for partial summary judgment."

Texas Central is undertaking the development, design, construction, finance and operation of the innovative new high-speed passenger train line that will connect the fourth and fifth largest economies in the country, North Texas and Greater Houston, in less than 90 minutes, with one stop in the Brazos Valley.

This decision comes after a four-year long court battle waged by landowners along the proposed route in Leon County, Texas. The landowners argued that the Texas Central project was not a railroad and therefore did not have the rights associated with a railroad, including eminent domain and access to property for surveyors.

"This decision is rooted in state law that allows survey access and use of eminent domain by railroads, pipelines, electrical lines and other industries that provide for the public good and a strong economy," said Carlos Aguilar, CEO of Texas Central. "This decision confirms our status as an operating railroad and allows us to continue moving forward with our permitting process and all of our other design, engineering and land acquisition efforts."

In 2019, Texas Central completed a portion of the land surveys required by the federal agencies conducting an environmental review of the project. This information allowed Texas Central to plan a route that is efficient, considerate of the environment through Central Texas and impacts the fewest property owners. The Final Environmental Impact Statement on the project is scheduled to be published by the Federal Railroad Administration later this month.

"Texas Central confirms that it will always respect Texas landowners' rights and will follow due process. Texas Central wishes to express gratitude to the Thirteenth Court of Appeals for its time in considering Texas Central's appeal," said Aguilar.

"Today's ruling supports the enormous amount of work Texas Central has done to date," added Aguilar. "Texas has the capacity, drive and population growth needed to make the Texas High-Speed Train successful and it's that momentum that is pushing the nation's first high-speed train forward."

Even though Texas Central officials expect to receive federal approval this summer for construction of its Dallas-to-Houston bullet train proposal, the project's timeline could be affected by the COVID-19 pandemic, company officials announced .

News of the anticipated approval; however, was met with displeasure. After an examination of the planned high-speed rail, 30 elected officials in Texas told federal regulators the project should be halted as the country addresses the new coronavirus pandemic and the company rethinks its financial shape.

In two separate letters to U.S. Transportation Secretary Elaine Chao, state lawmakers and two members of Congress said work by the Federal Railroad Administration on the Texas Central Railway project — which has faced stiff opposition for six years even as Dallas and Houston officials showed support — should stop entirely.

Texas Central, however, is ready to begin the first phase of construction of its privately funded and operated high-speed rail line once global financial markets stabilize and the federal process is completed. Many of its project partners are based in Europe and Japan, Texas Central Chief Executive Officer Carlos Aguilar said in a press release.

"Our engineering partner is in Italy, our operations partner is in Spain and our technology provider is in Japan," said Aguilar. "Our financial partners are in those countries, as well as here in the United States. Understanding the impact of COVID-19, and the challenges those countries are the U.S. are facing, is a new fact of life. We are already implementing work from home and other measures to deal with the crisis, but still do not know what other impacts this will have."

The company's next immediate step is to continue working with its partner organizations and federal and state agencies, led by the Federal Railroad Administration, to finalize permits, Aguilar said. Based on the company's current schedule from the federal government, Texas Central officials expect that approval to occur by July 31, he said.

"From an execution standpoint, the project is shovel-ready," Aguilar said. "Once we receive our permit approval, our ability to begin construction will be contingent upon financial entities in the United States, Europe and Japan, all of which are dealing with urgent priorities generated by COVID-19, completing their due diligence process."

Texas Central has a contract with WeBuild (formerly Salini-Impreglio joint venture) and its U.S. subsidiary Lane Construction Co. for the design and construction of the bullet train. The train will be based on Central Japan Railway's Tokaido Shinkansen technology in Japan.