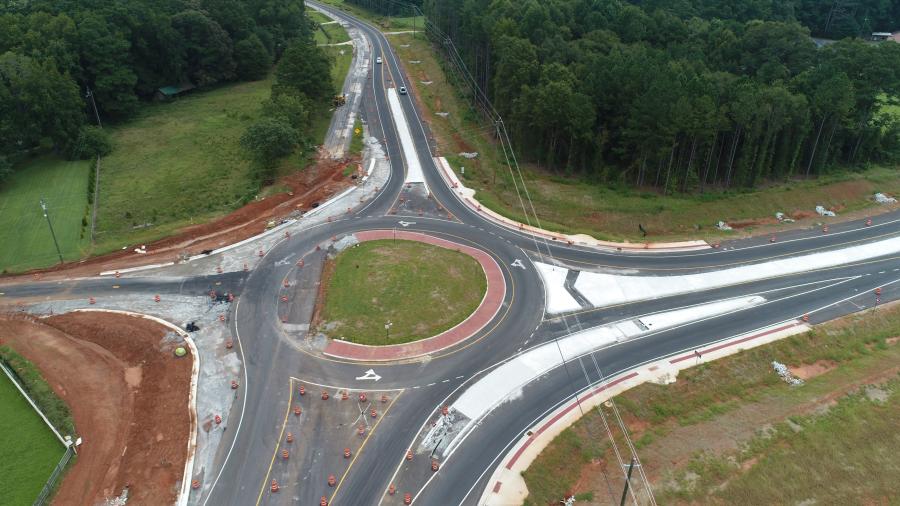 A multilane roundabout is being constructed at the intersection of Georgia SR 12 and SR 142.

E.R. Snell Contractor Inc. is on schedule and on budget in the construction of the Georgia Department of Transportation's (GDOT) $19.3 million project to reconstruct and widen a 3.5-mi. section of State Route 12/U.S. 278 from the city of Covington limits to east of SR 142.

The Newton County project, which began in March 2017, is nearly 40 percent complete and has a contract completion date in May 2020.

The project involves widening and reconstructing SR 12 from west of Henderson Drive to just beyond the SR 142 intersection. The route will consist of two 12-ft. lanes in each direction separated by a 24-ft. raised, grass median, with 10-ft. rural shoulders, 6.5 ft. of which will be paved. Also included is a multilane roundabout at the intersection of SR 12 and SR 142, the replacement of two bridges, construction of an interchange where two highways connect, and the installation of a traffic signal at the intersection of SR 12 and Elks Club Road.

The project has been planned since the early 2000s, and state and federal funding is covering the cost of the initiative from right of way to engineering and construction. ROW acquisition began in 2014 and exceeded $2 million.

SR 12/U.S. 278 is industrial and commercial toward the Covington (western end) of the project, but then begins changing to rural and residential as it approaches SR 142. 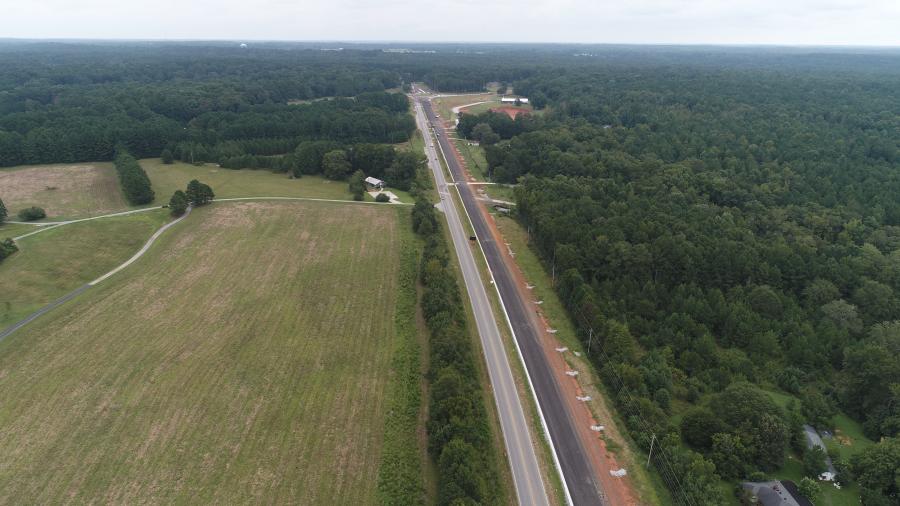 “The goal of this project is to combat the potential growth of the area, which is based on the heavy truck use supporting several plant facilities,” said GDOT project manager Gregory L. Bailey. “With the potential expansion of these businesses, as well as population growth, it was necessary to widen this road to meet those needs.”

Prior to the construction, 2016 daily traffic counts along SR 12 varied from 13,500 to more than 18,000 vehicles a day. The new infrastructure, designed by GDOT, will meet traffic demands for several decades.

A unique safety feature of the project is the multilane roundabout design on the eastern end.

The report also noted that widening SR 12/U.S. 278 will improve the projected level of service, reducing congestion and driver discomfort, as well as addressing concerns about safety raised by accident statistics for SR 12 from SR 142 to the Alcovy River.

“The accident rates along this section of SR 12 are extremely high for a rural minor arterial,” it stated.

The two bridges have a sufficiency rating of 79.8 and were deemed “acceptable to be widened.”

“The purpose of the widening is to better facilitate the current traffic demands we currently have and to project down the line and facilitate that traffic as well,” Bailey said. “All of our bridges were designed to withhold the anticipated load based off the heaviest traffic with the heaviest load. Many of our subsidiary roads had sight distance issues involving alignment, so this project aims to address those issues with relocation of Mason Drive, Fairfield Drive, McGruits Bridge Road and Elks Club Road.”

Traffic management measures during construction include relocation of traffic signals and additional shifts of side roads. 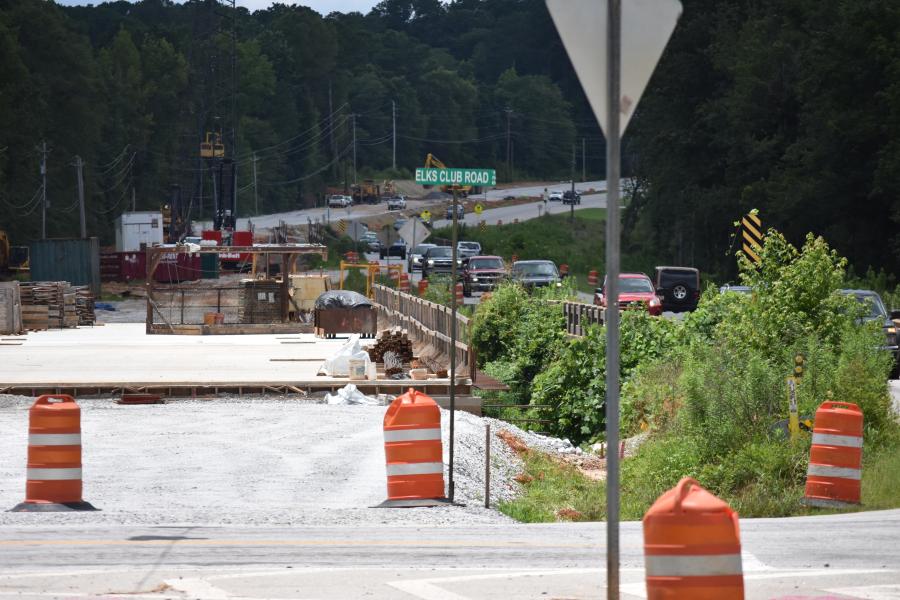 “We are staging construction to ensure that motorists are not inconvenienced and construction personnel are as safe as possible,” said Bailey. “To better facilitate this, we are doing minor traffic shifts for the subsidiary roads before the major shifts to allow motorists to adapt to the new configuration. During the time of construction, E.R. Snell elected to lower the speed limit 45 miles per hour for the safety of the public.”

“On Nov. 15 we're planning on switching traffic to the corridors over to the new Stage 1 areas so we can start on Stage 2 construction,” said Scott Briscoe, president of E.R. Snell. “Our crews are working year-round, although we may have a little bit of slowdown in winter. We had some utility issues around the bridges with some gas line work and that delayed the project slightly.”

Utilities are making efforts to reroute their infrastructure as the construction proceeds.

“This hasn't been a hard job — the challenges were nothing extreme,” said Briscoe. “Any time you work around a bridge or a river, you have to deal with water levels during the rainy season, and that's been a little challenge this year. We have bridge and grading crews working, and pipe crews for the light drainage work.”

E.R. Snell management personnel continue to update the schedule and coordinate the work to meet the delivery date.

“Communications with GDOT has always been good,” said Briscoe, who noted that issues are resolved rapidly as the project is a straightforward one.

The majority of the work is done via day shifts, with some paving operations taking place at night.

Briscoe added that traffic is a constant concern for the crews, which are building the new lanes like a train in motion, with multiple moving parts.

“In addition to the road work,” said Briscoe, “we have a lot of storm drains and boxes to install. The utility relocations and installations are the responsibility of the utilities, but we're coordinating this work.”

The existing bridges continue to be used, with no off-site detour while the new bridges are being constructed.

“We're recycling the asphalt from the old roadway,” said Briscoe. “The concrete will be broken up and used as fill material. A lot of materials can be recycled.”

The project is about 20 mi. from E.R. Snell's main yard/repair facility. It is using a variety of standard equipment, such as cranes (Link-Belt and Kobelco), as well as excavators, dozers, loaders, backhoes, motorgraders, rollers, and pavers manufactured by Cat, John Deere, and Komatsu. 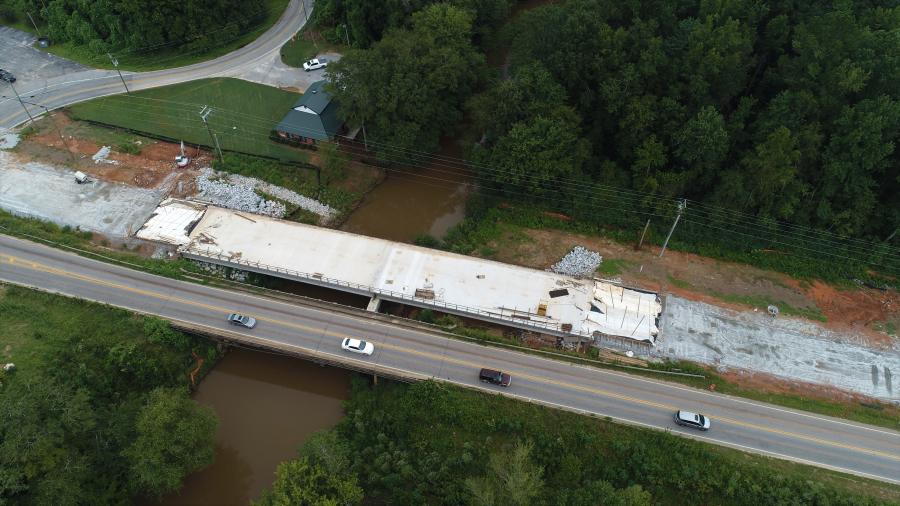 General wear and tear issues include parts and teeth, roughed up edges, and tires.

“Most repairs can be done within a day,” said Briscoe, who added that the maintenance crews are top-notch and no additional equipment was purchased or rented for the job.

Briscoe said that good communications with the dealerships are essential, especially in knowing what the company will require in terms of replacements.

“Good service, repairs, and replacement parts when you need them are important considerations,” he said, “and price is always a factor.”

The general contractor usually replaces equipment based on age and number of hours used.

With about 1.5 years to complete the project, Briscoe is confident in the ability of his crews.

“We try to run a family business and to have everyone involved in the end goal,” he said, “and keep them involved in the scheduling, day-to-day activities, and how decisions are made.”