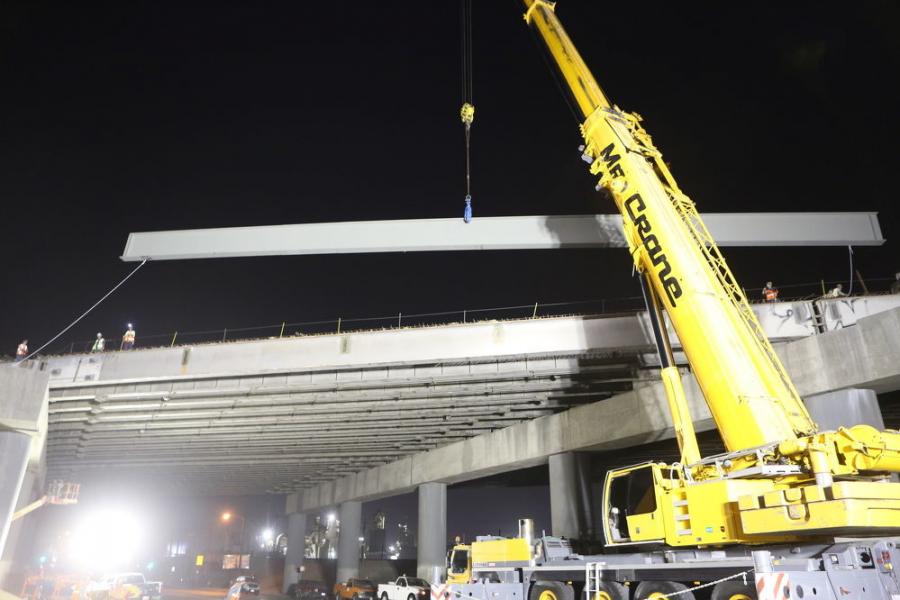 Here, a beam is about to be placed on a new bridge. Night work was essential on the busy freeway.

The California Department of Transportation's (Caltrans) $55 million Interstate 5 High Occupancy Vehicle (HOV, or carpool) lane project between State Route 134 (the Ventura Freeway) and Magnolia Boulevard is expected to be substantially completed this Spring.

"This is one of several projects that make up Caltrans' ongoing $1.3 billion I-5 North improvements on I-5 (the Golden State Freeway) between SR-134 and State Route 118," said Michael Comeaux, public information officer, Caltrans — District 7. "This project is widening I-5 to add 2.7 miles of HOV lanes in each direction in Glendale and Burbank, where I-5 had four lanes in each direction at the outset of the project. Upon completion, I-5 will have one HOV lane plus four regular freeway lanes in each direction." 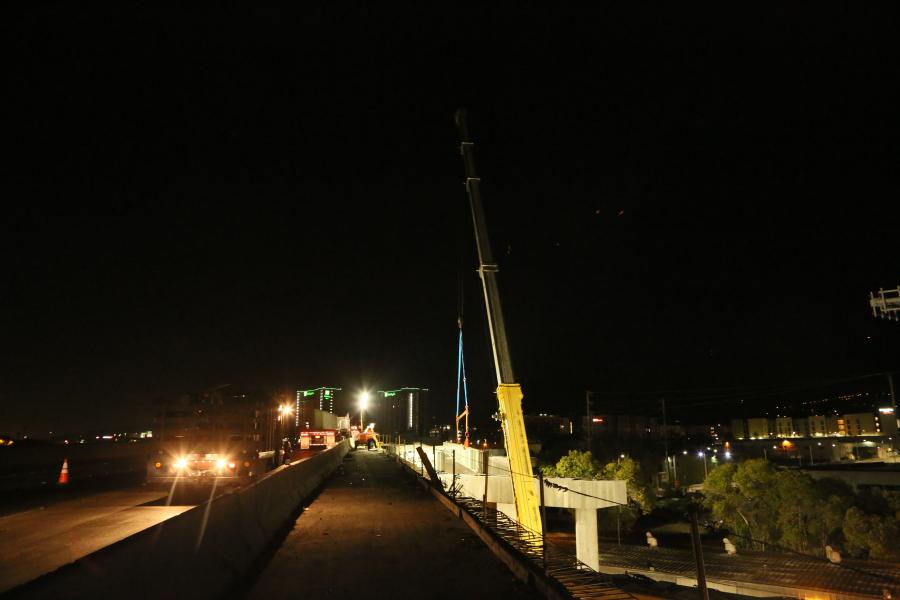 The design phase of the project was completed in March 2009, and the contract was awarded to Security Paving in December 2010, with construction starting in February 2011.

A key subcontractor on the project was Mr. Crane, a firm that provides operated crane and rigging services, which lifted and erected 32 steel girders (between 94 and 104 ft. long) for eight spans that weighed between 30,000 and 58,000 lbs. for the Providencia Avenue bridge. The crews, up to 10 people, were on-site for nine evenings in August 2016.

"We had the freeway and street closures that were required," said Erin Parker, Mr. Crane's Bridge Girder Project Manager. "Our crews would show up at 10 p.m. and plan to make sure that everybody was on the same page — we went over the bracing procedures with Security Paving and worked hand-in-hand with them to get the girders in place. After the girders were placed, they would brace them in their final position."

The lane closures began at 11 p.m. and they had to be re-opened at 4 a.m. precisely.

"Our window was pretty finite," said Parker. "Our Grove GMK 6350 all-terrain hydraulic truck crane was stored in off-hours in a dirt lot close to the site and we were able to put it in place rapidly. During the course of work Mr. Crane and Security Paving crews developed a rhythm, but you have to avoid complacency, as it is one of the biggest causes of injuries. Communication with Security Paving was really critical and we remind our crews ‘that even though we all think we know what the next step is, let's make sure no one gets caught off guard — that's when bad things happen.'"

Caltrans financial penalties for late lane re-openings were substantial — in the thousands of dollars, on a per-lane per-minute basis. To avoid these penalties, time was measured to the second.

"With the potential financial impact of opening a freeway or road late, we timed each interval and if it took 37 minutes and we had 45 minutes left until the closure ended, that would be the last girder for the night – the fine were prohibitive and it didn't make sense to push the envelope," said Parker. "Our work was not long in duration, but it was super time sensitive. Once we got the closure, we were moving. I worked closely with my rigging superintendent, Matt Fruhling, who consistently gives me the best iron workers, which is so critical on these jobs."

Mark Sovocool, Mr. Crane's Engineering Manager, also played a critical role in the operations, validating methodology and providing detailed drawings of the picks that gave all stakeholders confidence in our plan. 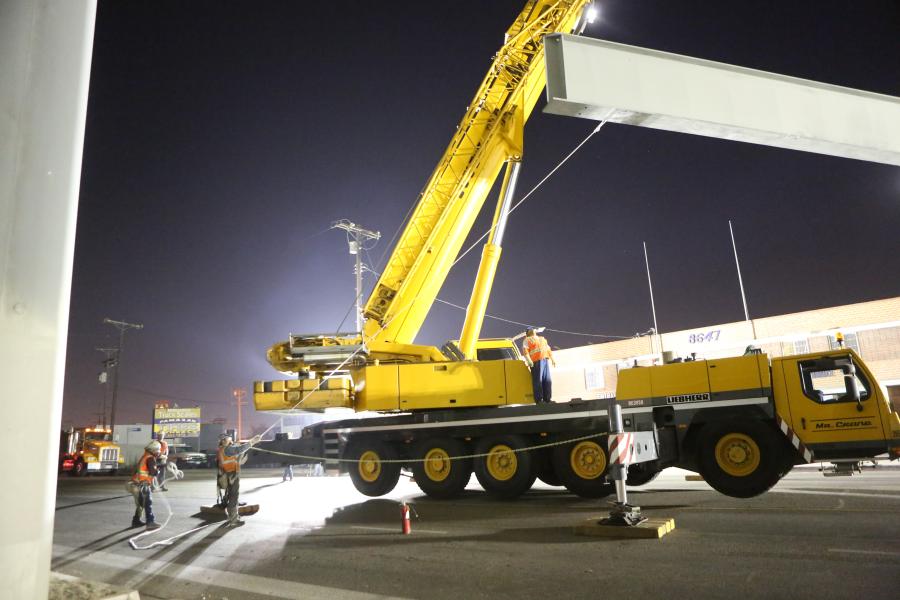 "I took the measurements, and come up with a general game plan on how best to execute it, but it was Mark that created the CAD drawings for our lifts, rigging, and execution — making sure we would have enough head room," Caltrans, Security Paving, and all involved required that these drawings be submitted for review to give a visual component to our methodology. They were instrumental in making sure everyone grasped the scope of the work and that it was within the capabilities of the crane; and that it was a well-thought out plan, even down to the sling angles. If an angle is too small, the sling tension can cause issues at the connection point or potentially the girders themselves."

A typical crew consisted of Parker, Fruhling, a safety manager, four iron workers, a crane operator, and an oiler.

No major repairs were required during Mr. Crane's time on-site with only preventative maintenance being performed between the lifts.

"We have our pre-inspection and the rest is preventative maintenance," said Parker. "We try to make sure that everything is tip-top before the machine leaves the yard because once it goes out to the site, it's there for the duration and making repairs in the field are extremely difficult. It's the same thing with the rigging – it's all inspected. Even for light wear and tear, we'll send it to get pull tested beforehand so that everything is in optimum form so we don't have anything go sideways."

Overall, there were many Security Paving and subcontractor crews on-site, with the general contractor hiring many local and regional subcontractors.

More than 62,000 cubic meters of dirt and other materials has been excavated. Materials brought in include more than 5,900 metric tons of asphalt, more than 100,000 regular tons (more than 90,000 metric tons) of concrete pavement has been poured, and about 1.5 million kilograms of structural steel has been placed for the bridges. 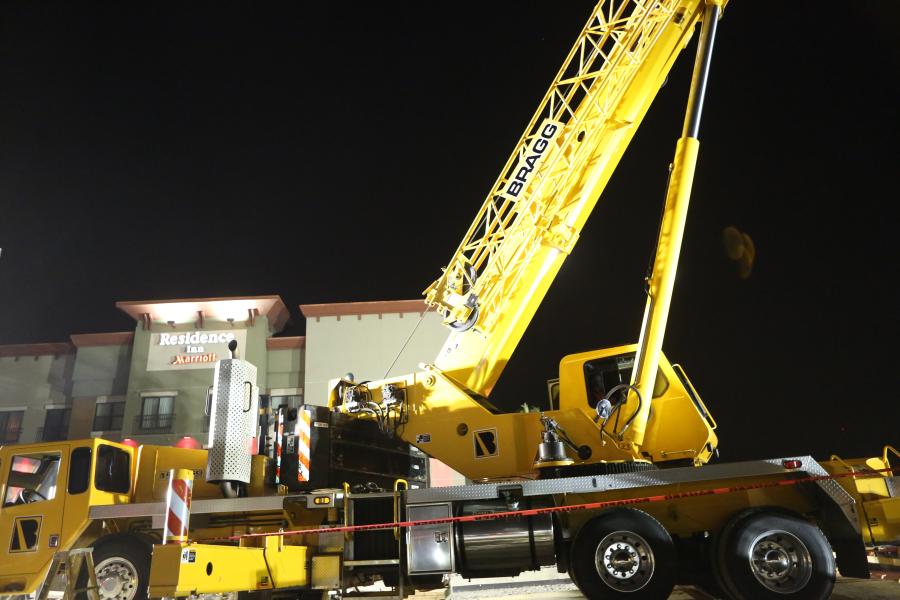 Equipment-wise, Security Paving and the subcontractors are using a variety of cranes (including Liebherr), excavators, dozers, skid steers, backhoes, loaders, rollers, pavers, and other standard construction machinery that is purchased and rented from local and regional dealerships.

"We work closely with Liebherr for some of our bigger hydraulic cranes – 350 and 500 tons," said Parker, "and we have a relationship with Manitowoc dealer for most of our crawler cranes. For our smaller RT cranes, we've been working mostly with Todano America directly."

Working closely with the dealerships is essential for Mr. Crane.

"Sometimes they'll have to write a letter to the manufacturer if you want to cover a configuration that's not in the operators' manual, " said Parker, "and that gives you the flexibility to do jobs that have more complex and unique requirements. In terms of our relationships with our customers, vendors, and dealerships, we build and foster relationships upstream and downstream to make sure that they feel they are valuable and that we're getting value. There certainly have been times when we reached out to them and they responded favorably."

On average, this section of I-5 carries more than 230,000 cars and trucks daily.

"[The project is important because it will] improve traffic circulation along the I-5 corridor, encourage carpooling, enhance air quality, reduce freeway noise in adjacent neighborhoods, improve safety for motorists, and revitalize the I-5 community," said Comeaux. "This is one of the busiest freeways in California and the HOV lanes will make a difference, LA residents are embracing the HOV lanes as they shave minutes off of daily drives."

The new lanes and infrastructure were designed by Caltrans 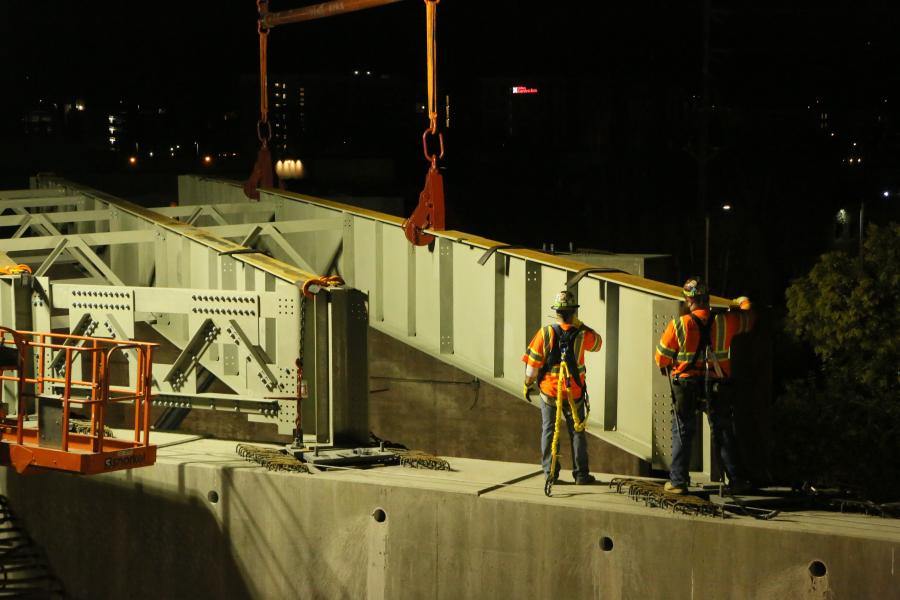 "The design called for widening I-5, including construction of concrete decks over girders at seven bridges," said Comeaux. "One of the construction challenges involved the widening of the I-5 bridge at the Los Angeles River. The widening was designed to be constructed from below, that is, from the river underneath the bridge. However, it wasn't possible to secure environmental approvals to be in the river. Therefore, everything was constructed from above. The contractor constructed a working platform from above, and crews worked on the platform. It was a wooden platform constructed on existing and new steel girders. The platform was in sections roughly five to six feet wide and running the entire width of the Los Angeles River channel, which is a concrete-lined channel."

The widening of the Los Angeles River bridge took place in the median of the freeway, not on the outside edges of the freeway. The bridge measures 194 m in length along the center line.

The new concrete pavement that is being laid on the new lanes will have an estimated service life of 40 years, which will reduce future tra¬ffic delays caused by pavement maintenance and repair costs.

Public outreach is important to Caltrans and it has held several public meetings to discuss the project and provide information on upcoming work and traffic impacts.

While much of the work is being done via day shifts, a considerable amount of night work has resulted in lane and ramp closures, and detours. Because this is a heavily travelled highway, Caltrans appreciates the patience of Los Angeles-area residents.

Security Paving has completed a fair amount of the road and bridge elements. Frank Riggins is serving as the general contractor's project manager.

The challenges associated concerning one bridge have been described. Another element of the project was the enhancement of the sound walls along I-5.

"A metal sound wall was constructed on the southbound side of I-5 at the Los Angeles River bridge because of the presence of an equestrian center and apartments nearby," said Comeaux.

"They are masonry blocks on a concrete barrier base," said Comeaux., who noted that on the northbound side of I-5, masonry sound walls were constructed from just north of the Los Angeles River to the Western Avenue off-ramp, and on the southbound side of I-5, covered the same area to the southbound on-ramp, as well as a section from just north of Alameda Avenue to Providencia Avenue. 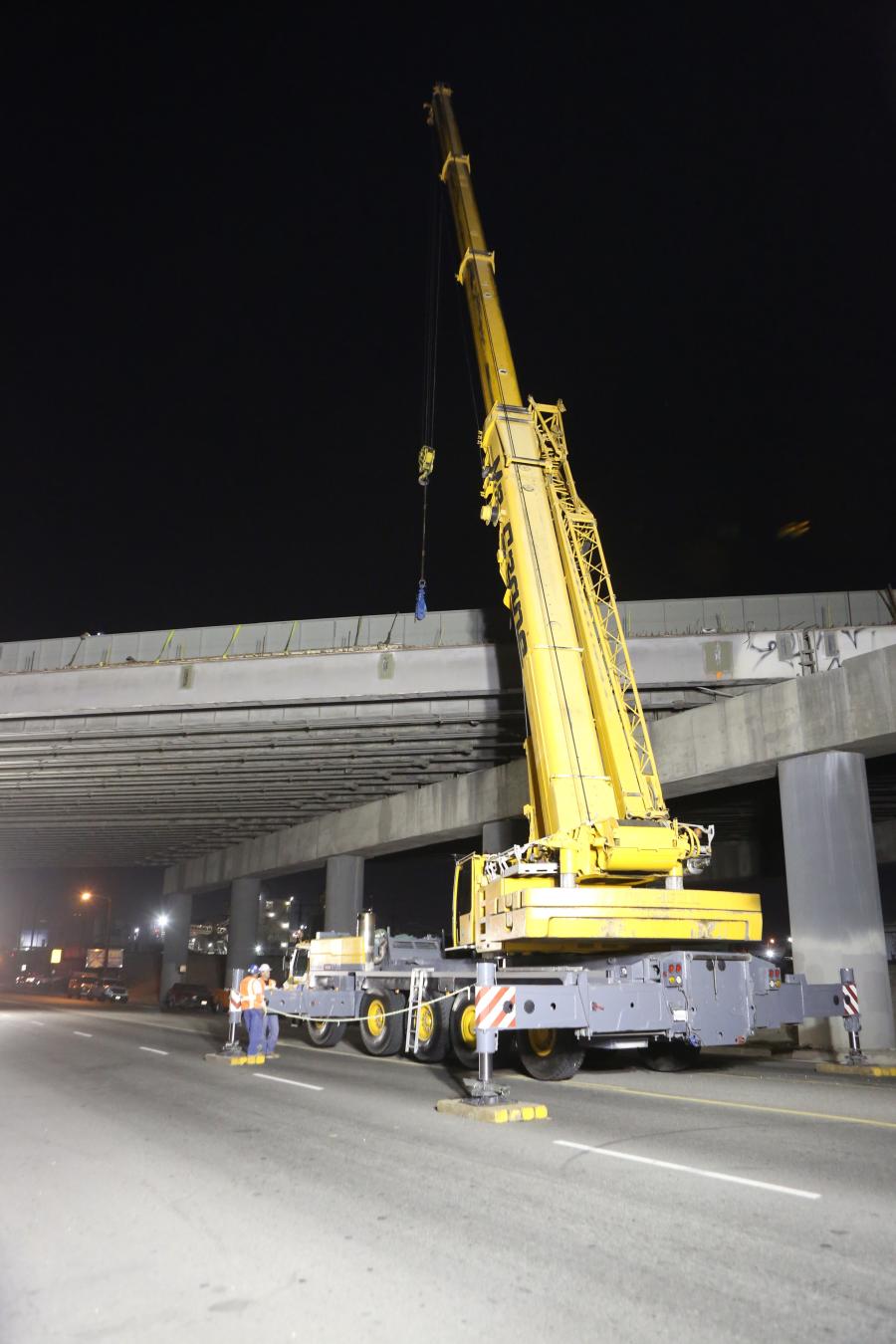 "The Los Angeles River bridge was widened on the inside, in the median, only," said Comeaux. "The bridges at Verdugo Avenue and Allen Avenue were widened on the outside shoulder, and the bridges at Sonora Avenue, Western Avenue, Providencia Avenue and Alameda Avenue were widened on both the inside and the outside. Six of the bridges have steel girders — only the Allen Avenue bridge is concrete — and a large crane was used to place new girders.

"This work was challenging at the Los Angeles River because we had obstructions such as power lines," he added. "In addition, placing the huge cranes on the bridge decks were a challenge because we had to figure out how to place the cranes or order smaller cranes to not exceed bridge loading. Using smaller cranes also presents challenges in how to rig and how to hoist the steel girders."

Caltrans has had to shut down the freeway on occasion to support the efforts of Security Paving crews.

"Girder erection on the Los Angeles River bridge and the Providencia Avenue bridge was carried out with cranes positioned on the bridge deck because there was no place for cranes to park other than on top of the bridge deck," said Comeaux. "At the other bridges, cranes were positioned on city streets below, so there were no load limitations on those cranes. We can't work over or close to live traffic, so even the streets were shut down below where we were erecting girders."

The plan of attack was to complete the widening of the bridges on the outside and then the inside.

"It was staged and the smaller bridges were finished first," said Comeaux. "The Los Angeles River bridge and the Providencia Avenue bridge were completed last during both phases. That's a reflection of the number and width of spans — five at the Los Angeles River and eight at Providencia Avenue — versus a single span or two for the other bridges."