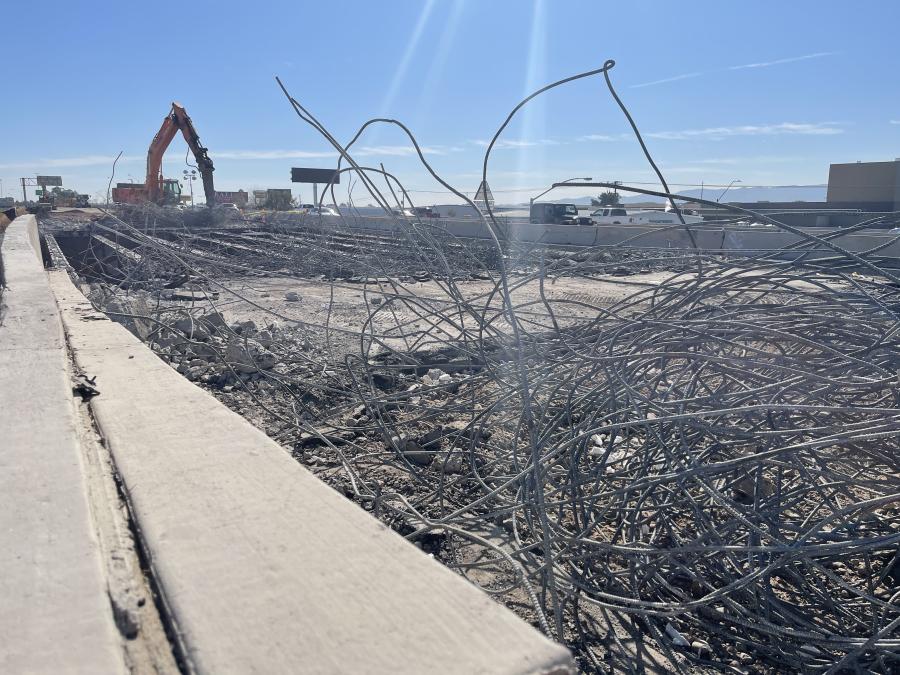 The project’s “first half” included a temporary switch of all I-17 traffic onto the existing northbound side of the bridge so crews could tear down the southbound half and build a new span in its place.

For the Arizona Department of Transportation, crews didn't get much of a break before the start of the second half of a reconstruction project to rehabilitate the Interstate 17 bridge over Central Avenue in Phoenix, Ariz.

That strategy was already known ahead of time as the project team is using "construction in stages" to build the new steel-girder freeway bridge, which will be wider and provide additional clearance for Central Avenue traffic traveling under it.

The first half of the project included a temporary switch of all I-17 traffic onto the existing northbound side of the bridge so crews could tear down the southbound half and build a new span in its place. That work wrapped up in February, allowing crews to use the weekend of Feb. 20 to 21 to switch freeway traffic to that new southbound span (with two lanes in each direction).

Just one week later, it was time to demolish the old northbound structure.

Now the project team can finally start to see the finish line. Crews will begin to build the new northbound half of the I-17 bridge south of the downtown Phoenix area. Completion is scheduled for this fall. At that time northbound traffic will be switched to its rightful place with more room to operate.

The I-17 bridge will be wider to accommodate regional plans to add more lanes in the future, including auxiliary lanes (merge lanes) between interchanges along the freeway in that area, including Seventh Street and Seventh Avenue.

The improved bridge also will provide more clearance for Central Avenue, not just for larger commercial trucks but also for Valley Metro's light rail line that also will be passing under I-17.

The Arizona Department of Transportation is overseeing this project in association with the Maricopa Association of Governments (MAG) and in coordination with the city of Phoenix and Valley Metro for a total replacement of the Interstate 17 bridge over Central Avenue located south of downtown Phoenix. The bridge was identified for replacement in the MAG Interstate 10/Interstate 17 Corridor Master Plan (also known as the "Spine Study") to support the future widening of I-17 in Maricopa County.

ADOT is removing and replacing the bridge for two primary reasons:

The Arizona Department of Transportation also is starting a project to make permanent repairs to a section of U.S. 89 near Cameron that was washed out when the state was hit with severe rain from remnants of Hurricane Rosa in October 2018.

Located about 4 mi. north of Cameron, the work consists of reconstructing that segment of U.S. 89, improving the drainage system in the area and removing an old abandoned bridge.

ADOT was able to complete emergency repairs of the 30-ft. section of U.S. 89 in less than 48 hours after the road washed out to ensure motorists had a safe driving route.

During this project ADOT will utilize smart work zone technology to help maintain traffic flow and reduce the potential for crashes. Emergency vehicles will be given a high priority to get through.

The project is expected to be completed by the fall.