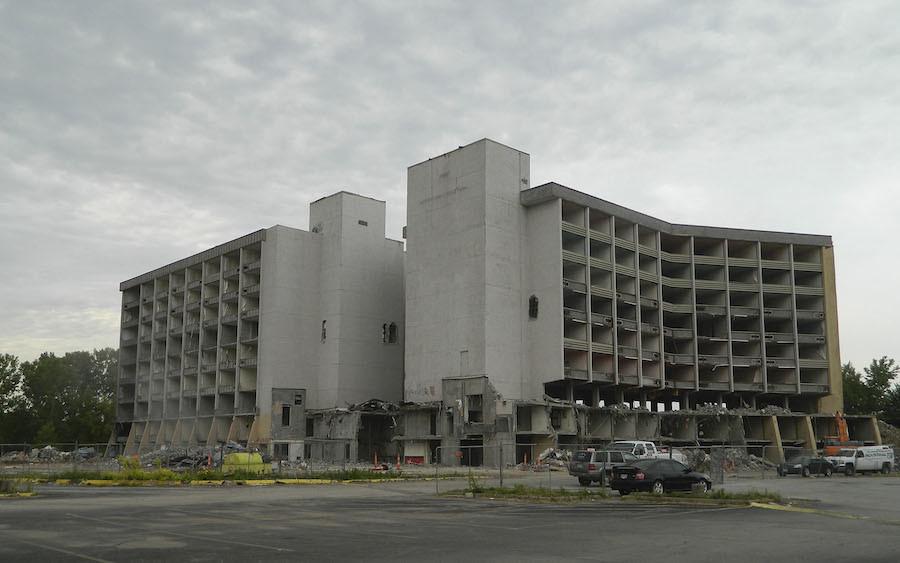 Closed in 2016, the former Park Place Hotel near Front Street and I-435 came tumbling down with the help of 500 lbs. of dynamite. (northeastnews.net photo)

A Kansas City, Mo., hotel where the FBI took down two KC mob bosses and 10 other mafia associates was razed the morning of June 24, 2018.

Closed in 2016, the former Park Place Hotel near Front Street and I-435 came tumbling down with the help of 500 lbs. of dynamite.

The hotel opened in 1975 as the Breckenridge Inn. Three years later, builders added a second tower, and with 328 rooms, the hotel was the Kansas City area's 13th largest. It had a 9,500-sq.-ft. ballroom and a 5-acre man-made lake and indoor/outdoor pool, according to the Kansas City Star.

In 1978, FBI agents followed Kansas City mob underboss Carl “Tuffy” DeLuna to the Breckenridge Inn, where he regularly used the public phones in the hotel lobby. The FBI had learned that DeLuna was using the payphones to call Joseph Agosto, his contact at the Tropicana Hotel in Las Vegas, to discuss the crime family's interests in the casinos, as The Star reported at the time.

By using the phones in the hotel lobby, he hoped to avoid being overheard by the FBI, which was listening in on more than 30 tapped telephones and hidden microphones in Kansas City and Las Vegas, reported the Kansas City Star. Retired Kansas City police detective Gary Jenkins in his book “Leaving Vegas,” recounted that the FBI had agents and secretaries stage a pool party at the Breckenridge Inn, to eavesdrop on DeLuna and get a warrant to tap the payphone he used.

The wiretaps revealed an elaborate scheme in which crime families in several U.S. cities — including Kansas City — siphoned money out of Las Vegas casinos they secretly controlled and provided evidence used to prosecute the bosses of the Kansas City mob, brothers Nick and Carl Civella, and 10 other mob figures indicted in 1981 in the Tropicana skimming operation.

A Kansas City grand jury handed down the indictments in a related casino skimming investigation that took down leading gangsters in Chicago, Milwaukee and Cleveland in 1983. Agosto, the man DeLuna called from the lobby of the Breckenridge Inn, was a star witness in the case.

Kansas City-based Industrial Salvage & Wrecking drilled more than 2,200 holes into the structure. Controlled Demolition Inc. of Maryland set the explosive charges to bring the structure down.

The hotel at 1601 N. Universal Ave. had undergone many transformations over the years and operated under multiple names but recently it had become blighted and a haven for vagrants and looters.