Crews Gear Up After Delays On Road and Sewer Project 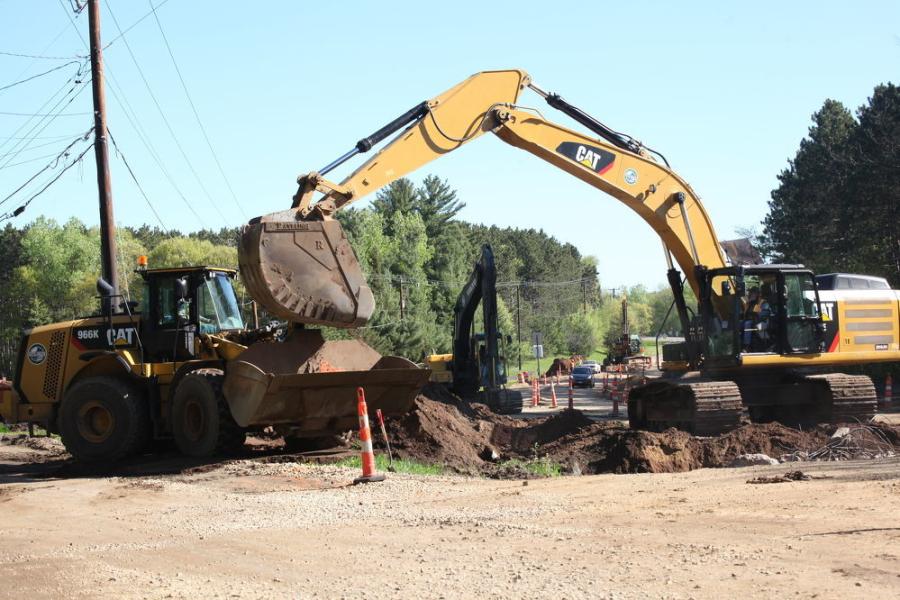 This Cat dozer pushes dirt along one of the 10 intersecting cross streets that were reconstructed as part of the contract.

As crews geared up this spring to complete the last piece on a major levee, sewer and road construction project in a small, bucolic river village in southeastern Minnesota, mother nature jumped in with different plans for them.

A blizzard blew into this part of the Midwest on the weekend of April 14 with high winds, heavy snow and zero visibility. Then, just a week later, spring weather returned. Seasonal temperatures, sunny skies and a quick run-off of 15 in. of moisture laden snow the blizzard left behind brought a swift current and high water levels to the river.

Despite this weather hiccup and brief flooding forcing a delay in construction, crews are scheduled to complete all remaining road and flood wall work this summer. 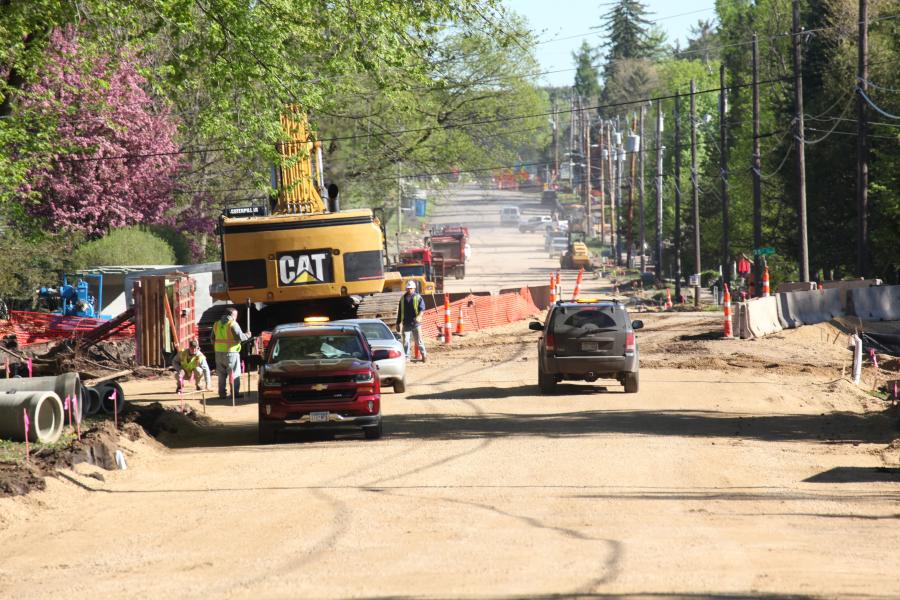 Crews worked under traffic conditions last year to rebuild County Road 21, known locally as St. Croix Trail, to maintain access not only for local residents but for the thousands of visitors that come into town to enjoy its shops and activities." />

The majority of the work in Afton is occurring on County Road 21, known locally as St. Croix Trail, and at the levee running parallel to the road several hundred feet to the east.

St. Croix Trail serves as the main street through Afton and is the only arterial street in and out of town.

When work is completed, 100 residents and businesses in town will be hooked into a new, sanitary sewer treatment system; new storm-water pipes and treatment ponds will ease local flooding and clear out contaminates before any storm water hits the river; and a new road with above ground improvements will perk-up street aesthetics.

The city of Afton brought in WSB and Associates to plan, design and manage the project through construction.

WSB and Associates is a consulting and design firm providing engineering, planning, environmental and construction services to clients in the government, energy and commercial markets, according to its website.

Geislinger and Sons won the $12.5 million contract. According to the company's website, the company was formed in 2007 and specializes in the construction of roads, utilities, lift stations, heavy equipment hauling and underground bores and tunnel work.

For a town of this size, the scope of the project is huge. 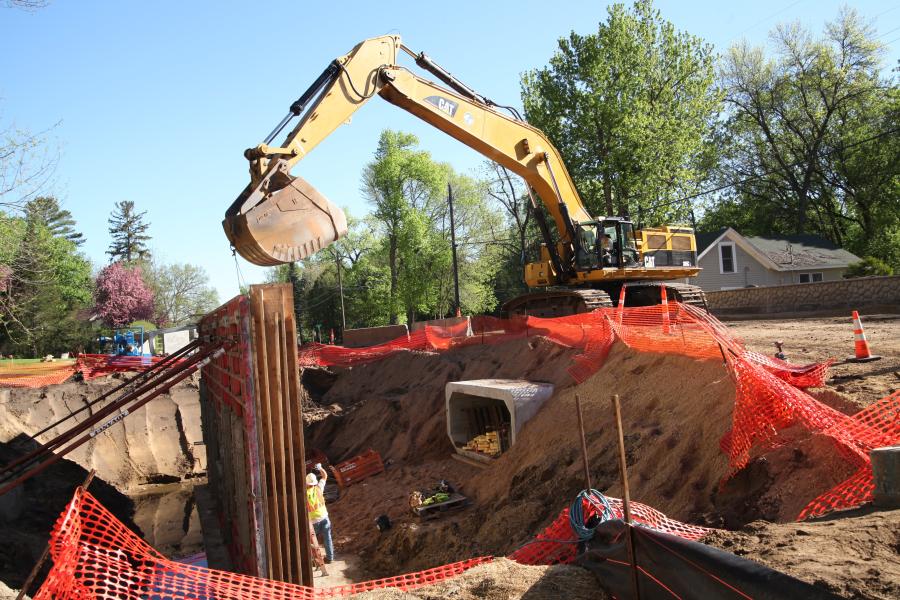 Construction details include the reconstruction of 1.1 mi. of St. Croix Trail from sidewalk to sidewalk plus the rebuild of another 10 short intersecting streets.

Crews completed the majority of the street work last year, including new street lighting and pedestrian and landscaping improvements.

Underground, approximately 13,000 ft. of storm water pipe was installed last summer. This work included the construction of two bio-infiltrations ponds, pervious pavements and a linear rain garden at the base of the bluff to filter out storm water contaminates.

Storm water upgrades featured the reconstruction of an existing box culvert to carry a small creek under St. Croix Trail. Located at the south end of the road rebuild, this work closed the road down at that end and caused a lengthy detour for through traffic.

At the same time, it is an environmentally sensitive area because of its location on the banks of a federally protected river. A Native American effigy mound was identified during the early design phase that put a hold on the project.

Native American tribes, local residents and the State Historic Preservation Office were adamant that this mound not be disturbed, according to the project website.

As a result, initial designs were changed to limit the impacts on the mound.

“We had to tweak the alignment of our sanitary and storm sewers that originally ran under the mound and re-route them around it to avoid any excavation in the area,” said Nick Guilliams, project manager of WSB and Associates. “We had to move the location of a storm-water detention pond. That process took some time and delayed the project for about a year.”

Most of the heavy construction took place in 2017, and the accelerated work pace forced a schedule with very little room for compromise. 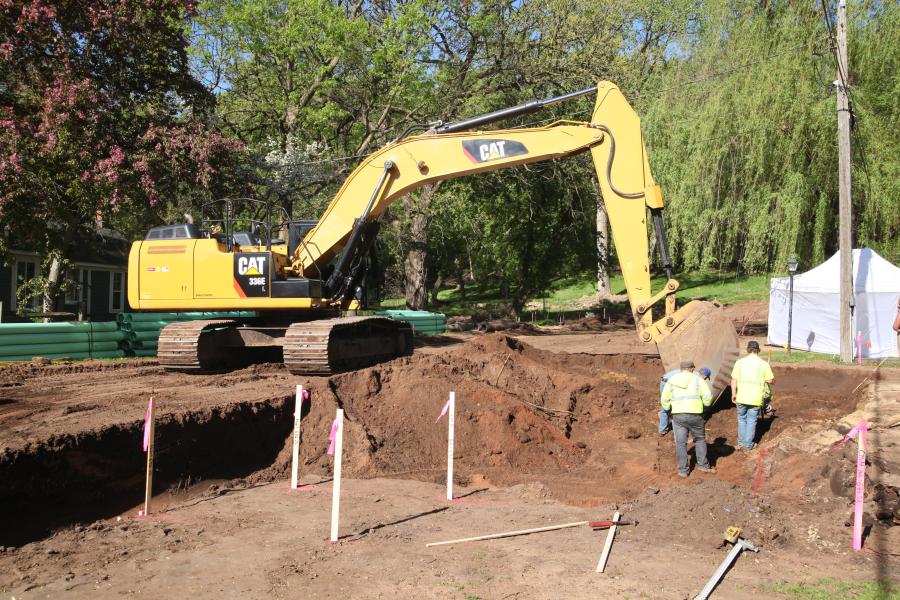 The 26-day closure of St. Croix Trail last year to build the box culvert caused a 9 mi. detour for through traffic.

Meeting key milestone dates and tight coordination with traffic and sub-contractors while maintaining access for residents, visitors and vehicles were some of the biggest challenges, Guilliams said.

Digging and grading operations dominated last season's work and were a major challenge for excavation crews and the contractor.

“The grading, the utility relocations and the pipe and concrete crews all working together for a large part of the project last year made it pretty challenging.

“The whole project was phased and designed to really accommodate and limit the impact to the residents and businesses and also accommodate special events like the Fourth of July, which is a real big deal here. So, a lot of the milestones were really designed around these events,” Guilliams said.

With thousands of feet of storm and sanitary sewer pipe to be installed, there were three pipe crews working alongside grading and concrete crews at times in very limited space surrounded by residential homes, store fronts and visitors, Guilliams noted.

The depths of the pipe installed support the intensity of the digging operations. Excavator operators reached down to depths ranging from 3 to 17 ft. deep to place new sanitary and storm-water pipe, according to documents posted on the city of Afton website.

The sub-cut for the new road averaged 2 ft. in depth.

“The utility relocations complicated things from a coordination standpoint,” Guilliams added. “We had to get them out of the way and we were moving quickly so that was an issue. Knowing that it was an active construction site, we wanted it to look good; it was just a lot of work.”

Traffic control was a huge challenge on this project because access in and out of town is limited and many of its residents have homes just off of St. Croix Trail.

These concerns figured heavily into design discussions between Washington County, which has jurisdiction of the road, and city of Afton staff members.

With dimensions of 12 ft. wide, 5 ft. tall and 40 ft. long, the box culvert construction was a project on its own.

“During the design phase and working with Washington County and the city of Afton, we agreed to a 26-day closure to accommodate and expedite the box culvert construction, which was a big help. In order to do that work, it really required a full road closure.

“Doing it under traffic conditions would have both delayed things and made it much more complicated. That was the main reason we needed that closure,” Guilliams explained.

As construction winds down through this summer, work crews will complete the flood wall work, the rain gardens, landscaping and punch list items.