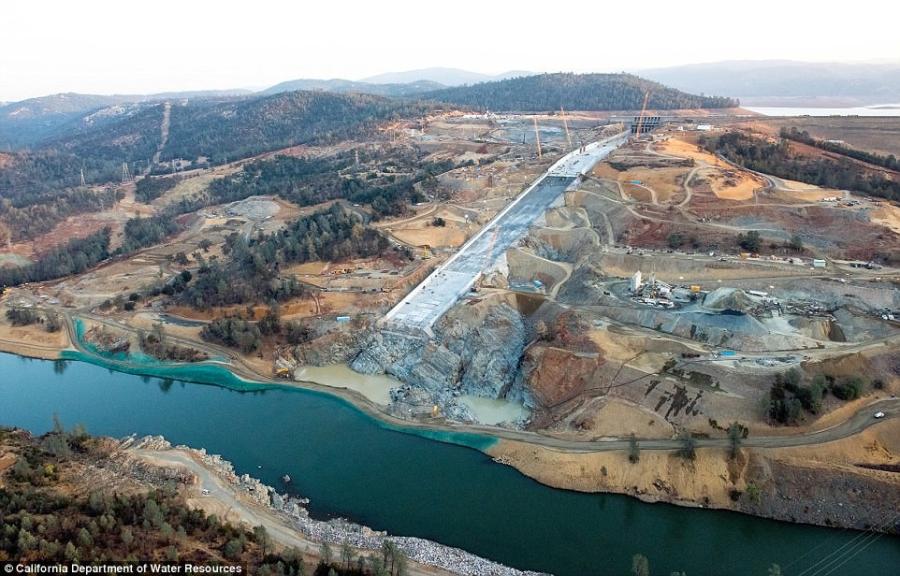 As of now, the cost for the repairs totals $870 million., which includes Kiewit's $500 million contract, $210 million in additional recovery costs and $160 million for emergency response after the first spillway incident in 2017, Appeal-Democrat reported.

Crews are making progress on repairs to the Oroville Dam's emergency spillways, the Department of Water Resources said.

According to Kiewit Infrastructure West Co., the company contracted to perform the repairs, work stopped heavy construction on the main spillway over the winter, but plans to start back up in the coming months to meet its January 2019 deadline, Appeal-Democrat reported.

“Our crews will be ready to go May 1, weather permitting, said Kiewit Project Director Jeff Petersen.

The final phase of the main spillway's repair work includes:

Once complete, the spillway will have the ability to release up to 270,000 cu. ft. of water per second, although it is unlikely that the spillways will ever need to handle that much water, since past releases have never been more than 160,000 cfs, and the levees downstream would not be able to handle more than that.

According to Ted Craddock, the Department of Water Resources' assistant deputy director of the State Water Project, much of the work completed during the first part of 2018 has been on the Dam's emergency spillway.

Ultimately, the Oroville Dam repair project's aim is to build a secant pile wall below the emergency spillway's crest to help prevent erosion of the hill when water flows through, Appeal-Democrat reported. Petersen said this portion of the project is about 95 percent finished, and should be finished by March 2018. Crews can then begin working on creating a roller-compacted concrete splashpad to help deter uphill erosion. According to Craddock, one last piece of construction will include building roller-compacted concrete buttresses at the emergency spillway's base for additional reinforcements. These should be completed later this year, Appeal-Democrat reported.

As of now, the cost for the Oroville Dam repairs totals $870 million., which includes Kiewit's $500 million contract, $210 million in additional recovery costs and $160 million for emergency response after the first spillway incident in 2017, Appeal-Democrat reported.

According to Erin Mellow, assistant director of Public Affairs at DWR, FEMA is expected to reimburse California for up to 75 percent of the costs, although if, for whatever reason, the organization does not, contractors who are part of the State Water Project would probably pick up the tab (Lake Oroville is a State Water Project Facility, Appeal-Democrat reported).