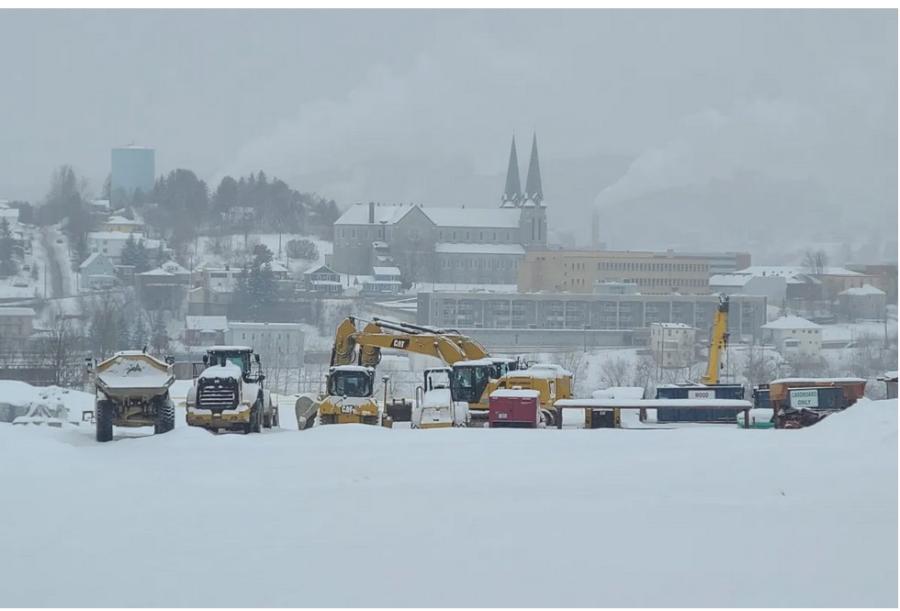 Night work on the bridge began in September, and since that time workers have constructed a pier across the St. John River and are working on land support. But for now, their primary task is building five 60-ft.-tall pier shafts in the river on which the bridge will rest.

Already completed are the concrete seals and caps needed to construct the five shafts, said Andrew Lathe of the Maine Department of Transportation (MaineDOT). He added that the structures should be finished later this winter.

When they are in use, following the bridge's late 2023 opening, the concrete substructures are designed to safely hold the bridge for a full century, according to MaineDOT.

Construction also is ongoing on land abutments — structures at the end of the bridge that are built to support the lateral pressure of an arch.

MaineDOT already is preparing for the thaw at the end of winter and plans to take the construction trestle out of the water on Feb. 15 to avoid ice jams and flooding, Lathe said.

After the ice melts and the river is clear, the trestle will be replaced, and work will continue as usual.

The new bridge is targeted for completion in 2023. For now, the existing century-old bridge is in use, but can only support no more than five tons.

Independent contractor Reed & Reed Inc., of Woolwich, Maine, and New Brunswick-based Greenfield Construction, along with the Maine and New Brunswick transportation departments, are collaborating on the project.

Accompanying the bridge project is the creation of a new land port of entry in Madawaska. The federal General Services Administration (GSA) completed the footing of most of the structure's foundation in late October.

After almost 100 years in service, the Madawaska bridge was recently rated to be in poor condition, and efforts to maintain the structure led officials in the United States and Canada to mutually decide a replacement plan needed to be implemented.

In October 2017, the 5-ton limit (equivalent to a single passenger vehicle) was posted for the bridge, creating a significant detour for traffic between the two countries. Therefore, any substantial investments to upgrade it would be impractical as it would cost more to renovate the old bridge than to build a new one.

A study by MaineDOT, the New Brunswick Department of Transportation and Infrastructure (NBDTI), and the GSA recommended that a new bridge connect the existing border station in Edmundston, NB, to a fully modernized facility in Madawaska.

Reed & Reed's crews are constructing the structure approximately 1,300 ft. upriver of the old bridge at an approximately 45-degree angle. Because of the new alignment, the crossing will be nearly twice the length of the existing one. Additionally, it will feature wider travel lanes, and added shoulders on both sides, including a raised sidewalk on the downstream side of the new bridge.

Demolition of the old bridge is scheduled to begin once traffic is moved onto the new river crossing.