As part of the development of the location, Citizens worked with the state to remove the landfill and make it an environmentally sound location. 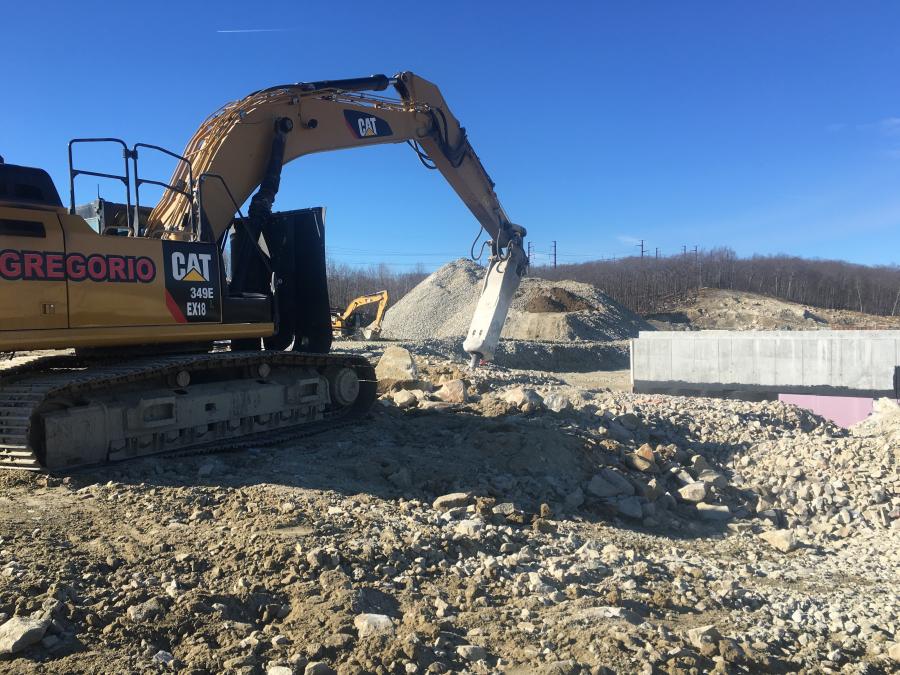 Crews had to remove the existing landfill and blast bedrock, which required large quantities of explosives to prepare the land for construction.

Despite dealing with an extremely complicated site, construction crews in Johnston, R.I., are making significant progress on a new corporate campus for Citizens Financial Group Inc. The project, with a reported cost of $250 to $300 million, will provide room for more than 3,000 colleagues, and offer a number of services for those who move to the new location.

“With the lease on our facility in Cranston up in 2018, we looked at various options, including renewal, moving to another facility or building a new place we can call our own,” said Mike Knipper, head of property for Citizens Bank. “After a thorough review, it became clear the best and most cost-effective option was a new campus, which allows us the opportunity to design a facility that reflects our customer-centric culture and that takes advantage of current technology.”

Knipper said the decision to locate in Johnston was not made overnight.

“After a long and thoughtful search, we chose Johnston for its proximity to our headquarters in Providence, and for the convenient access for our many colleagues who live up and down the I-95 corridor.”

Johnston has granted the project a tax-stabilization agreement, which has set taxes at $250,000 each year for 20 years, for a total of $5 million. Citizens and the Rhode Island Department of Transportation are splitting the cost to build a new exit and entrance ramp onto Route 295, which is expected to be complete by year's end.

Recently, Citizens Financial Group Chairman and CEO Bruce Van Saun and other bank representatives took officials on a tour of the bank's new corporate campus, which is under construction on a site off Greenville Avenue in northern Johnston.

“It was great to have so many of our partners out to the site to see the progress,” said Knipper. “Governor Raimondo, Mayor Polisena, state and local officials and Citizens colleagues and executives were welcomed by the construction workers who are there getting the job done, day-in and day-out. It was actually very powerful to see how much this project is impacting not only Citizens, but also those who have a job because of the construction. It was a great day, and we look forward to having more tours as the project progresses.

“There's a lot to get done on this project. It's not just the site of the campus, but also the on/off ramp to the highway and the sewer line being run down the street by Narragansett Bay Commission. But each day we are one step closer, and we are making excellent progress.”

“This requires considerable planning and collaboration to ensure that everything gets done well and on time. Our colleagues are very excited about the new campus. It's a purpose-built site with a lot of amenities, and the way we design the space will help our colleagues work more collaboratively on behalf of our customers. Many of our colleagues have embraced the Johnston community, spending time volunteering to cleanup historic cemeteries, parks and supporting the local sports teams.”

The property was a wooded site with dumping grounds on the premises. As part of the development of the location, Citizens worked with the state to remove the landfill and make it an environmentally sound location. The 420,000-sq.-ft. corporate campus will sit on 123 acres of land that has been developed to fit with the natural environment. The campus will include dining and fitness facilities, as well as fields and trails that will be available for use by the local community.

“Doors will open at the new campus in 2018,” said Knipper. “It will house more than 3,200, serving a wide range of activities, including a call center, operations and technology groups and various corporate functions.”

To engage the base, a blog was launched internally, offering updates on construction. Colleagues have been allowed to comment and offer advice. The property services division also has been conducting surveys to determine preferences.

Dimeo Construction serves as general contractor on the project. According to senior project manager Joseph Bolton, taking on a large area with no immediate utilities surrounded by wetlands was an early concern.

“Site work and infrastructure are two big challenges for this project. The site work is a very large package, with many unknowns. Enabling the utilities to the project site is also a challenge, since over two miles of underground piping needs to be installed, and almost that distance in overhead wiring.”

Crews had to remove the existing landfill and blast bedrock, which required large quantities of explosives to prepare the land for construction. Landfill removal started in May 2016, with site preparation beginning three months later.

“Everything thus far has gone very smoothly. We are working on some utilities on site, but the majority will be in full swing this spring, targeting completion by fall.”

Main equipment being used on the job includes excavators, loaders, dozers and rock processing machinery. Materials include 60,000 tons of 1.5 in. rock.

As for the elements, said Bolton, “Weather has been a factor, but this winter there were not big issues. Move-in should commence in August of 2018, with final completion in the fall.”

Citizens Financial Group, Inc. is one of the oldest and largest financial services firms in the country. High Street Bank, founded in 1828, established Citizens Savings Bank in 1871. By 1981, Citizens had grown to 29 branches in Rhode Island, with approximately $1.0 billion of assets. In 1988, it became a wholly-owned subsidiary of the RBS Group.

Citizens expanded through a number of bank acquisitions, which magnified its presence throughout New England and into the Mid-Atlantic and the Midwest. In doing so, Citizens made the move from local retail bank to one of the biggest retail U.S. bank-holding companies.—CEG