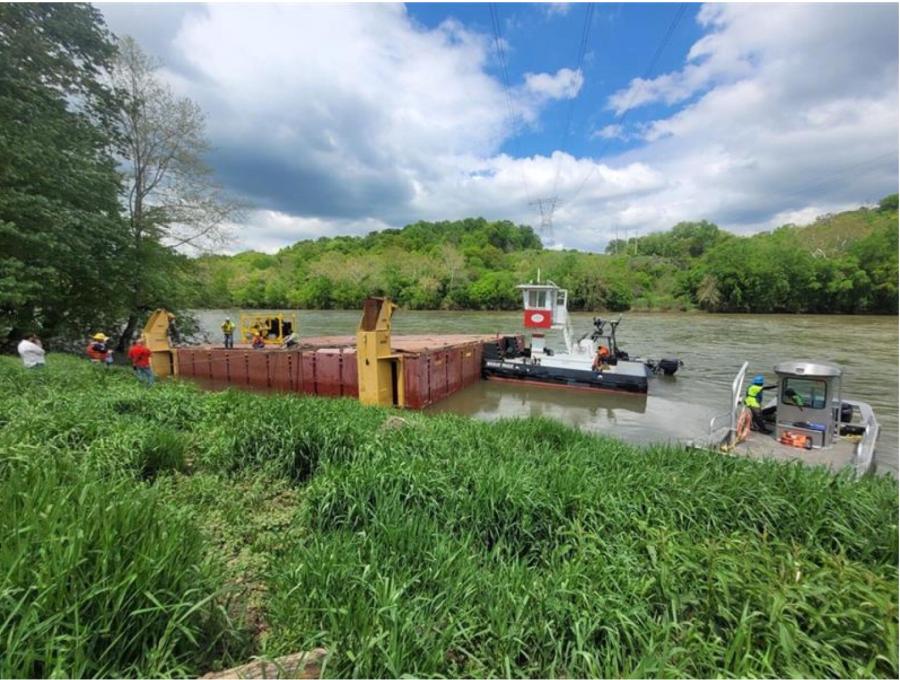 A tug boat moves a construction barge from Dam 4 where it had been stuck since breaking loose from its mooring following heavy rain. (Photo courtesy of National Park Service)

A contractor is moving equipment to a site along the West Virginia shore to begin removal of the larger of two runaway work barges that were swept down the Potomac River in early May due to high water levels from a series of heavy thunderstorms upstream.

Kiewit, based in Omaha, Neb., and one of the nation's top engineering firms, is bringing various machinery, including a crane, to private land riverside and on Harpers Ferry National Historical Park property to prepare to remove the larger vessel that became lodged on the remnants of Dam No. 3 near the town of Harpers Ferry, W. Va., said Christiana Hanson, a spokesperson with the Chesapeake & Ohio Canal National Historical Park, in a news release.

Kiewit had been working on a rehabilitation project at Williamsport, Md.'s McMahons Mill, along the old C&O canal, when heavy rains wrenched loose two construction barges from their moorings on the weekend of May 7-8, sending them downstream toward Harpers Ferry, located at the confluence of the Potomac and Shenandoah rivers.

News reports in May, shortly after the accident, noted that the larger barge became unattached from its anchorage on the Maryland side of the river on the evening of May 7, but did not head down the river right away. The smaller barge broke loose the next afternoon and both vessels started their treks downstream riding the crest of the higher river flows.

Hanson explained that the construction barges had been properly secured with ropes, but added that the raging river, combined with debris that included whole trees and giant branches, tore the ropes to the point that the floating platforms were freed.

Officials initially feared that the barges would get past the dams and head in the direction of Washington, D.C., causing damage along the way.

Eventually, though, each became stuck at two separate dams above Harpers Ferry, having done little to no harm to any bridges or dams. In addition, no injuries were reported from the incident.

The smaller of the two barges was removed from the river on May 12, the Hagerstown (Md.) Herald Mail noted June 16, but extricating the larger vessel has meant formulating a more intricate plan.

Hanson noted it could take at least four weeks to remove the remaining barge, but the timetable to do so is weather dependent and could be delayed by high waters.

The barge is close enough to the West Virginia shore for Kiewit to use the excavator that has rested on the floating platform for the last six weeks to move other materials from the vessel to the shore, she added. If there is high water on the Potomac, however, excavator operators will not be allowed to work from the barge.

Once the other materials are removed, the crane will lift the barge pieces and the excavator from the river, the Times-Herald reported. The crane is expected to pull the pieces up, so they do not damage the dam or the historic armory stone wall along the river. It also will take out pieces of the barge until the last one holding the excavator remains. Once that machine is removed, the last part of the vessel will be moved to the shore.

Kiewit's next step will be to pluck equipment from the Potomac that fell off the smaller barge, below Dam No. 4, including a smaller excavator that sunk along with platform pieces and some hand tools — all of which are visible when the river level is lower, Hanson explained.

She added that the contractor is working on a recovery plan for the sunken equipment.

Construction Has Resumed at McMahons Mill

Replacement barges were back on the Potomac at McMahons Mill earlier in June and rehabilitation work at that site has continued, Hanson noted.

The approximately $18 million project includes restoring a section of the towpath and rebuilding a stone wall along the canal to help it better withstand flooding conditions on the river. Kiewit is working on a nearly mile-long section of the canal southwest of Downsville, Md., according to the Hagerstown newspaper.

Until the barge retrieval is complete, and to ensure public safety, the Potomac Street Extension/Armory Canal Trail in Harpers Ferry will be closed at the trail's south end, according to a National Park Service (NPS) news release. In addition, access to Potomac Street in the historic town, off Bakerton Road, also will be closed to the public.

NPS officials are recommending that river users stay as far to the Maryland shore (the left side) as possible to avoid the work area. It also urges people not to approach the site with other boats or try to board the barges on hand for the retrieval.