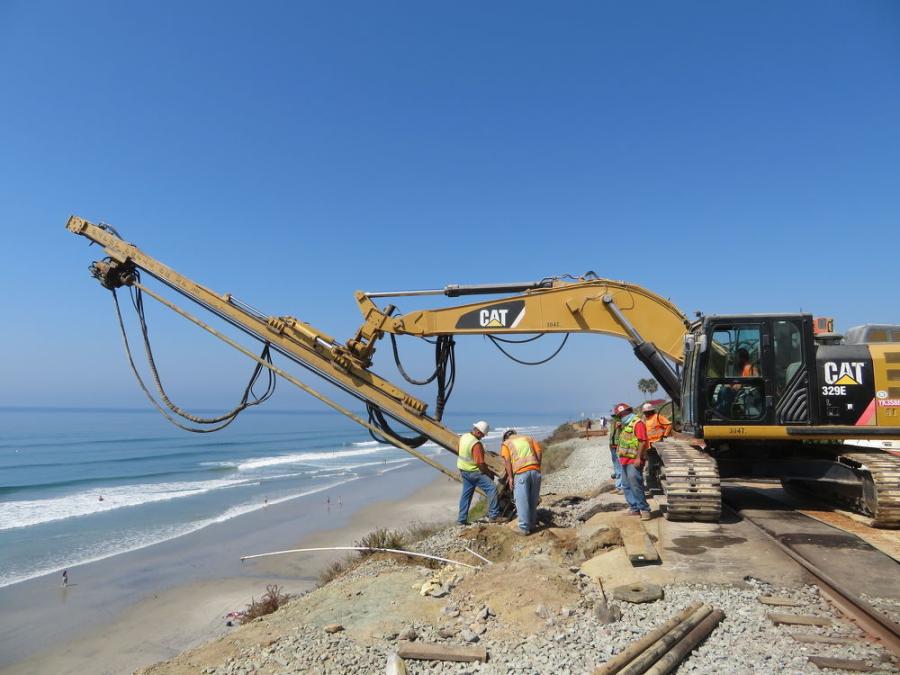 The coastal bluffs in the city of Del Mar is an integral part of the 351-mi. Los Angeles-San Diego-San Luis Obispo (LOSSAN) rail corridor that is a vital link for passenger and freight movements within San Diego County and San Diego, Los Angeles and points farther north.

Crews from Blue Pacific Engineering and Construction (BPEC) completed Phase 4 of the Del Mar Bluffs Stabilization project in December 2020 for San Diego Association of Governments (SANDAG) and the North County Transit District (NCTD) to stabilize portions of the coastal bluffs in the city of Del Mar. This is an integral part of the 351-mi. Los Angeles-San Diego-San Luis Obispo (LOSSAN) rail corridor that is a vital link for passenger and freight movements within San Diego County and San Diego, Los Angeles and points farther north.

SANDAG and NCTD are currently seeking additional funding (up to $100 million) to accelerate the final phases of stabilization projects, which is expected to be completed by next summer. 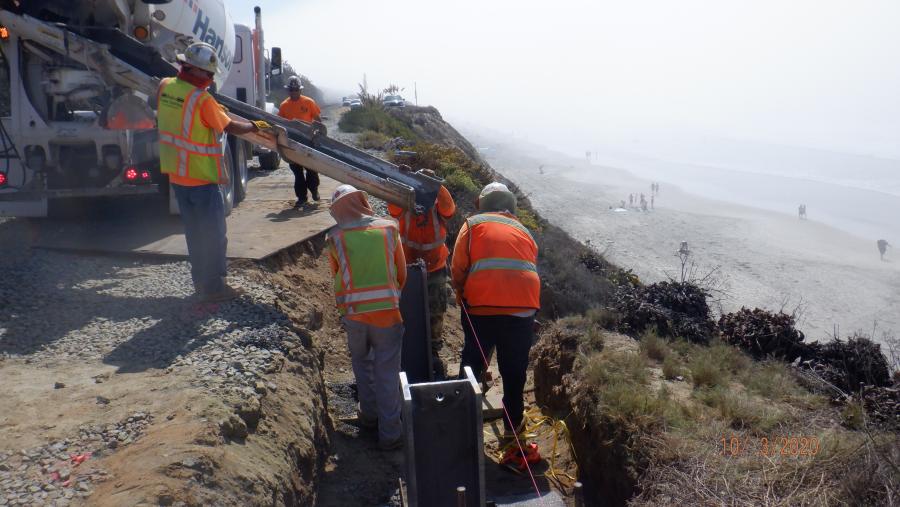 Since 2003, three stabilization projects along coastal bluffs between Coast Boulevard and Torrey Pines State Beach have been completed, which saw the installation of more than 200 support columns into the bluffs and critical investments into drainage infrastructure to help reinforce and protect the Del Mar bluffs.

"The LOSSAN rail line is a vital component of the north-south corridor through the San Diego region," said John Haggerty, SANDAG director of engineering and construction. "The NCTD COASTER commuter rail service, Amtrak's Pacific Surfliner intercity service and BNSF Railway freight service all rely upon this segment of track to serve a combined 7.6 million passengers a year and $1 billion in goods and services that are supported by rail line reliability. In 2019, these services relied upon 44 passenger trains and six freight trains. By 2030 these numbers will have increased to 78 passenger trains and 22 freight trains, only further illustrating the need for rail line reliability. SANDAG is currently commissioning an in-depth analysis of the economic impacts of LOSSAN rail corridor to the San Diego region.

"This stabilization effort is especially critical in protecting the bluffs in the event of an earthquake or large storm event," he added. "Stabilizing the bluffs will increase safety and service reliability for passengers and freight by minimizing the chances of track damage due to bluff retreat and seismic events. Directing storm water runoff more effectively across the bluffs will help lower the potential for erosion during large storm events. The installation of support columns will further help to protect the track bed from erosion."

Phase 4, which began in March 2020, installed smaller support columns that are now stabilizing localized areas and sea walls; constructed a drainage channel on top of the bluffs; repaired concrete channels and storm drain outfalls; and stabilized existing headwalls. The project was funded through a combination of state, federal and local sources. Additional funding is being sought for ongoing stabilization over the next 30 years to preserve the track-bed support.

The Del Mar Bluffs stabilization effort is an ongoing, multi-phase initiative to maintain a stable track bed along the coastal bluffs and protect the railroad from erosion, landslides and seismic events. Phase 4 was designed by HNTB Corporation. 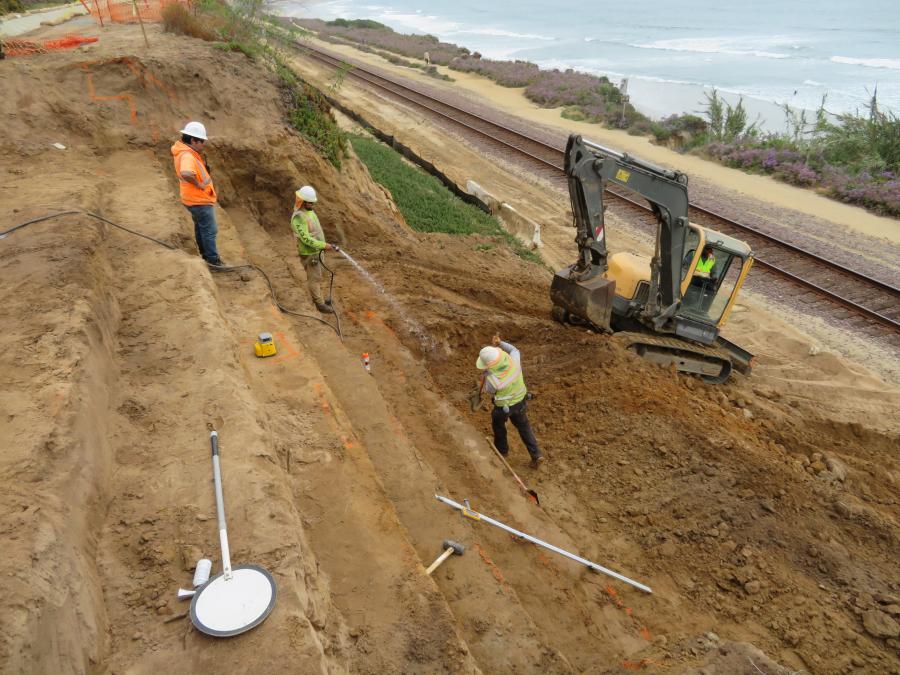 "Uncontrolled storm runoff from the streets to the east overtop the upper bluffs caused localized failures of the bluffs and flooding of the track bed," said Haggerty. "Major channels were replaced with splash walls added to control and direct storm runoff away from the slopes. Retaining structures were placed on the upper bluff to support undermined drainage channels. In order to construct the walls with limited access and workspace, soldier pile foundations were drilled from the top of the bluff using small drilling equipment. Precast concrete lagging panels were used to easily complete the retaining structures.

"The existing sea walls along the beach were constructed in the early 1960s using steel rail as the structural supports," he added. "New soldier pile supports were added to replace the deteriorated rail supports. Small drill rigs were used to drill the foundations and place steel pile supports, allowing for placement of individual elements of the support system over multiple work periods. All repair structures were completed using a concrete mix designed to withstand the marine environment and all of the new steel H piles were galvanized to provide a 100-year service life for the materials.

The Phase 4 work had a limited impact on rail operations, but much of it was performed adjacent to homes and businesses and, to a certain extent, limited access to the beach.

"The contractor and construction manager worked closely with the community to communicate construction activities," said Haggerty. "Environmental monitors identified all sensitive habitat on site and protective fencing was placed prior to start of construction. There were multiple work areas within the entire project, but the number of work areas under construction at the same time was limited. Soldier pile walls and supports were used to allow foundation drilling, placement of concrete and placement of steel in one operation, minimizing the overall time for each work area. Where new walls were placed, precast panels or wood lagging panels were used to expedite the construction. A significant portion of the work was completed from the beach. All equipment and materials were removed from the beach daily to lessen impact to beach goers."

The design for Phase 5, which is being conducted by HNTB Corporation, began in early 2020 and should be completed in late spring/early summer of 2021. The project, which is expected to cost $65.2 million, has already secured $19.9 million and will be funded by the California Natural Resources Agency, Federal Railroad Administration, State of Good Repair Transit and the Intercity Rail Capital Program.

Phase 5 will see the installation of additional columns to support the railroad; reinforce the bluffs and install retaining walls; and drainage improvements, including outlets to the beach and other stabilization and erosion control measures on the upper bluffs.

A public tender for the contract is expected to be issued in summer 2022. 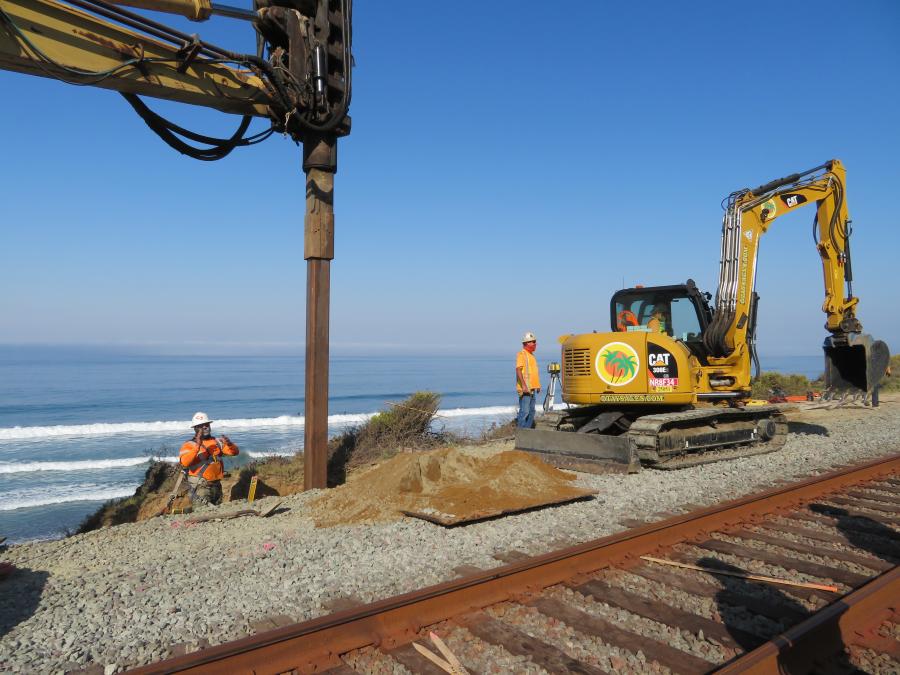 "Previous phases of the Del Mar Bluffs stabilization effort included soldier pile walls to support the railroad," said Haggerty. "There are gaps between these existing soldier piles and Phase 5 will include the installation of new soldier piles to fill in these gaps to provide support to the railroad tracks. Similar to Phase 4, soldier pile foundations will be drilled from the top of the bluff for Phase 5. Construction of the soldier piles would require a drill rig and crane located on or just east of the track and the piles would need to be located within reach of conventional drilling equipment. In addition to the drilling equipment, a delivery truck would be needed to transport the steel H piles and a ready-mix concrete truck and pump would be needed at each site for placement of concrete.

"While the methodology is well understood within the construction industry and is not highly susceptible to unforeseen site conditions, the primary concern is the potential of encountering a buried object during the drilling for the piles or for the tieback anchors," he added. "It is anticipated that the installation of solider piles cannot happen when the rails are in use. Most of the soldier pile drilling would occur at night and early morning when train traffic is much lower than during the day. Up to three drill crews could operate concurrently."

Several of the soldier piles placed in earlier phases also are nearing the end of their service life. Phase 5 will extend the service life of these piles by adding tieback anchor rods to these piles and infilling the exposed area between piles with lagging panels at the face of the bluff.

The drainage improvements proposed in Phase 5 include channels, ditches and underground storm drains within the railroad right-of-way and the corresponding outlets to the beach, which would be constructed using a combination of cut and cover and pipe jacking technology.

"The drainage channels and ditches would be constructed during regular working hours with limited impact to railroad operations," said Haggerty. "The repair of drainage features at the end of the city streets, would include access from the roadways, adjacent to homes and businesses. Construction of components on the beach would be completed during regular day time hours independent of train operations but should avoid the summer months."

Phase 6, expected to cost approximately $35 million, will cover the area from Coast Boulevard to the Torrey Pines Overhead Bridge in the city of Del Mar (1.6 mi.).

"It will continue to provide long-term rehabilitation and stabilization work, including protecting the base of the bluffs against additional bluff retreat," said Haggerty, "and simultaneously ensure the long-term viability of the corridor."

SANDAG has initiated a $3.2 million study to evaluate alternative strategies to move the tracks completely off the bluffs. CEG