Crews, Then Cubs, Take the Field at Wrigley

The latest updates on the 1060 project as the Spring season opens for the Chicago Cub. 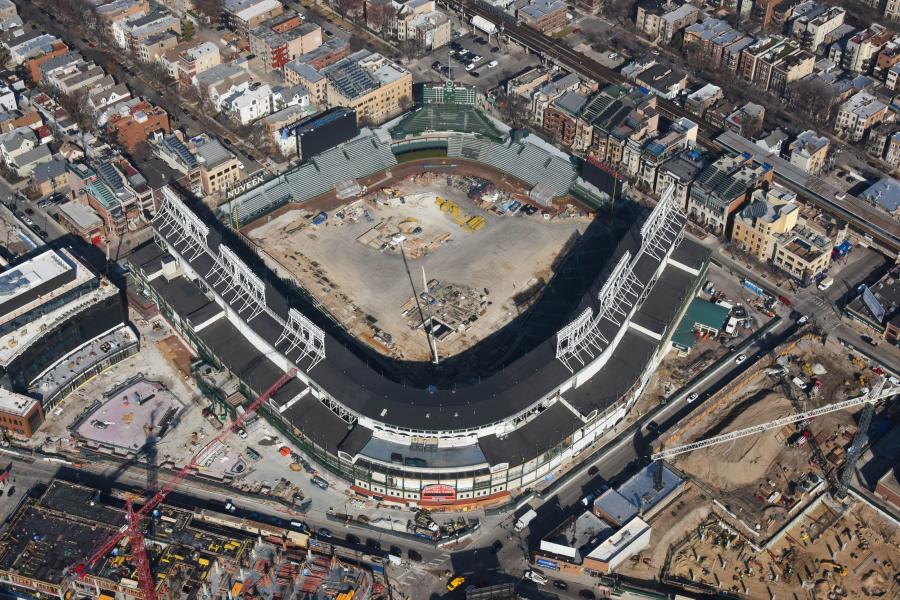 Curtis Waltz, aerialscapes.com photo As the Chicago Cubs get ready to take the field for the first pitch of the 2017 season, the 1060 Project, a multi-year, $750-million renovation project of Wrigley Field, is in its seventh-inning stretch.

As the Chicago Cubs get ready to take the field for the first pitch of the 2017 season, the 1060 Project, a multi-year, $750-million renovation project of Wrigley Field, is in its seventh-inning stretch.

According to the 1060 Project website, the work includes structural upgrades, improved player facilities, new fan amenities, outfield signage, two video boards, new premier clubs, expanded concessions, new and improved restroom facilities and more. The project, which has been under way since 2014, is being completed in four phases with its final phase taking place in 2018. The majority of work has been is being performed during the team's offseason.

Also under construction is a mixed-use development adjacent to Wrigley Field. The development will feature two new buildings — the new home of the Chicago Cubs and as well as the American Airlines conference center. The second building will include Hotel Zachary and mixed-retail locations, according to Hickory Street Capital (HSC), a real estate development company.

During this past offseason, crews completed a variety of tasks, including the home and visiting teams' bullpen relocation, new seating area in the bullpens' former location, visiting team batting tunnel, partial façade restoration on Addison street, structural improvements in right field, continued terrace reserved seating replacement and replacement of seats behind home plate, according to the 1060 website.

Minor work also is being completed during the Cub's 2017 season, including the American Airline 1914 Club, concession improvements, replacement seating in various locations, office building and plaza and the hotel. However, before these improvements could be made, reinforcing the foundation was necessary to accommodate the new additions.

Pepper Construction took the field for this work. The company was involved with shoring up the foundations on both Wrigley Field, as well as the clubhouse and plaza building. For the field, the company was dealing with sandy soil, and the bedrock, which was 75 ft. down. To shore up the foundation, Pepper Construction not only restored columns that supported the ballpark, but also installed 213 micropiles throughout the ballpark, according to the company's website.

Brian Peter, Pepper Construction project executive, said the company used a top-down construction method for the clubhouse and the office building adjacent to the Wrigley Field structure. He said in a video on the company's website that it is an effective building strategy, especially in an urban setting with limited space on the job site.

"It allows you to build your structure literally from the grade level at the top going down into the earth," said Peter. "At the same time you are doing that, it provides an added benefit of allowing you to erect your structure going up. It saves money in the earth retention system that we utilized in order to dig the basement structure, and it provided the least impact on the adjacent stadium, so that the baseball season would be uninterrupted during our work."

A number of other contractors are involved with the 1060 project, including VOA, ICON Venue Group and D'Agostino Izzo Quirk Architects (DAIQ).

As construction continues, project officials have pointed to a number of benefits of the 1060 Project. While none of the $750 million for the project came from taxpayers' pockets, officials estimate that the park will generate an additional $19 million in new tax revenue in addition to the $81 million Wrigley Field generates already in tax revenue every year. In addition, they also predict that the job will create 2,100 jobs. —CEG

For more information on the 1060 project, visit www.pepperconstruction.com.