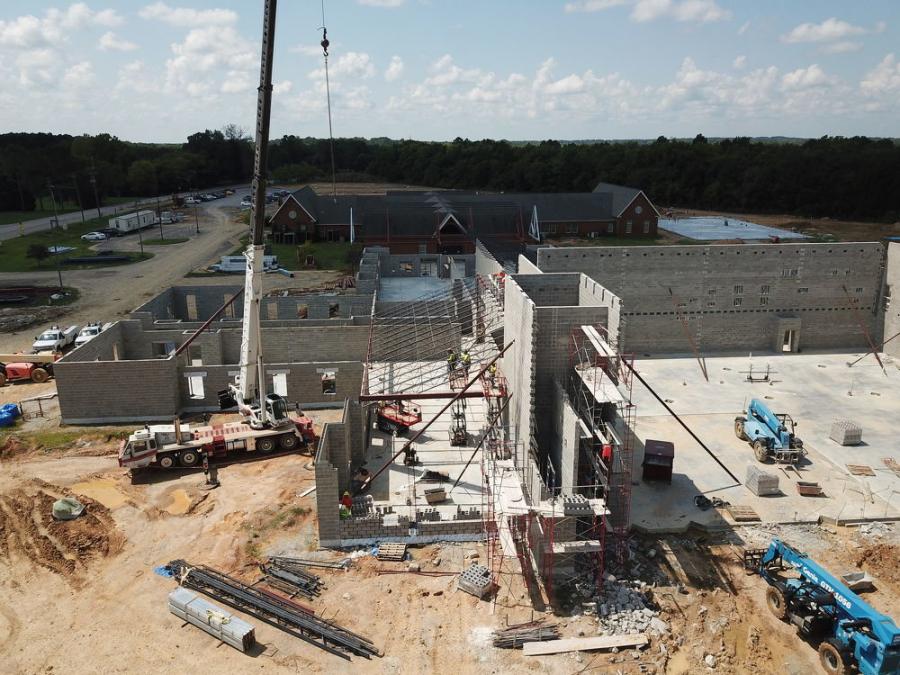 For years, educators have dreamed of building a facility that would fully meet the needs of gifted students in Montgomery, Ala.

That vision has finally been realized, as crews work to complete the new Booker T. Washington Magnet High School (BTW). 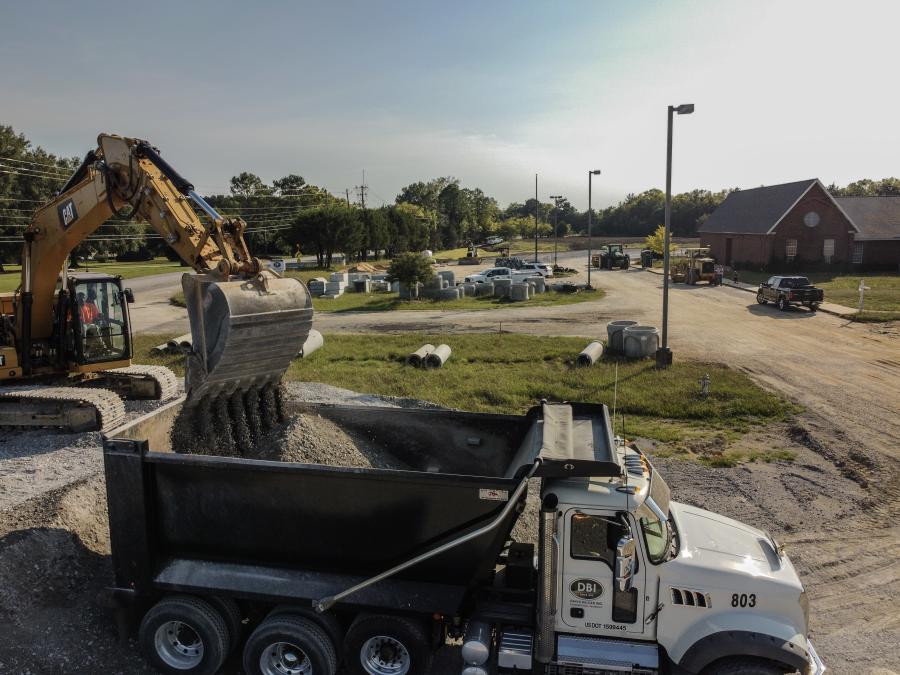 "The existing structure had a fire, and one of the main buildings was a total loss," said Chad Anderson, the executive director of operations of Montgomery public schools. "Their current location is an old elementary school that does not support a magnet arts program."

The current enrollment for BTW is approximately 450 students.

"This is a magnet arts school that has programming such as dance, theatre, music that includes piano, strings, choral and band, visual arts, photography, law, television and radio and volleyball, basketball and soccer," said Anderson. "There is a fully functioning television and radio studio, a black box theatre that seats approximately 125, a mock courtroom, a photography dark room, a 1,000-seat gymnasium and an athletic field."

Work began in February 2021, with completion scheduled for June 2022. The approximately 120,000-sq.-ft. project will cost $26 million, including upgrading an existing structure at the former Holy Cross Episcopal School site, where the new school will be situated.

"The location and the cost of acquiring the property and existing structure was a very economical and appropriate decision, that fully met the needs of the school," said Anderson. "We used the existing architectural design and kept the same theme across the road front visual. As the need for more high-volume ceilings occurred in the programming, we were able to incorporate a more modern visual down the sides of the building."

Anderson said that designing the new school was a much easier process, because of time and effort already invested.

"Fortunately, the architect had completed programming with the school a few years prior to the fire and was able to update the existing programming very quickly. In all, the planning was approximately four to six months, with a construction contract in place at eight to nine months."

The unfortunate blaze in 2018 had a silver lining in that new construction will better serve student needs.

"Most definitely, this will be a definite bright spot for the school system and will propel BTW to new heights in the academics and arts of the school," said Anderson.

Currently, students are attending classes at the former Hayneville Road Elementary School. Reaction to construction at the new site has been extremely positive.

"There has been a tremendous amount of curiosity, anticipation and excitement," said Anderson. "The buildings are really taking shape, and the school community is eager to enter the new location. This structure will bring new life to an area that hasn't seen a lot of development over the past 20 years."

He added that the new campus will provide opportunities for the students and staff at BTW that have not existed in the program's history, with plans for expansion, should the need arise to house more students.

"Also, there is a plan for a full performing arts facility that can hopefully be addressed once the critical needs around the district are taken care of. Currently, we are in the process of a district-wide facility audit, which will be concluded by a district-wide capital plan to kick off sometime in the new year. Our hope is that this project will be the catalyst for great things throughout the district." 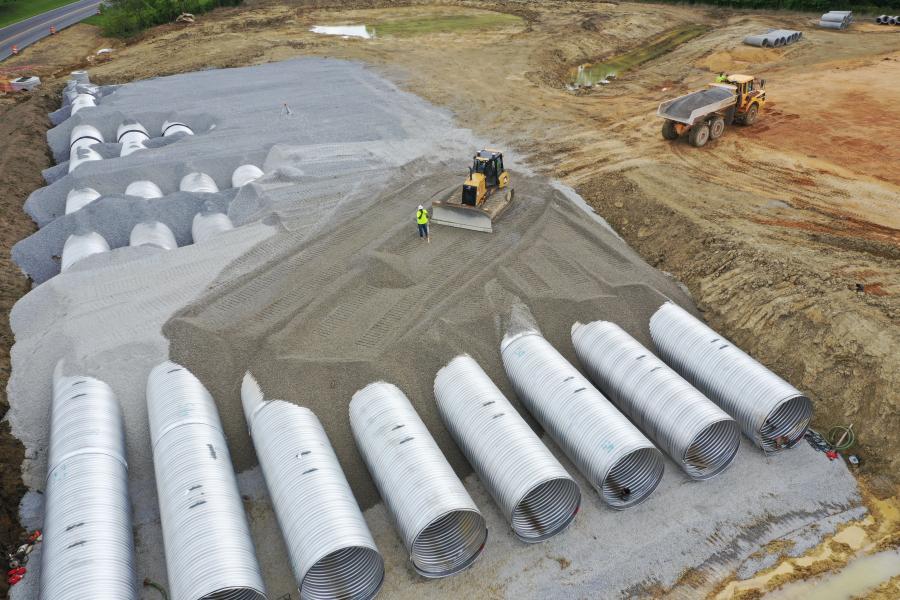 Anderson said the length of the project has been the biggest challenge.

"With insurance money having a time requirement, it has been difficult to have that portion completed in the allotted time."

Due to the soil conditions, the slab areas were excavated and better soil was filled in those areas. Most of the excavated soil was utilized on the site. The project calls for 61,300 cu. yds. total unclassified excavation, 12,500 cu. yds. total offsite waste material and 21,100 cu. yds. imported engineered fill for undercuts at the buildings.

The completion of the underground retainage has been the most challenging piece completed so far, and by the end of September, all the building slabs will be completed. Construction crews have yet to finish the athletics slab, the CMU walls and brick masonry. Work remains on the roof, mechanical systems and interiors, while renovation of the existing building requires HVAC, electrical, lighting, roof, paint, flooring, the creation of science labs and expansion of the library.

Classroom construction involves electrical load and finishing for specific programming. Audio/visual consultants provided expertise to the architects to design the black box theatre's acoustics, with faculty providing input as to how the structure will be utilized. It has high-volume ceilings with the main purpose of instruction in the arts, but can be used to stage small performances with a crowd capacity of roughly 125.

Main equipment required on the project includes lulls to move masonry, earthmovers, concrete trucks and masonry tools, Caterpillar backhoes and dozers, cranes for metal work and scaffolding for masonry. Concrete, block masonry, brick and structural metal are among the chief materials being used.

Anderson said the elements have been a concern for crews.

"There has been a tremendous amount of rain this winter, spring and summer. The winter weather slowed the site work, but the contractor has been able to maintain his schedule through the warmer months."

Anderson also noted that the existing site was somewhat prepared for expansion.

"Holy Cross had plans to expand the site, but could not justify the expansion. We also purchased some adjacent property where the soccer field is being located, and this is where much of the extra dirt was moved."

For BTW principal Quesha Starks, the project is long overdue, but well worth the wait.

"BTW Magnet High School is known for overcoming challenges, including having limited access to facilities that other performing arts schools have on site. For years, BTW has led creative excellence with leaking ceilings in dance studios requiring dancers to navigate around trash cans filled with water. We've raised funds to rent facilities to present annual talent showcases in community venues due to the lack of a performing arts center, and relied on community stakeholders, including the BTW FAME Foundation, to advocate for students and programs. 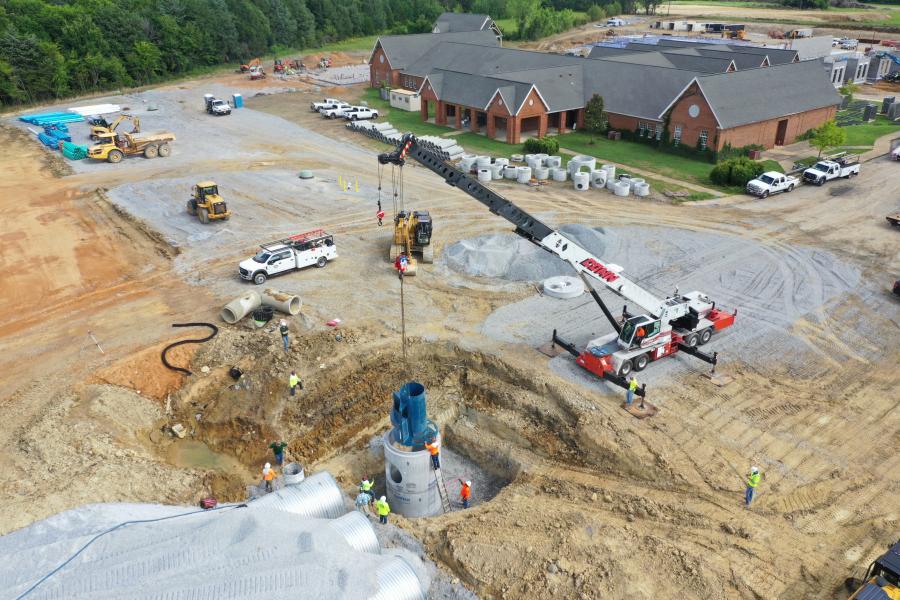 "The BTW fire was a tragic moment in our school's history; however, the love that people around the nation demonstrated and our move to a more adequate facility demonstrate that our perseverance through challenges and difficulties has produced a remarkable return. We will not only be able to serve our students, but also students in our city and state who will have access to our school. We are not moving to our campus alone. We are taking the community with us."

Starks said the construction site has brought tears to her eyes.

"I became principal of BTW 18 years ago and prayed and hoped that one day we would move to a facility that would reflect the talents of our faculty, students and alumni. The vision has come to fruition, and every day that I am on the construction site, I remember my mother's words: ‘You will see your vision of a new school during your leadership; do not ever lose sight of the vision.'"

As for the eventual transfer to the new campus, Starks welcomed the hard work ahead.

"BTW has mastered working under pressure. Just as the community embraced us following the fire, we know that the community will return to help us relocate. Montgomery, Alabama, has a way of coming together to make a positive difference under challenging circumstances." CEG