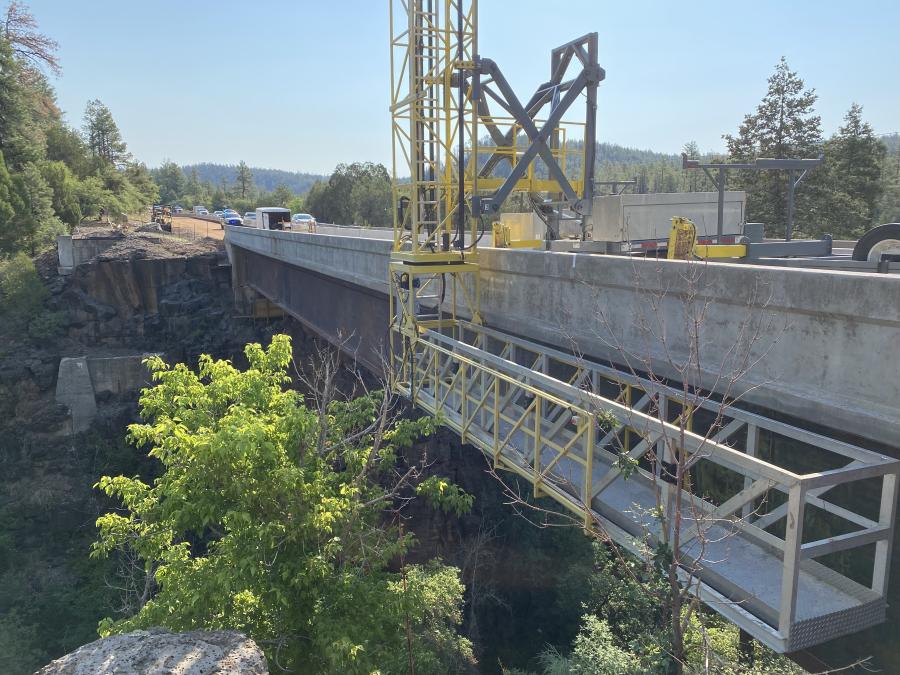 Officials from the Arizona Department of Transportation are in the process of replacing the current bridge deck with reinforced 8-in. thick concrete and to replace deck drains, deck joints and bridge barrier transitions, among a host of other improvements.

On State Route 73 in the Fort Apache Reservation, alongside the North Fork White River, ADOT is in the process of replacing an old bridge deck.

By the standards of the region, the Post Office Canyon Bridge, built in 1968, isn't quite a senior citizen at 53 years. But if it could talk, it would tell you the top song that year was "Hey Jude," by The Beatles, minimum wage was $1.60 an hour and a Big Mac was 49 cents.

By ADOT engineering measurements, the bridge is safe, but because ADOT specifications and standards have evolved, it's time to replace the current deck with reinforced concrete 8-in. thick and to replace deck drains, deck joints and bridge barrier transitions, among a host of other improvements. The project will reconstruct and significantly extend the life of the bridge.

The project is in full swing and crews are demolishing and replacing the old decks.

When residents cross the newly refurbished span, they now know they will be 1 mi. high, on the White River Scenic Road and a Rural Major Collector Road — and on a passage whose history began in the 1800s.

According to the project website, the following restrictions are in place from 6 a.m. to 6 p.m. seven days a week through September:

It is located nearly half-way down an 11-mi. stretch of SR 73, between Indian Pine near State Route 260 and the Alchesay National Fish Hatchery, that was designated in 1993 as the White River Scenic Road. The route is a U-shaped loop, about 40-mil. long with one end on U.S. 60 north of Carrizo and the other near Indian Pine and State Route 260.

According to the state-published Arizona Memory Project, SR 73 started out as little more than a foot trail:

"With the establishment of a military camp in 1870 that would be renamed Fort Apache in 1879, the development of rough trails into passable packed-earth roads became necessary. In 1929, the old trail that would become SR 73 allowed horse-riding soldiers and mule-drawn freight wagons to reach the remote garrison from both the north and the south."

Before 1968, an earlier bridge across the canyon had a deck built from timber, Viboolmate said. It was torn down to make way for the current bridge.

"It was an open design," he said. "Driving on it you could see side rails and cross rails."

Located in Navajo County between mileposts 348 and 349, the bridge sits on a section of SR 73 that is classified as a Rural Major Collector Road.

"It connects to local communities, including Fort Apache, Whiteriver and Cedar Creek," Viboolmate said. "It connects State Route 260 and U.S. 60."