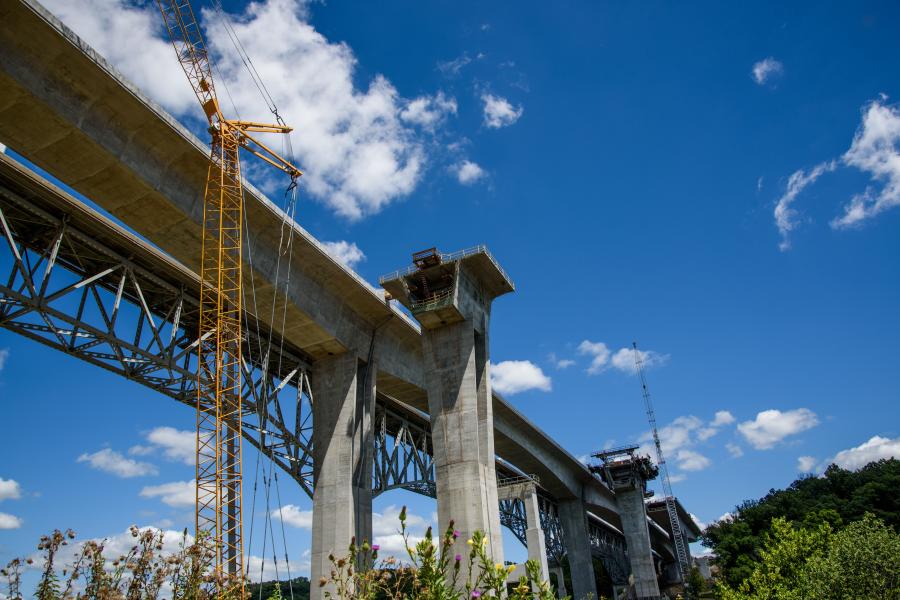 Only minor work remains to complete an $88 million project on the Jeremiah Morrow Bridge in Warren County, Ohio.

Only minor work remains to complete an $88 million project on the Jeremiah Morrow Bridge in Warren County, Ohio. A ribbon-cutting ceremony was held on Nov. 18, to commemorate the completion of the project's major workload.

“The new structures will help to keep people safe and commerce moving in Ohio,” said Jerry Wray Ohio Department of Transportation (ODOT) director. “They will serve the people for several decades.”

The new bridges will carry two lanes in each direction across the Little Miami Valley, but reportedly have room to add a third lane in the future. Construction on the project began in August, 2010.

The project is located between Columbus and Cincinnati and replaces the high level bridges on Interstate 71 just outside Wilmington. The existing deck truss bridges were replaced with a concrete cast-in-place segmental box structure using the balanced cantilever method of construction.

The twin spans are named after Jeremiah Morrow, who served as a state senator, Ohio's first U.S. representative, a U.S. senator, and an Ohio governor between 1803 and 1842.

The northbound replacement span opened to traffic on Nov. 20, 2013. This first phase took three years to complete. The new bridge is reportedly designed for so-called super loads, unlike the old structure.

Kokosing was awarded the project to reconstruct the Jeremiah Morrow Bridge in June of 2010. The project consists of replacing the existing bridge and replacing/realigning I-71 on both sides of the bridge. The project will be constructed in five phases. The total project length is 1.9 mi. (3 km). The project has 9.9 million lbs. (4.4 million kg) of reinforcing steel, 2.2 million lbs. (997,000 kg) of post tensioning steel, and 1,400 linear ft. (426 m) of drilled shafts.

Funding for the project is from state and federal gas tax allocation.

According to Brian Cunningham, communications manager of ODOT District 8, the contract calls for construction of two new bridges to replace the two existing bridges built in 1965 in essentially the same Little Miami River Valley footprint.

“The new bridges are cast-in-place, post tensioned structures and were built using the balanced cantilever method,” he said. “The new bridges have been designed for three lanes of traffic on each structure, but will consist of two travel lanes and a shoulder on each until widening of I-71 to three lanes is necessary in the future.”

According to Cunningham, the main challenge was making sure debris did not fall into the Little Miami River — a state scenic river.

“A single concrete footing with reinforcing weighs approximately 2.8 million pounds, equal to about 170 elephants,” Cunningham said. “To match the weight of all the bridge's footings, you would need about 188,829 people — three times the capacity of Paul Brown Stadium where the Cincinnati Bengals play. If a concrete column were built to the dimension of a piece of paper, it would have to be 383 miles tall to equal the amount of concrete in the Jeremiah Morrow Bridges.

Scott Cambell serves as the design engineer. Reinforcement steel placement was by J & B Steel Erectors Inc. and the concrete supplier was Spurlino Materials. CEG