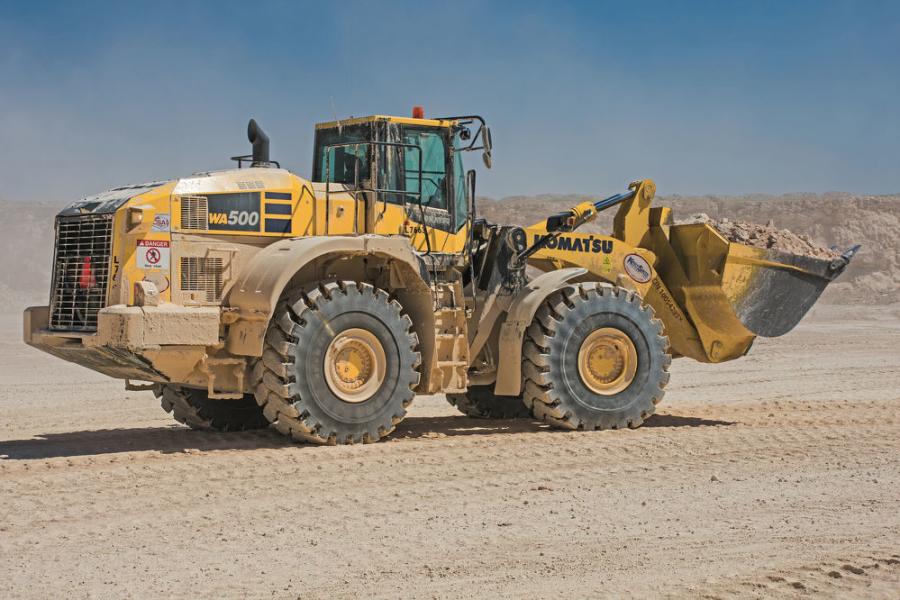 An operator from CSA Materials (a sister company to Reece Albert Inc.) moves material with a Komatsu WA500-8 yard loader. “Our operators like the smooth ride, ease of the controls and the cab comfort,” said Reece Albert Inc. Equipment Manager Daniel Rowzee.

When a tire manufacturer wants a test track built, it doesn't hire just any paving company to do the job. The parameters and specifications are rigorous and exacting, and few contractors can complete the challenge once, let alone multiple times.

“In essence, we are building a laboratory, and it's like playing the Super Bowl and the World Series at the same time,” emphasized Rob McNew, vice president-midland operations of Reece Albert Inc. “In some cases, we have to develop an asphalt mix design and ship in specialty aggregates. Everything has to be perfect in a very imperfect world, so it's excruciatingly demanding, but also very rewarding.”

Reece Albert Inc. has been on the right track for nearly 80 years, since Reece Albert founded the firm in 1940 with one truck, a tractor and a small blade. The company flourished and became one of Texas' most highly respected paving and earthwork contractors. It serves the state from locations in San Angelo and Midland.

“Our capabilities run from constructing driveways to highways,” stated President Roger Albert, Reece's son and part of a second generation at the helm of Reece Albert Inc. His cousin, Lon, is vice president of operations. “In addition to asphalt, we do concrete work for roads, sidewalks, curb and gutter, culverts, bridge decks and more. We are one of few companies that offers roller-compacted concrete.”

Throughout the years, several family members have been involved in the company, including Reece's nephew, Jack, who became the president in the late 1960s when Reece retired. Jack oversaw the company for nearly five decades before handing it off to Roger six years ago, who joined the company full time in 1975. Together, Jack and Roger ushered in a new era for the organization.

“The first 30 years our focus was mainly on private commercial projects, but those started drying up around San Angelo,” explained Roger. “We could either close or move into new markets, so we started doing highway work, and that's been approximately 70 percent of our total business ever since.”

In the mid-1970s, the Alberts opened their first quarry. They have since added a dozen more, and all are operated by a sister company, CSA (Crushed Stone & Asphalt) Materials. It produces nearly 20 products, including commercial, city, Texas Department of Transportation (TxDOT) road base, bedding rock and hot mix asphalt. In addition to supplying Reece Albert, Inc., CSA Materials sells to outside contractors.

“There wasn't much TxDOT work around here in the early 1970s, so the major quarry companies pretty much ignored the area,” said Roger. “We started crushing in 1975 and have done it ever since. Having a dedicated source of materials helps us better control a project as well as the quality. The state highway jobs eventually picked up through the years, so that enabled us to grow and add locations. We also supply a fair amount of aggregate to the West Texas energy sector.”

Additional expansion began about 20 years ago when the Alberts decided to look beyond San Angelo. The Midland-Odessa marketplace seemed solid, so Jack and Roger studied the area carefully.

“The decision to move into that market became an easy one,” Roger said. “A dirt contractor wanted to sell and approached us about buying him out. We did, and the purchase came with almost 60 employees. That gave us the ability to largely self-perform nearly every aspect of a project. We can provide full site packages that include clearing; mass excavation; subgrade prep; installation of water, sewer and storm utilities; and finish grading. Very little is subcontracted and what is, goes to highly regarded companies that we trust.”

Rowzee and Wright collaborate in evaluating the two companies' fleets and deciding whether repairs or replacements are necessary. They consider life-cycle costs, age of equipment, hours and other factors.

“If we believe a machine still has a lot of life left, refurbishing it is a viable option,” said Rowzee. “But, when the upkeep and maintenance cost us considerable time and money, getting a new machine makes sense. It's a balancing act and not always a quick, easy decision.”

“Our maintenance and repair history with Wirtgen products is outstanding,” said Wright. “They are very productive, and we have varying sizes because our work is so diverse. Mainline paving is done with the 5203s, while the 5103 is great for shoulders. If we have a roller-compacted concrete job, the 2100 handles that. All of our Wirtgen products are highly productive, and just as important, don't cost us considerable downtime.”

About a year ago, the organization began adding Komatsu WA500-8 yard loaders with 7.5-yd. buckets to the CSA Materials locations, using them to feed crushers and load trucks. As with some of the Wirtgen Group purchases, Reece Albert Inc. called on Kirby-Smith Machinery Territory Manager Todd Coffey to acquire the loaders.

“Our operators like the smooth ride, ease of the controls and the cab comfort,” detailed Rowzee. “We appreciate the fuel efficiency. For example, in one quarry where we also have a competitive loader of the same size, the Komatsu loader burns about 20 gallons less fuel per day. It's saving us a couple thousand a month; and when you project that across the board, the numbers add up pretty favorably.”

Reece Albert Inc. and Kirby-Smith Machinery have a close relationship. Personnel from the two companies meet occasionally to discuss equipment performance, maintenance items and other needs.

“Todd and Kirby-Smith have become more than a rep and a dealer. We consider them partners,” said Wright. “They have done an excellent job the last couple of years of ensuring that we have the right equipment and proper support to back it. I can call anytime and know that if we have an issue, they will make it a priority to fix it. Kirby-Smith is excellent about having parts on hand or getting them quickly, if needed.”

The Alberts have a controlled-growth business philosophy. Roger said that mindset has helped maintain the firm's stability and proven to be a path to success.

“Diversity has been another key,” he said. “We moved into other markets to survive, and those moves paid off. West Texas has grown considerably during the past few years, and that benefited us, too. TxDOT has invested more in this area, so there has been plenty of work. Of course, that brought additional competition, so we have had to sharpen our pencils a little more, but we continue to progress.

“And, we have built great relationships with our customers,” Roger added. “Many of them use us exclusively, and I think that says a lot about us as a company. I believe that if we keep the same approach, we will be around a good while longer."