DDI Construction at Camp Creek Parkway, I-285 in Fulton County 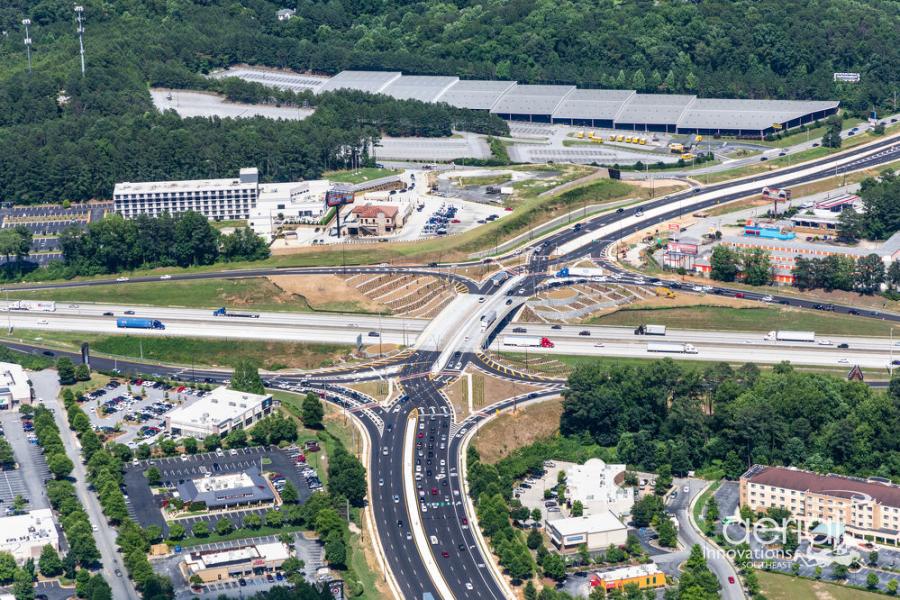 CMES Inc. constructed its first diverging diamond interchange (DDI) as part of the Georgia Department of Transportation's $13 million Camp Creek Parkway (SR 6) project at I-285 in the city of East Point (Fulton County), an initiative that began on July 6, 2018, to help reduce congestion and improve safety for motorists.

"The project addressed increasing traffic by improving traffic flow and mobility, will help to reduce the number of traffic incidents and will provide a distinctive gateway for the area," said Tori Brown, district communications officer, GDOT District 7 of the Metro Atlanta Office. "This was the seventh DDI constructed in Georgia. Traffic analysis had shown increasing numbers of crashes and routine traffic congestion at the interchange. 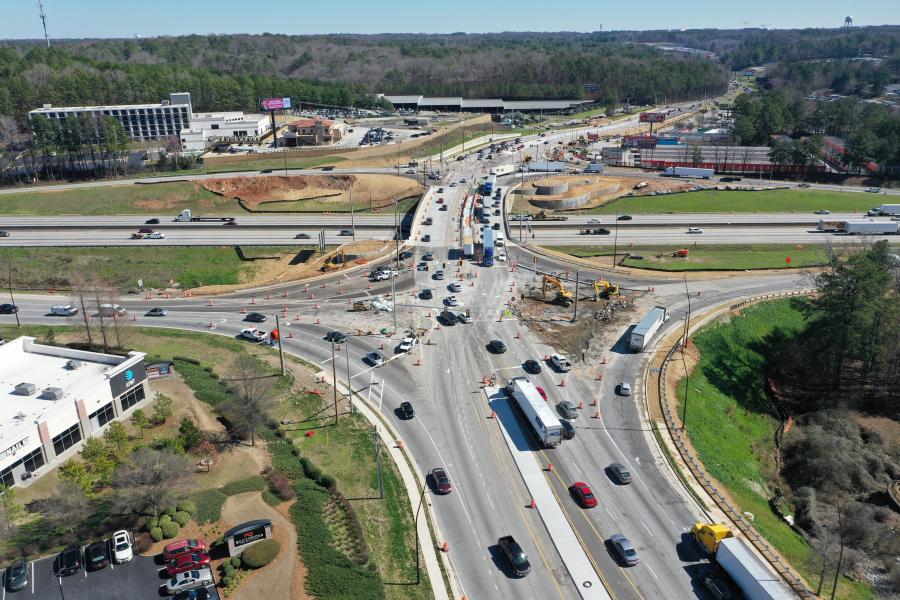 "Improvements for this interchange were identified and evaluated by GDOT's Office of Traffic Operations, as well as the Office of Planning through its Metro Atlanta Operational Planning Study, which found that both of the I-285 off-ramps to SR 6 tend to back up onto I-285 during the peak period," she added. "In addition, the DDI was designed with truck and tractor-trailer traffic in mind — cars and trucks will move through the DDI more efficiently. Dedicated pedestrian walkways now provide safer access through the DDI."

All four intersections were signalized prior to construction. The SR 6/Camp Creek Parkway was a four-lane principal arterial with shoulders and a median; the bridge over I-285 was six lanes wide, including two travel lanes and one left turn lane in each direction; and I-285 was an eight-lane urban interstate principal arterial with rural shoulders and barrier separated median.

The DDI altered the configuration by reconstructing the outside shoulder on both sides and adds 7 ft. to the north side of the bridge deck, widening the 12-ft. lane widths to 13 ft., reducing the outside shoulder from 6 ft. to 2 ft. and the addition of a 2 ft. inside shoulder. The project has also added an 11-ft. barrier separated pedestrian walkway down the middle of the bridge. Other elements included: the installation of $2 million worth of traffic signal systems and lighting — 42 50-ft. tall decorative lighting poles, three traffic signals and 39 in-ground LED lights; two circular decorative stonewall aesthetic features with landscaping and landscaped areas; and the installation of drainage infrastructure, including box culvert shoring.

The new infrastructure was designed by GDOT's Office of Roadway Design.

Daniel Hudson, CMES's division manager for structures and concrete, oversaw the retaining wall construction, the box culvert construction for drainage improvement and the shoring system to tie-in the new culvert to the existing box culvert.

"The work went very smoothly," he said. "Our first plan of attack was to build the site retaining walls and we used a gangform system with a rock textured formliner to give the aesthetic of a rock surface. We had to make sure that we lined up all the joints for the rock patterns to match. We were on it for several months and there were numerous walls. Some of the complications were that walls were radius and as such, we had to build radius forms using articulate radius whalers. It takes a degree of skill for the workmen to assemble the form system and to build the walls according to the plan. 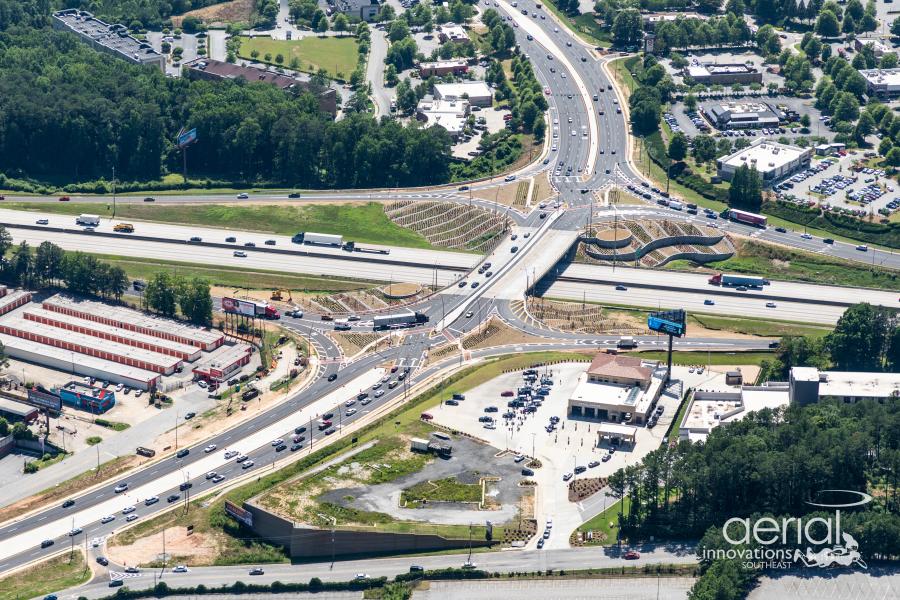 "After the walls had been formed, poured and constructed, then there was finishing that had to occure for the color coating and sealing that gives it its final aesthetic," he added, pointing that a Komatsu PC238 trackhoe was essential for the progress. "We began the wall forming operations with a EFFCO steel plate radius form system and then we switched to an articulating steel whaler aluminum beam plywood gangform system, utilizing taper ties. We started out by renting the EFFCO system and then purchased our equipment to save money, using it for most of the work."

The equipment for this aspect of construction was rented from EFFCO directly and purchased from, Formwork-Shoreall of Temple, Ga.

The box culvert work was not easy.

"It was two stage process and we had to build the outlet end first and work our way to the tie-in connection located at Camp Creek Parkway," said Hudson. "The complication was that it was a very deep excavation adjacent to live traffic and the problem is that you surcharge loads. We looked into multiple systems to come up with most feasible and cost-effective means and methods to complete the work. There were several systems available in the market placece to address shoring needs and concerns, and we wound up going with a sliderail system that came from Trench Shoring. It worked well because we started the construction at the outlet end of the new effluent on the new culvert and progressed towards the influent tie-end portion that enabled us to place fill on top of the new culvert, which allowed us to use the sliderail system effectively."

For the decorative features and landscaped areas, painted stones were placed along the terraced walls. CEG