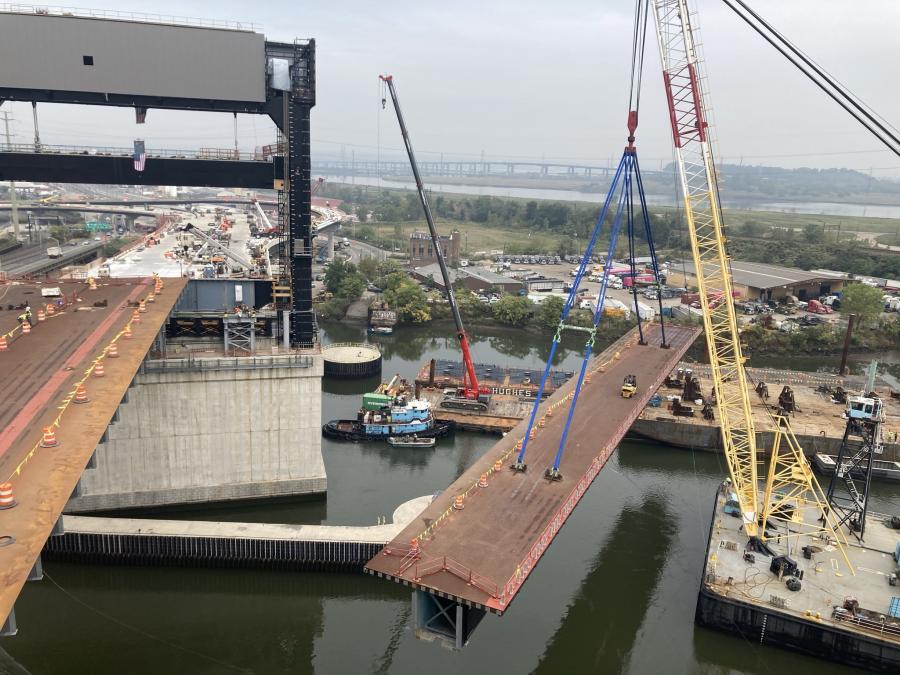 Cranes are playing an essential role in the bridge reconstruction project. Here one lifts a prefabricated deck.

The New Jersey Department of Transportation (NJDOT) is replacing the Route 7/Wittpenn Bridge over the Hackensack River at a cost of $495 million, with the goal of having the new bridge completed in early 2023. The bridge links Jersey City on the east side to the town of Kearny on the west side (Hudson County). 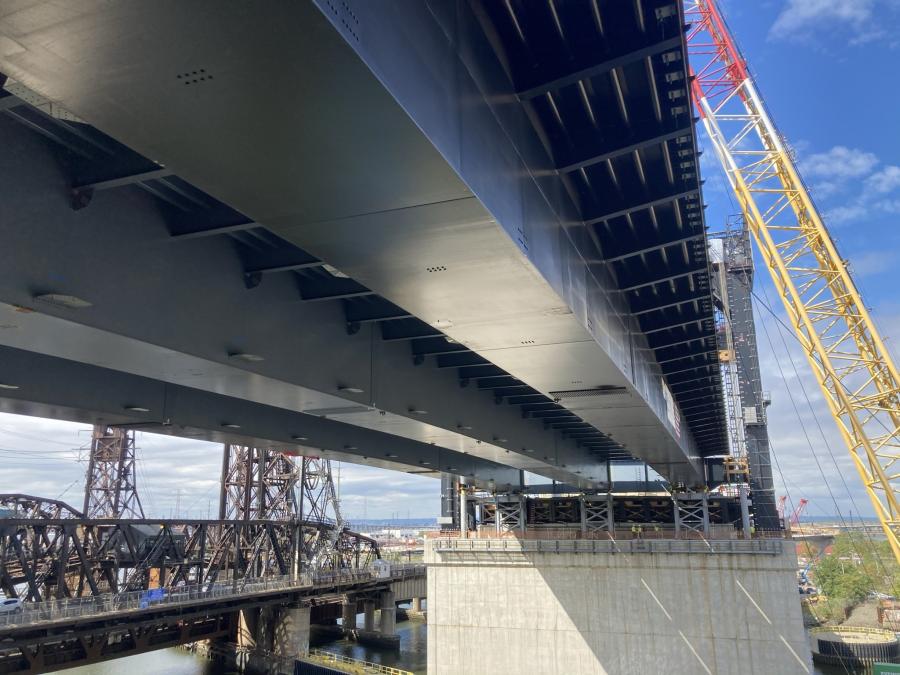 The construction began in November 2011, and in late September 2020 CCA Civil Inc. installed a unique bridge deck — an orthotropic deck — for the vertical lift span that is 324 ft. long. The project is being financed by federal funds and the Lincoln Tunnel Access Program.

An orthotropic deck is a lightweight design that has a thin steel plate and a series of ribs and floor beams that is similar to U.S. battleship decks.

"This marked a major milestone in the construction of a new vertical lift bridge to replace the existing bridge," said Brian Ahrens, an NJDOT public information officer. "The project is completely replacing the existing bridge with a new, wider vertical lift bridge doubling the vertical clearance over Hackensack River from 35-feet to 70-feet. This will result in fewer openings and less congestion."

The deck, constructed in three sections, was lifted in place over three days — one section per day — using one of the largest crane barges in the country. Crews then bolted steel connectors to join the three deck sections, along with the end floor beams, to make one complete lift span unit. The new deck will be connected to the lift span cables in March.

"This is the first time this innovative type of deck has been used in New Jersey," said Ahrens. "It was manufactured by Vigor LLC at its facilities in Clackamas, Oregon, and Vancouver, Washington, and was transported to New Jersey through the Panama Canal."

The ship carrying the deck left Astoria, Wash., on June 6, 2017, and arrived in Kearny/Jersey City on July 14.

The Wittpenn Bridge also serves as a major connector between Routes 139 and 1&9 Truck (1&9T) to the east, and the New Jersey Turnpike Interchange 15W and Newark/Jersey City Turnpike to the west. 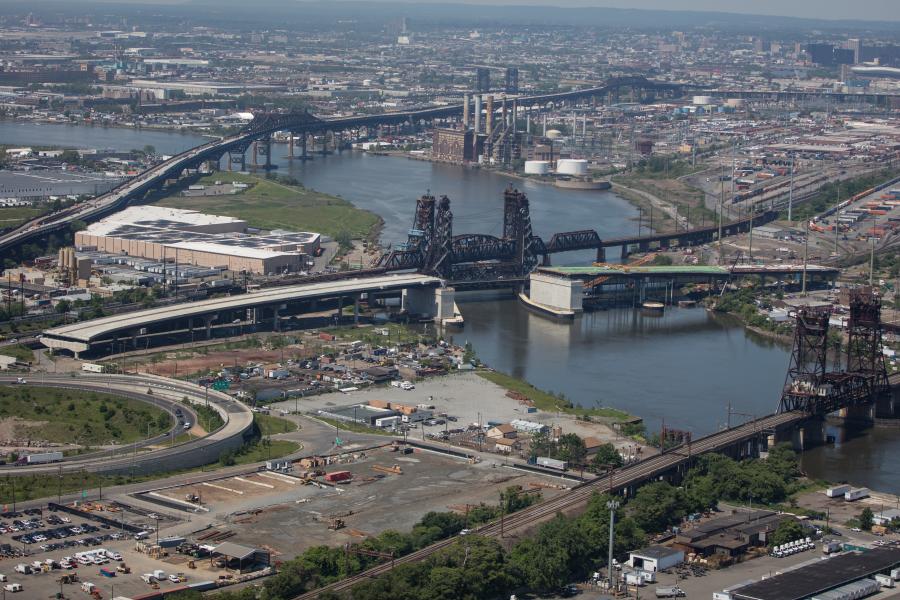 "Route 7 is a key component of NJDOT's Portway Corridor, allowing traffic from the west to gain access to the Holland Tunnel and New York City, as well as business and industrial areas within Jersey City," said Ahrens. "Route 7 also serves as a main trucking route that provides for the movement of people and goods between the New York Metropolitan area and the greater area of Kearny and the Meadowlands.

"The improvements within this project will strengthen access to and between the Newark-Elizabeth Air/Seaport Complex, intermodal rail facilities, trucking and warehousing/transfer facilities, and the regional surface transportation system. These facilities and their access routes are the front door to global and domestic commerce for New Jersey and the greater metropolitan New York region."

The original vertical lift bridge, built in 1930, is 2,169 ft. long with 14 deck-girder spans and three through-truss approach spans, two tower spans and a 209-ft. vertical lift main span. It has four 10-ft. wide travel lanes (two eastbound and westbound), but does not have any shoulders or a median separating the traffic.

The new structure, 200 ft. north of the existing structure, is 3,277 ft. long, with a 324-ft. vertical lift span. It will have two 12-ft. through lanes, a 12-ft. auxiliary lane, and an 8 to 10 ft. right shoulder in each direction, as well as a 6 ft. sidewalk along the eastbound roadway. An 8 ft. median consisting of variable width inside shoulders and a median barrier will separate opposing traffic flows.

"It will accommodate pedestrian and bicycle traffic," said Ahrens.

The work also includes the realignment of Fish House Road on the west side of the river.

Jacobs Engineering designed the project that is replacing the structurally deficient bridge.

"The new bridge will meet current design criteria and improve traffic operation and safety," said Ahrens, "as well as improving traffic service for the region, increasing vertical clearance over the river in the closed position to reduce vehicular and marine traffic conflicts, and reduce maintenance and lifecycle costs and traffic disruptions."

The advantages of the bridge design outweighed the cons.

"Prefabricated in a shop, it results in faster construction and higher quality control," said Ahrens. "It's lightweight, which is a critical characteristic for movable bridges, and this makes it more efficient and allows for faster operation. It also allows for longer span lengths, which provides a better riding surface than others since it contains less connections; and corrosion resistance has historically been very good, partially from wearing surface and closed ribs." 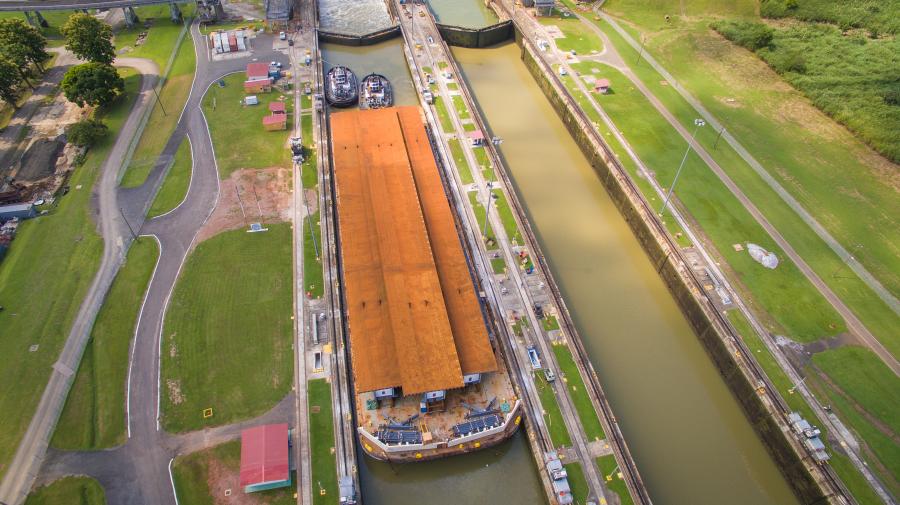 Using prefabricated parts eliminates the need for the concrete to cure, thus allowing work to be done in colder weather.

NJDOT, with the assistance of Lehigh University, conducted research for the design that found that "orthotropic decks are the only deck that can achieve a 100-year design life." In addition, the researchers looked at prototypes for this deck, examining three different connection options, overall successful performance, and critical stresses and load distribution.

Contract 1, awarded to Conti Enterprises Inc., was completed in December 2014, and dealt with the construction of the river piers, including Pier 1E, 1W and 2W and the pier protection system on each side of the channel, as well as a dolphin in front of Pier 2W and a fender system.

This system consists of 73 eight ft. diameter drilled shafts that are anchored into rock. All the piers and the cap of the pier protection system are reinforced concrete.

Contract 2, awarded to Union Paving & Construction Co. Inc. and completed in January 2016, saw the construction of off-line portions of the new bridge on the Jersey City side; Piers 2E, 3E, 4E, 6E, 7E and 8E; superstructure for Units 4, 5 and 6; the base supports for sign structures Numbers 4, 5 and 6; the barrier gate and warning gate supports; and various utility relocations to accommodate the new bridge and roadway alignment.

Contract 3A was awarded in May 2016 to Union Paving & Construction and completed in 2019. This covered the construction of pump station, surcharge, detention basin, pipe jacking und rail lines, outfall on Kearny side, the surcharge for the Fish House Road abutments and reconstruction of a portion of the road.

CCA Civil was awarded Contract 3 in January 2015 and it will be delivered it this fall. It is building the new vertical lift span, the lift span towers on the piers constructed in Contract 1 and the Kearny approach, and piers 3W, 4W and 5W; the superstructure for Units 2 and 3; the base supports for Sign Structures Number 3; and the barrier gate and warning gate support. 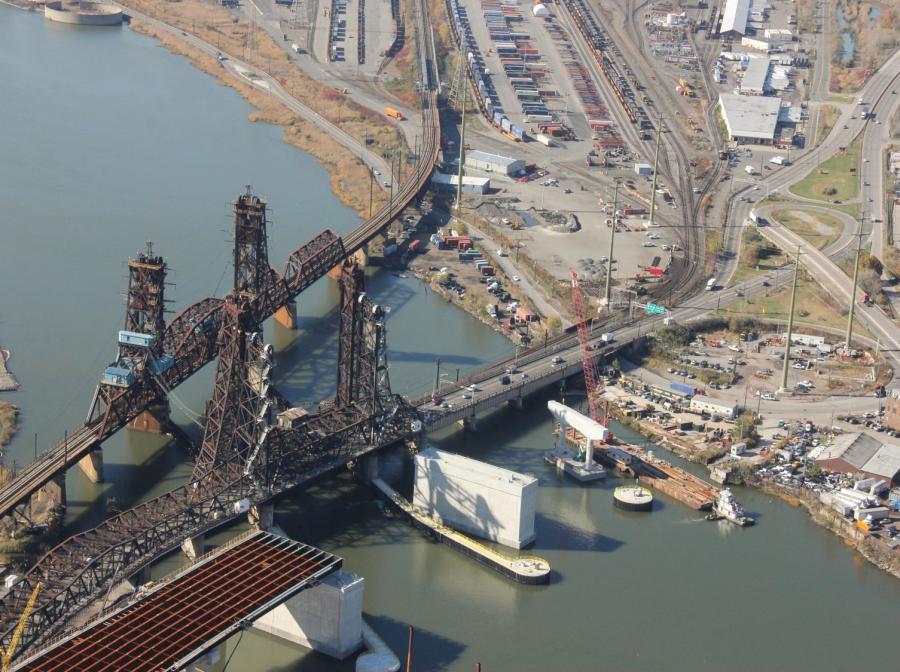 George Harms Construction Co. secured Contract 4 in June 2017. Its crews are constructing the final bridge and approach roadway segments and the improvements to the interchange at Fish House Road; the new connection ramps to Newark and St. Paul's avenues; piers 7W, 6W, 4E-1, FS1, FS2, C1-C7, A1, A2, FN1, FN2, JA1, E1 and E2; east and west abutments; and the demolition of the existing bridge superstructure.

The Vibro Concrete Columns (VCC) for the west approach, load transfer mat and lightweight fill are part of this contract. Walls 1-10 and Sign Structures 1-9 also will be completed.

After traffic is fully transferred to the new bridge, the existing bridge will be removed. A portion of the substructure will be removed where the foundations are not shared with the Conrail Bridge. Existing Piers 9-21 and the east abutment will be removed to below the existing ground line. Final roadway construction will be included using various maintenance of traffic schemes to complete at grade Ramp B and D and complete transitions to the Route 7 Mainline, Fish House Road, Ramp A (Route 1&9T), Newark Avenue and Ramp P and Jughandle J. This contract also includes various utility relocations to accommodate the new bridge and roadway alignment.

The existing bridge will be maintained until traffic can be switched onto the new one.

"Maintaining existing traffic patterns throughout construction is a prerequisite for NJDOT," said Ahrens, who noted that the demolition of the old bridge's superstructure will begin afterwards.

Social media and web sites are being used to alert motorists of traffic impacts and construction updates.

NJDOT began preparing the public about the project all the way back to 2003 through meetings in terms of the need, design and construction schedule.

‘They also began work on electrical and mechanical connections for the lift span," said Ahrens. "Under Contract 4, George Harms Construction completed the approach spans on both sides of the new bridge and flyover ramps in Kearny. They made substantial progress on roadway work on Fishhouse Road in Kearny, and continued to work on utility relocations. 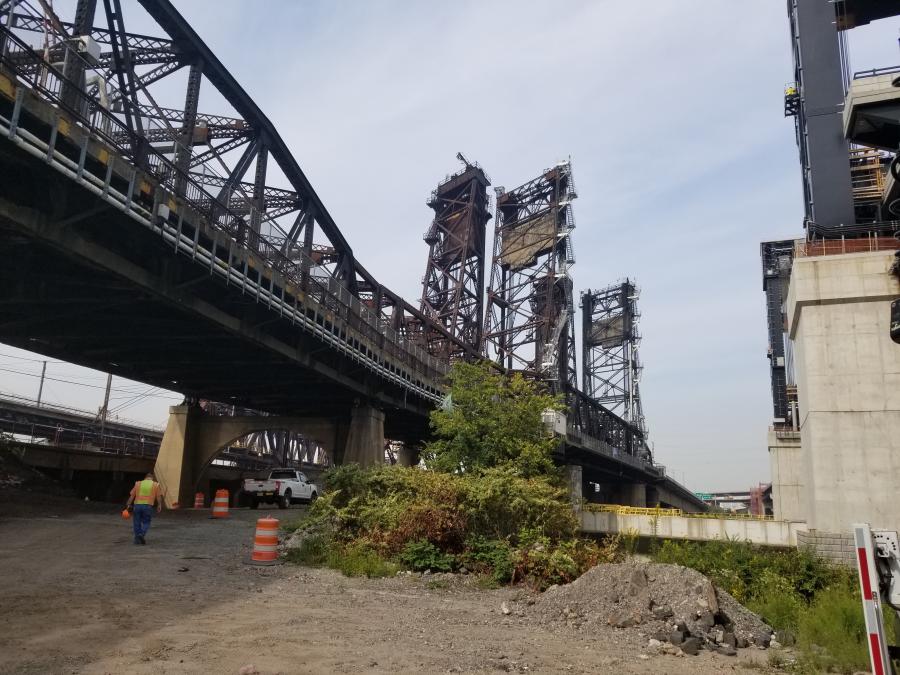 The 2021 construction season will be a busy one.

"Under Contract 3, the contractor anticipates completing mechanical and lift span work, including completion of the lift span control houses," said Ahrens. "Under Contract 4, traffic will be shifted onto the new bridge and the old bridge will be demolished. Work on Fishhouse Road will be completed, along with the approach roads for the bridge. The contractor is also expected to begin construction of the Newark Avenue ramp in Jersey City this year."

The demolition of the existing bridge should take five months.

Final roadway construction will occur at the same time as the demolition. This will include using various maintenance of traffic schemes to complete at grade Ramp B and D and complete transitions to the Route 7 Mainline, Fish House Road, Ramp A (Route 1&9T), Newark Avenue and Ramp P and Jughandle J. Various utility relocations are required to accommodate the new bridge and roadway alignment."

Many local and regional subcontractors have been involved in all five contracts, with several hundred construction workers on-site over the years.

The amounts of materials generated from excavations and demolition, when all is done, should include: 150,000 cu. yds. of excavation; 157,000 tons of soil disposal; one million lbs. of steel; and 6,000 cu. yds. of concrete. General contractors are recycling as much as possible, be it on-site and at recycling centers.

The general contractors purchase and rent equipment from a variety of regional and local dealerships. CEG