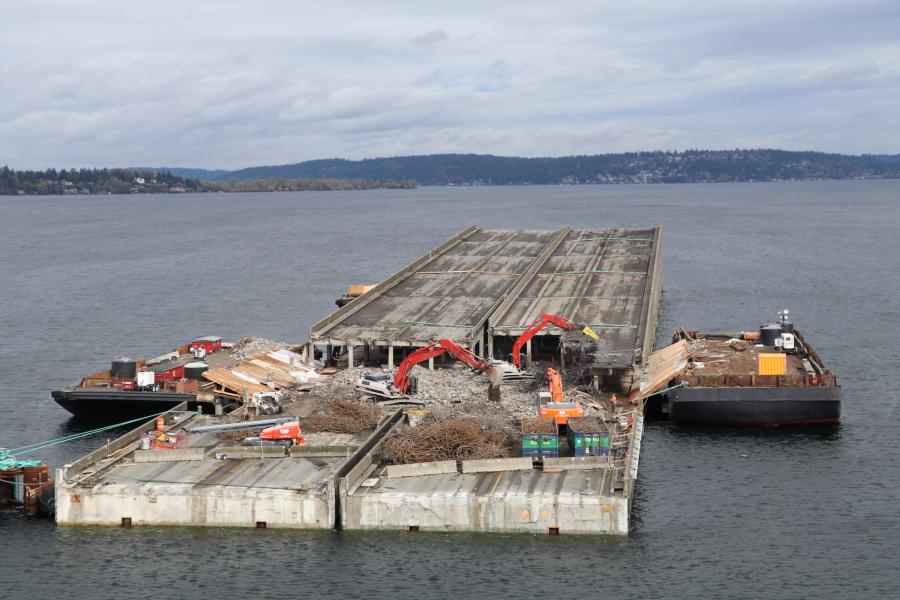 Washington State Department of Transportation photo Pontoons with superstructure are moved to a staging area on the lake so the superstructure can be demolished in place.

Since its opening in 1963, the state Route 520 Bridge provided Seattle and Eastside residents a shortcut across Lake Washington. By the 1990s, its 1950's design couldn't accommodate the increased number of vehicles crossing the lake, resulting in lengthy backups during rush hour. Discussion to replace the bridge began in 1997, and after nearly a decade of project designs and permit reviews, work commenced on a new SR 520 Bridge in August 2011. With the new bridge open to traffic in April 2016, decommissioning the old floating bridge is now under way.

“The scope of work is removal of all concrete structures from two feet below the mudline to everything that is visible on the lake and to remove it from Lake Washington,” said Cody Bishop, project manager of Kiewit/General/Mason (KGM), the contractor also responsible for constructing the new $1.2 billion SR 520 floating bridge. Kiewit has experience with this type of construction and demolition, he explained, having demolished the old Port Mann Bridge in British Columbia, and the company also was awarded the contract to demolish the San Francisco Bay Bridge's foundations.

For the SR 520 Bridge, KGM subcontracted the demolition work to NorthStar, although they are providing marine support and assisting with containment of the materials. Across the three work sites, KGM has a craft work force of 30 to 40, while NorthStar has 20 personnel; in addition there are WSDOT personnel and two quality assurance personnel looking after the decommissioning work on site.

he decommissioning work is, for the most part, occurring concurrently along the bridge, and KGM is on schedule to meet the February 2017 deadline.

To demolish the floating bridge section, the pontoons are being separated and will eventually be floated off the lake. Because of the grout between the pontoons, KGM built a special grout catcher so the material wouldn't fall into the lake. After being separated, the pontoons with superstructure (the elevated portions of the roadway) are held at another staging area on the lake until the superstructure can be demolished in place, said Greg Meadows, construction manager for the Washington State Department of Transportation Floating Bridge & Landings. To demolish the superstructure, Meadows said that the primary means are excavators with processors and a cruncher with a hydraulic hoe ram.

Meadows said that decommissioning the pontoons is the priority because of the winter season and the other work is self-contained for the most part. “We're not worried about it [the land-based work] floating off and crashing into the new bridge. And the work on the floating structure has actually progressed ahead of schedule.”

As crews separate the pontoons, crews also are demolishing the east and west approaches, located in Medina and Seattle respectively. Bishop describes columns supporting the approaches as a standard bridge structure, and crews are employing a “stitch break” to demolish the structure. This entails using a hoe ram to break the concrete deck between the girders. A derrick then moves the girders to a nearby barge where they are broken apart with an excavator. On the eastside approach, one of the spans was over shallow water where a barge wouldn't fit so crews had to saw cut the span and lift the pieces out with a crane.

For demolition of the transition span, a derrick crane was needed to lift the steel transition trusses off the bridge and onto a nearby barge. Meadows described it as “one of the highlights of the demolition for the large equipment pieces.”

Given the bridge's proximity to residential areas and the potential environmental impacts if debris fell into Lake Washington, the decommissioning plan received intense scrutiny by WSDOT and permitting agencies. Even after being granted the permits to proceed, Bishop said “there's constant scrutiny” of the demolition work, and Meadows added that “we are in compliance with those permits. It's just real critical to get the whole bridge off the lake, especially with the next storm season coming up.”

Protecting measures that are being employed include stationing barges below the work area so debris doesn't fall into the lake and limiting dust during the demolition.

“KGM and the state have taken extraordinary measures to try to limit dust,” Meadows said, and these measures include having a hose on the girders or concrete as the material is being crushed and the process water is taken off site for disposal. Prior to commencing demolition, KGM also did “due diligence” testing and found some of the concrete was found to have traces of arsenic, which is being taken to a designated landfill, Bishop said.

In keeping with WSDOT's emphasis on recycling, most of the 73,249 cu. yds. (56,002.88 cu m) of concrete, along with the asphalt on the superstructure, and the steel and rebar are being recycled. The 31 pontoons were sold to TrueNorth and will be repurposed.

“The whole idea [at WSDOT] is that as much as possible you want to recycle, salvage, and repurpose, and KGM has done a great job in finding buyers [of the material],” Meadows said.

With the material having been removed, Bishop said that the next phase of work is the in-water work removal of the piers and removal of the approach columns and caps, and the above-land approaches on the east side. He described each operation as having a learning curve that takes time and effort to work through.

“From the state standpoint, we did give the contractor a pretty difficult job to do because we have a new bridge directly to the north of the existing bridge,” Meadows explained, “that means all of the work has to be done from the south side of the old bridge.”

Of the decommissioning, Bishop explained that “the biggest challenge has just been the logistics,” with staging the equipment and managing the floating of the pontoons as they leave the lake.

Meadows agreed, adding, “Those are pretty major challenges that take quite a bit of management time and forethought to address. And so far, I thinkwe've been doing pretty well.” -CEG