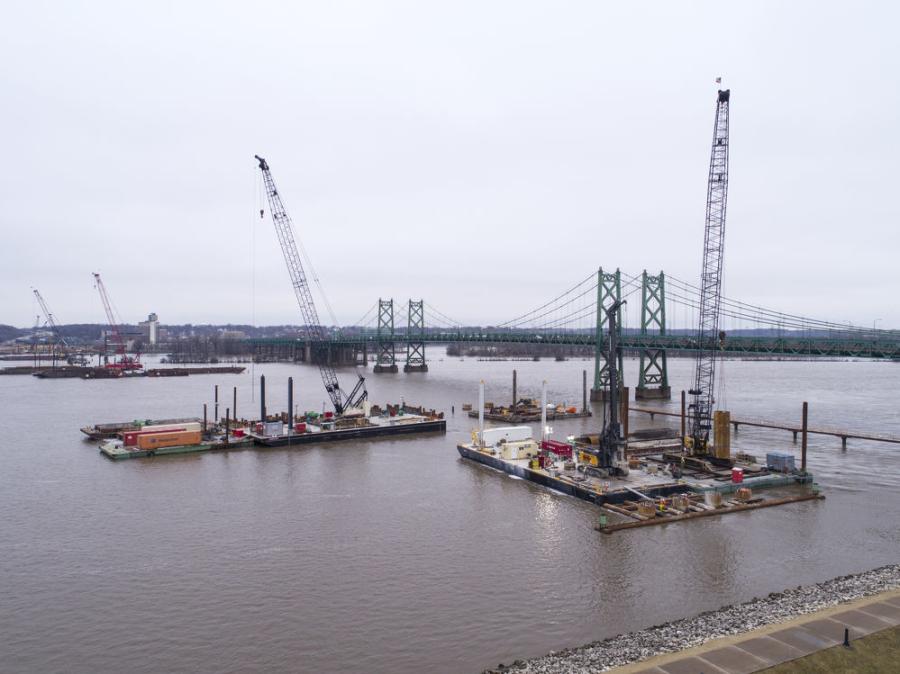 The drilled shafts were installed with simultaneous use of four drill rigs, three working off marine barges. (Michels Corporation photo)

Michels met the challenge of the Mighty Mississippi when called upon to install shafts for a new bridge carrying eight lanes of traffic over the river on Interstate 74 between Bettendorf, Iowa, and Moline, Ill. The new bridge would be an important link in the Quad Cities area, replacing a two-lane westbound bridge from 1935 and the two-lane eastbound bridge from 1960. The I-74 bridge traffic is over capacity, leading to long delays and frequent need for repairs. Currently, the average daily traffic count on the bridges is about 75,000. By 2035, it is estimated to top 100,000. A new bridge is needed to accommodate current and future traffic volumes.

The new bridge's visual highlight will be two 164-ft. arches, but the foundation system is equally impressive. As one of North America's largest deep foundation drilling companies, Michel's scope of work was to install 242 7-ft. to 10-ft. outer diameter permanently cased drilled shafts to support the 28 piers spanning the 3,370-ft. section of the Mississippi River. The piers will support a basket-handle, true-arch twin bridge.

Drilled pier foundation jobs are typically risky due to the unknowns of what lies below the ground surface. The risk on this project increased because the ground surface was below 10 to 25 ft. of flowing Mississippi River water. This project's contract documents included better-than-average soil boring information; however, with more than 200 drilled shafts in the river, Michels was destined to uncover unknown features.

Safety: Because falling into the Mississippi River was a concern of the crew members, a man-overboard drill was conducted and coordinated with local authorities. The response times were tracked and a Man Overboard Safety Plan was implemented. Fortunately, the plan did not need to be implemented during Michels' scope of work. 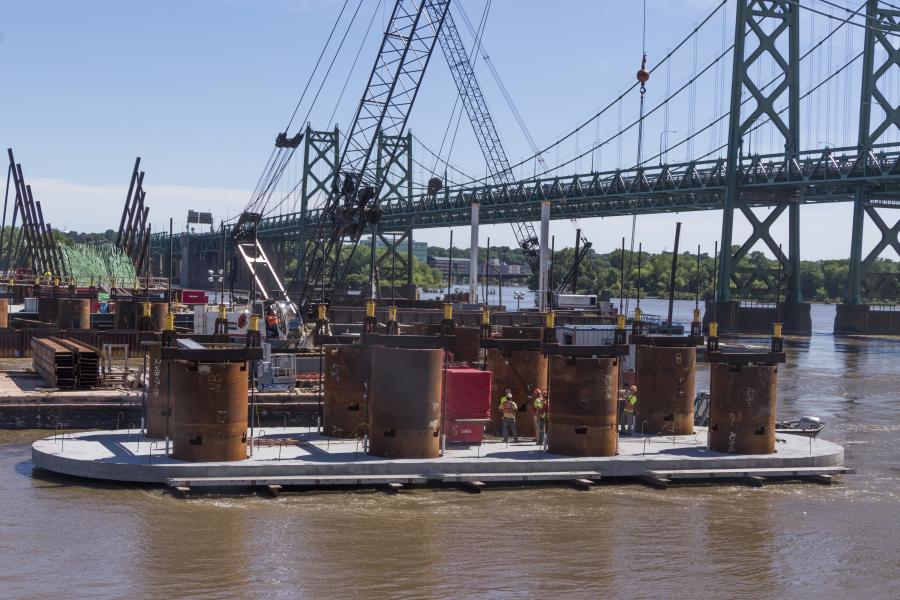 Weather: The project schedule dictated installation of the drilled shafts to run through the freezing winter and wet spring seasons. Michels Corporation reviewed historic river data prior to fabricating the permanent casing to allow for the river pool to fluctuate during the year. If the casing was too long, it would be inefficient to work around and would require cutting, which would take time; if it was too short, it would delay installation until the river levels receded. The summer season brought potential of thunderstorms and lighting. Being isolated on a steel barge with a crane and drill rig sticking into the air increased the risk of lightning strikes. The winter season brought freezing temperatures and ice.

Job Site: The Mississippi River is a unique job site. The job site had one personnel dock and one materials-loading dock. Personnel were moved using closed cabin crew boats. Materials were loaded on barges and pushed out to location with tugboats. The existing bridge was west of the new construction. During periods of increased flow, two tugboats were utilized to transport barges to ensure the barge remained in control and spotted in the correct location for use.

Safety: Daily safety discussions took place prior to the start of work each day. Once a week, a foundations-related safety topic was discussed with the group.

Environment: Prior to the arrival of the Michels drilled shaft operation, a team of divers relocated endangered clams. Another challenge the crews ran into was the discovery of caverns when drilling into some parts of the bedrock. Michels worked with the engineer to develop a plan to construct the drilled shafts that encountered the caverns. 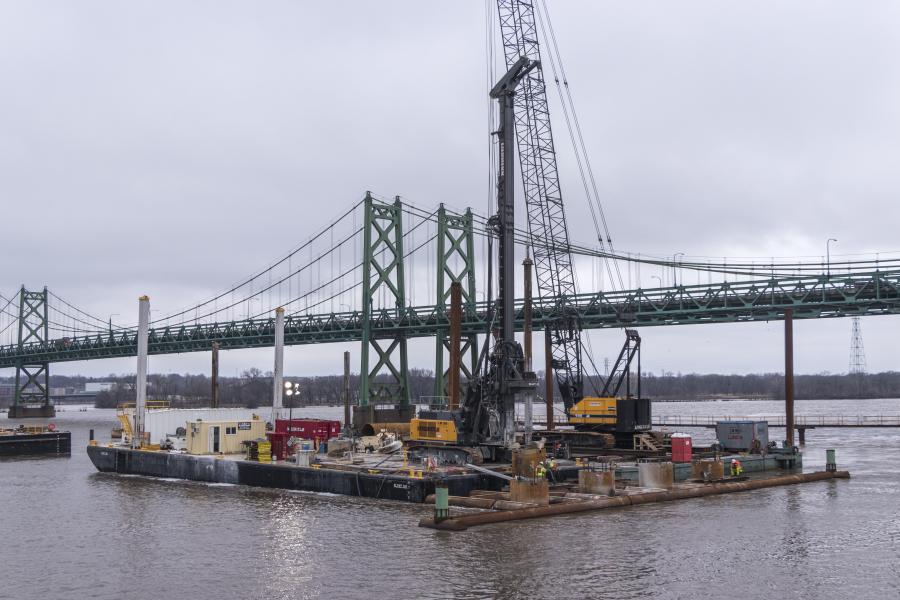 Weather: During the months with freezing temperatures, grain hopper barges were brought in to contain the drilling fluid prior to treatment and discharge.

Utilizing barges, 233 drilled shafts were installed in the river. Michels crews also installed 7-ft. to 10-ft. permanent steel casing into the bedrock, and drilled to depths of 60 ft. for each shaft.

Since the drilled shafts are the key piece in supporting the bridge structure, Michels provided cross-hole sonic logging to verify the integrity and strength of the concrete within the shafts and to add another level of quality control for the owner/customer.

A load test was performed with an Osterburg Cell within a demonstration shaft to confirm the constructed shafts were meeting designed capacities. Due to the information gained by performing a load test, 24 drilled shaft rock sockets were reduced by a cumulative length of 228 ft. By reducing the rock socket lengths, the schedule and cost of the project also were reduced.

There were limited hours each day for tugboats to push concrete trucks out to pour a shaft; push in excavated spoils; move deep foundation drilling and crane barges to the next shaft location; and supply the barges with fuel, reinforcement cages and permanent casing. Extensive planning took place each day to ensure the tugboats, the linchpins of the project, were being efficiently utilized to shift the barges and materials daily. On any given day, Michels transported five concrete trucks by barge from shore to shaft sites to pour between 40 and 240 cu. yds. of concrete.

To be productive, each drilling barge island needed to be independent and self-sufficient since there were limited crew boats and it took approximately one hour for a round trip back to the dock. Additional planning went into stocking the supply trailers since the foreman couldn't walk over to their pickup truck and grab a screwdriver or pliers.

Two of the project piers were in the main river channel, and there was not any overburden material above the bedrock. This made it very difficult to place the casing in the correct location and seat it into the bedrock with the main channel river currents.

A crude sketch turned into a casing kerf-cutting tool, which was nicknamed the "Kitchen Sink" by the crew members. This tool allowed for a kerf to be cut into the bedrock to allow the casing to be installed in the correct location, meeting project specification location tolerances.

The majority of the work on the cofferdams and footings took place during the winter months of 2017-18. The crews worked 24 hours a day to complete the critical concrete footing pours.

Michels' team of deep foundations contractors successfully completed their portion of the contract six months ahead of the construction schedule. Teamwork was on display throughout the job from the pre-job planning to the daily coordination meetings. The crew took pride in their work and always took time to explain what Michels was doing on the river to curious local residents. At the end of the day, Michels was the deep foundation contractor honored to be a critical part of building a bridge to allow the traveling public to safely traverse the largest river in the United States, the Mississippi.