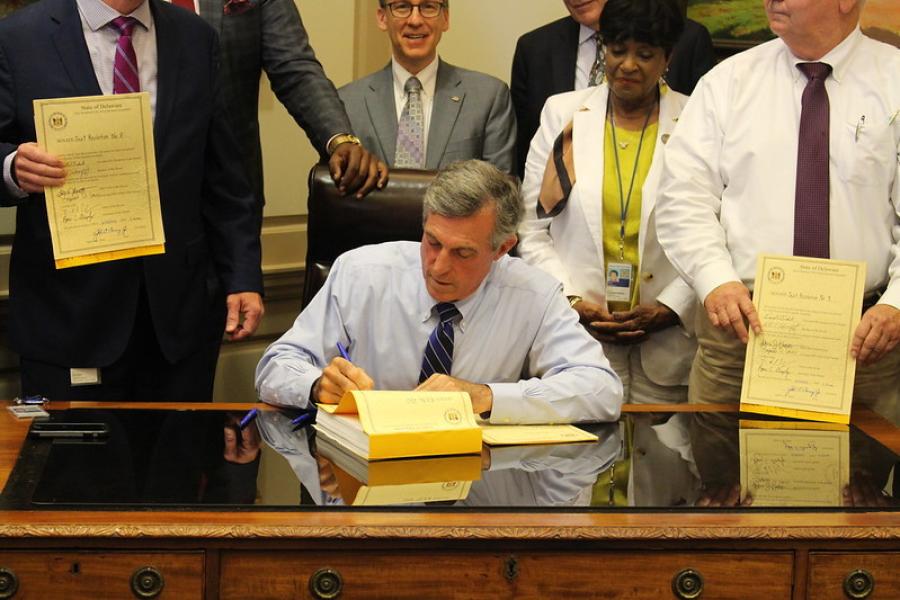 Gov. John Carney signed the Fiscal Year 2023 operating budget for the state of Delaware on June 28. (Photo courtesy of the Office of the Governor)

Delaware Gov. John Carney signed a state-record $1.4 billion capital budget for fiscal 2023 on June 28 that will fund various construction, planning and repair projects for Delaware's infrastructure, buildings and grounds in all three of its counties.

Earlier in the day, the state's House of Representatives overwhelmingly approved the bond bill, followed in short order by the Senate also giving the new budget its stamp of approval.

Besides providing money to dozens of construction and renovations projects in the First State, the new law is designed to set aside funds for many initiatives to protect Delaware's natural resources.

The fiscal 2023 capital budget is the product of many weeks of hearings by the Delaware Assembly's Joint Bond Bill Committee, a 12-member panel of representatives and senators from both parties charged with drafting the bill.

In a statement, Rep. Debra Heffernan (D-Bellefonte), who chairs the Joint Bond Bill Committee, said, "Delaware has been fortunate to have strong revenues in recent years, and we have been smart to invest those funds in various projects throughout the state, [such as] rebuilding our infrastructure, making our schools safer, improving our state parks, preserving open space and farmland, and addressing drainage, beach and dredging needs in our state.

"These projects and others will ensure students attend new and upgraded schools, that our roads are easier to travel, and that our environment is protected. I'm grateful to the hard work and input from fellow committee members and advocates to produce this capital budget."

The Cape Gazette in Lewes reported that the bond bill includes $90 million for the Community Reinvestment and Redevelopment Fund, which will provide funding for capital projects throughout Delaware community nonprofit and municipal organizations.

Democratic Sen. Nicole Poore, from New Castle, and co-chair of the Joint Committee on Capital Improvements, explained, "Every single project funded through the capital budget will help create good-paying jobs that will put Delawareans back to work building new schools, new libraries and upgrading our world-class parks, while also providing clean drinking water, preserving farmland and open space, and supporting the towns and nonprofits [that] provide the services our most vulnerable neighbors depend on."