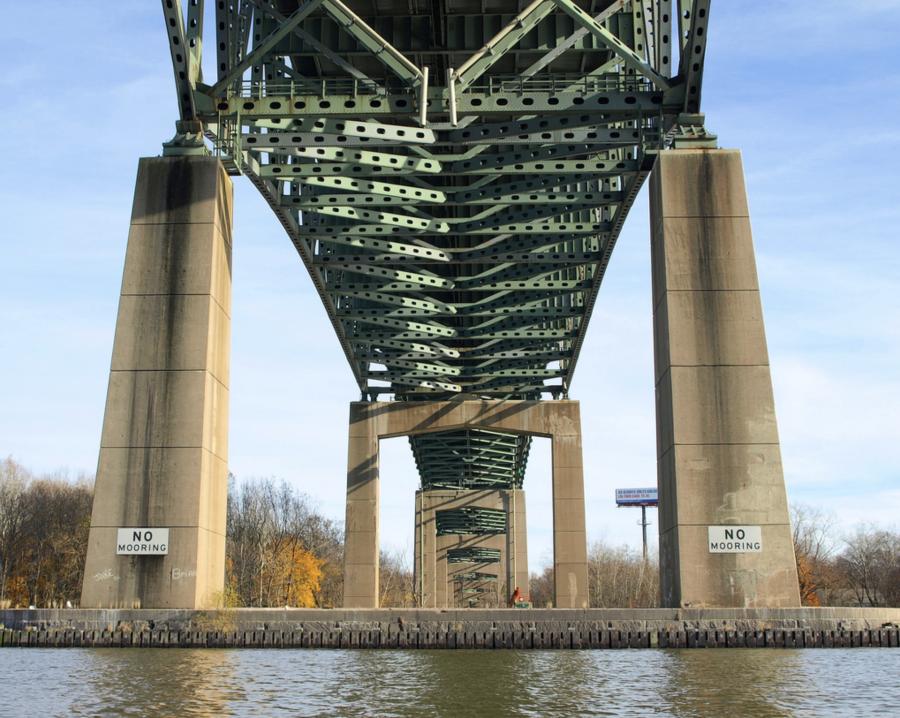 Officials from the PA Turnpike Commission (PTC) and the New Jersey Turnpike Authority (NJTA) announced that the jointly owned Delaware River Bridge is reopened to traffic as of March 9. The 1.25-mi.-long bridge, which carries traffic between the two states, first closed Jan. 20 when a complete fracture was discovered in the superstructure beneath the westbound lanes on the Pennsylvania side in Bristol Township, Bucks County.

“Many people were greatly inconvenienced by this closure over the last seven weeks, and I know that everyone is excited to get this bridge reopened and to see their lives return to normal,” said PA Turnpike CEO Mark Compton. “Without a doubt, this incident was a bad dream for the two turnpike agencies and the contractors and consultants on our team, but a nightmare for customers and neighbors.”

“We pledged to reopen the bridge as soon as we could do so safely,” said New Jersey Transportation Commissioner Richard T. Hammer, who serves as chairman of the New Jersey Turnpike Authority board. “Thanks to a round-the-clock effort involving dozens of engineers, contractors, scientists, and other workers, we are able to get that done much sooner than we expected with every confidence that it will be safe for the motorists who depend on it.”

The PTC, NJTA and at least two dozen contractors, consultants and other entities that make up the joint repair team have been working to fix the fractured truss member, or girder.

“We were able to bring in some of the very best minds in the field to work with the staffs of our agencies to evaluate the fracture and then design and execute the repair,” said Joseph W. Mrozek, New Jersey Turnpike Authority executive director. “Because of hard work by a lot of talented people, we'll be reopening the bridge weeks ahead of the date we projected when it was first shut down.”

“Given the number of experts who have inspected, tested and studied it over the last 49 days, it's safe to say this bridge is perhaps the most scrutinized structure in the nation and maybe the world,” said Brad Heigel, PA Turnpike chief engineer. “We have a high level of confidence on both shores of the river regarding the reliability of our repair and the safety of the bridge for travelers and for nearby residents.”

The repair team began the effort by immediately bolstering the truss with a temporary splice. Then, they deployed hydraulic jacks — each capable of lifting 600 tons (544 t) — held by eight, 80-ft. (24.3 m)-high towers, to realign the truss, which was displaced by approximately 2 in. (5 cm) when the fracture occurred.

“The repaired truss member is now much sturdier than the original because of the splice,” Heigel explained.

Earlier this week, the team ran a series of load tests to study the effectiveness of the permanent splice. Eight, tri-axle dump trucks carrying 40 tons (36.3 t) of aggregate were driven across the bridge while sensors installed on the truss and splice detected the structure's reaction. Load testing results showed that the bridge can support the weight of live traffic.

“We will continue to monitor loads and stresses on the bridge,” said Robert Fischer, NJTA chief engineer. “The temporary sensors will remain for now. In the coming months, we expect to install a system for monitoring the health of the bridge over the long term.”

Heigel confirmed that two mis-drilled holes — each approximately 1 in. (2.5 cm) in diameter and filled with weld material — were identified as the primary factors that contributed to the fracture. But bridge experts agree it was certainly not the only trigger.

After an exhaustive study of the entire bridge — which included weeks of hands-on inspections, ultrasonic testing and metallurgical analysis from three different, independent laboratories — no other such weld-filled holes were found to be present.

“We continue to look at other factors such as air temperature and loads like heavy trucks or high winds that may have had an impact when the fracture occurred,” Heigel said. “But getting a definitive answer as to why it happened is akin to solving a 60-year-old mystery perpetuated by unseen offenders. We may never know for sure what all the factors were that caused the fracture,” Heigel said.