Delegation Introduces Legislation to Designate I-14 Corridor in Three States 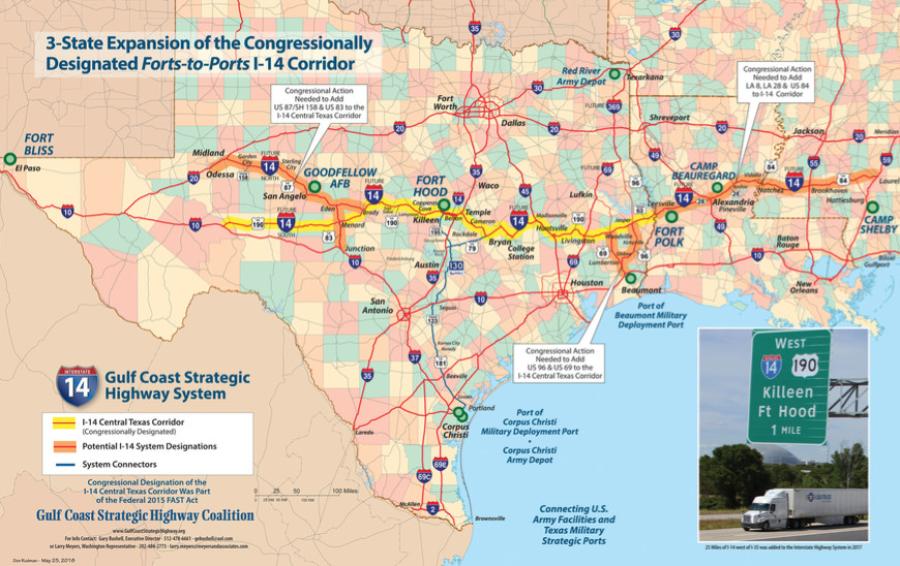 A U.S. Congressional delegation from Texas, Louisiana and Mississippi has introduced legislation that would expand the congressionally designated Interstate 14 corridor across the three states.

The corridor currently runs from west Texas to the Texas-Louisiana border generally following U.S. 190. The first 25-mi. section of I-14 from Killeen and Fort Hood to I-35 at Belton was added to the Interstate Highway System in 2017.

This legislation builds upon the original designation, written by Babin as part of the 2015 FAST Act highway bill, of the Central Texas Corridor as the future I-14, and does not eliminate any currently authorized routes, according to a press release from the Gulf Coast Strategic Highway Coalition. It also authorizes the new interstate route using the general pattern of existing roads and highways, but leaves the final determination about the exact path of the route with state and local officials who know their communities best.

“One of President Dwight Eisenhower's top priorities and greatest accomplishments was the construction of an interstate highway system that connects America's military assets, businesses and communities from coast to coast,” said Babin. “The legislation we introduced is a complement to that legacy. I-14 is already known as the 'Forts to Ports' highway, and we are building on that success with further improvements, including a nonstop interstate connection from Goodfellow Air Force base in west Texas to the strategic seaport in Beaumont. And of course, it will finally give countless communities access to the benefits of an interstate highway, with a design and implementation process run by state and local transportation authorities, not Washington bureaucrats.”

Earlier this year, the Texas Transportation Commission, approved the designation of a 25-mi. segment of the state highway system as Interstate 14.

The commission's action provides the first interstate link for Fort Hood and area communities connecting to I-35.

“As envisioned, the proposed I-14 corridor would improve access and connections to military installations along the U.S. 190 corridor, as well as provide a critical artery for commerce, that ultimately would stretch from west Texas to the Texas-Louisiana border,” said Marc Williams, TxDOT deputy executive director. “With thousands of newcomers arriving in Texas each day, I-14 also will help accommodate and increase mobility of the state's growing population.”

But while the expanded interstate has support in central Texas and neighboring states, it's not likely to happen any time soon, Williams said.

“The most significant challenge is the lack of money and resources,” he said. “I-14 here is a very long-term vision. There are other priorities in the region. Sections of U.S. 90 are only two lanes. To be designated as an interstate those sections need to be built to interstate standards. If you think about an interstate highway, you're talking about a fully controlled freeway. On ramps, over passes. Until you get to that type of a roadway we can't designate something as an interstate. Like a lot of DOTs around the nation, don't have the ability to just go out and build projects anticipating the project demand will come in the future.”

No price tag for the new interstate has been tallied, but the sum is likely to reach into the billions, he said.

“Upgrading a road to meet interstate standards, costs some times between $30 to $50 million a mile. That's to go in and put in extra lanes, overpasses, acquiring the right-of-way, the utility work, frontage roads we build out here in Texas. It can be a very costly endeavor.”