The Terex CTT 161 tower crane had more than proven its worth during the first stage of new construction for the Matthias-Claudius-Haus nursing home in Waldshut, Germany, so Waldshut-Tiengen-based construction company Schleith insisted on the use of a Terex crane for the second stage of construction as well. The subcontractor in charge, Lörrach-based Meier-Krantechnik, complied with the request and proceeded to order a Terex CTT 162-8 tower crane, the successor to the CTT 161.

"That was the first project where tOn behalf of Herrenknecht AG, MSG Krandienst GmbH loaded the drive system for a tunnel boring machine from a heavy goods vehicle to a ship at the Rhine port of Kehl. Due to the fact that the load had a large weight of 220 ton (200 t), the company decided to rely on the lifting power of a Demag duo consisting of two all-terrain cranes, a Demag AC 500-8 and a Demag AC 700-9.

As the MSG team arrived at the Rhine port of Kehl with the two Demag cranes, three 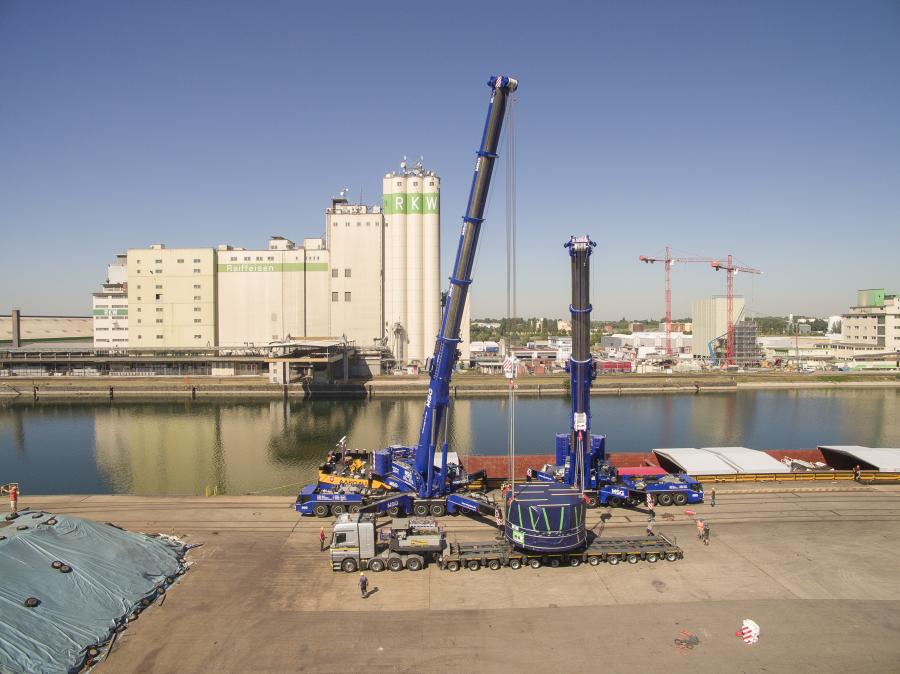 trucks, and an escort vehicle early in the morning, they noticed that their one-day job was off to a good start. Not only was there a clear blue sky, but there was also barely any wind at all — in other words, the weather conditions could not have been any better.

Accordingly, the team's preparation work went smoothly. A total of four MSG team members needed only two hours per crane to prepare their machines for the lift, something that was mainly made possible by the ease of setup of both Demag cranes, according to the company.

In order to lift the 220-ton load, the MSG team determined the best crane configuration for the lift consisted of using a boom length of 84 ft. (25.5 m) and a counterweight of 110 tons (100 t) on the AC 700-9 all-terrain crane. The star-shaped outrigger bases, which were extended to a length of 39 ft. (12 m), provided the necessary stability. These bases are designed to attain a high level of stiffness while minimizing the amount of deformation that occurs when lifting loads.

Once set up this way, the cranes were prepared for the upcoming lift. What followed was the "fine art" of lifting. Working together, the AC 500-8 and the AC 700-9 lifted the tunnel boring machine drive system bit by bit to a height of 9.8 ft. (3 m).

"It all came down to how our two crane operators were able to work together with utmost accuracy. They had to stay perfectly coordinated in order to ensure that the weight would remain properly distributed between both cranes at all times," explained Reinhard Schmitt, crane operator of the AC 700-9.

A challenge, to be sure, but the crane operators' experience and the high precision of the Demag cranes being used helped that it was easily overcome. This made it possible to use a working radius of 46 ft. (14 m) to lift the drive system off from the heavy goods vehicle, move it over the ship, and then carefully put it down there.