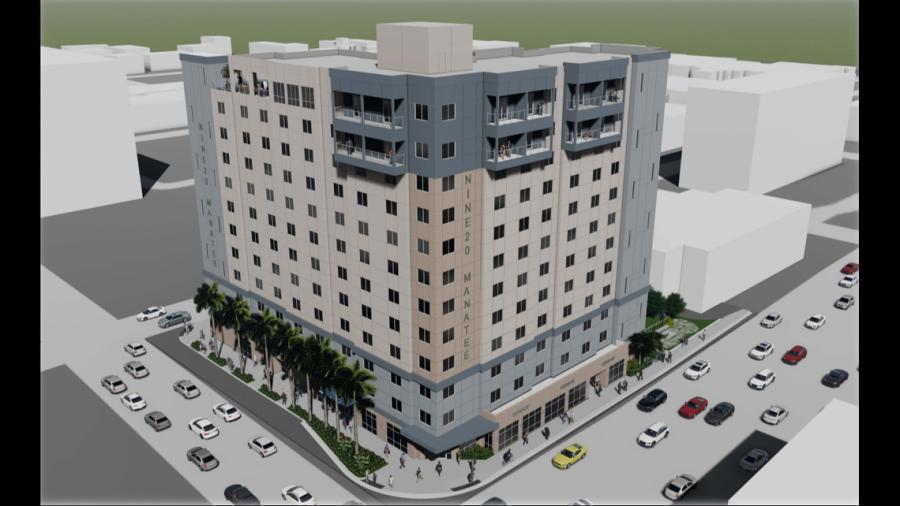 Demolition crews have begun the task of bringing down a long-abandoned office building in downtown Bradenton, Fla., to clear the way for a new 12-story apartment complex.

On June 15, cranes and bulldozers tore down a substantial chunk of the former public defender's office at 920 Manatee Ave. West. Project managers hope to complete the demolition of the five-story building over the next few weeks.

The Herald reported June 20 that by the end of 2023, Bradenton's NDC Construction Co. wants to open Nine20 Manatee, an apartment building aimed at providing downtown units for the local workforce. Rent will be determined based on a tenant's income, but prices will range from approximately $1,300 for a one-bedroom unit to $1,600 for a two-bedroom apartment, according to federal guidelines.

"We're targeting young professionals who want to live downtown, so we're excited to be the first to offer this sort of product," said NDC President Ron Allen.

Just a few blocks from where the wrecking crew is working, officials at Bradenton City Hall voted June 15 to approve minor changes to the planned structure, which will feature 5,000 sq. ft. of retail space on the ground floor.

According to newly provided renderings, NDC tweaked the design of the building to include protruding balconies on the 11th and 12th floors. The ground level also will feature an awning that stretches out over the sidewalk.

"I like it," Councilman Patrick Roff told the Bradenton news source.

NDC also asked permission to build more units than what was originally planned for the Nine20 Manatee development. Council members had no issue with the request to add seven more apartments, raising the total to 137 units.

"In this community, we are thousands of workforce units down from what we need," said Bradenton Mayor Gene Brown, noting the local shortage of affordable housing. "I think that's something we've all got to think about."

Located at the northwest corner of Ninth Street West and Manatee Avenue, the building has been derelict since the public defender's office was moved into the Manatee County Judicial Center in 2007. In July 2019, the county held an auction to get rid of the surplus property, selling it to Allen for $100,000.

Nine20 Manatee is aligned with Bradenton's long-sought desire to offer more housing in the downtown area, the Bradenton Herald noted. According to NDC's initial presentation to the board, the building will include fitness areas, a dog park and a rooftop gathering space.

Allen said residents can expect to find more information about how to apply for one of the units in the spring of 2023.