Demolition Marks Start of $110M 'The Exchange' in Salt Lake

Construction crews in Utah are working on a $110 million project that will be among downtown Salt Lake City's most architecturally significant buildings. Totaling 2.3 acres, The Exchange will feature a mix of housing, retail, coworking and incubator space.

"The need for housing that's affordable to middle- and low-income people has never been higher," said Developer Ivan Carroll of Giv Development Group. "The Exchange seeks to provide both market-rate and affordable, high quality downtown living to help alleviate some of those needs." 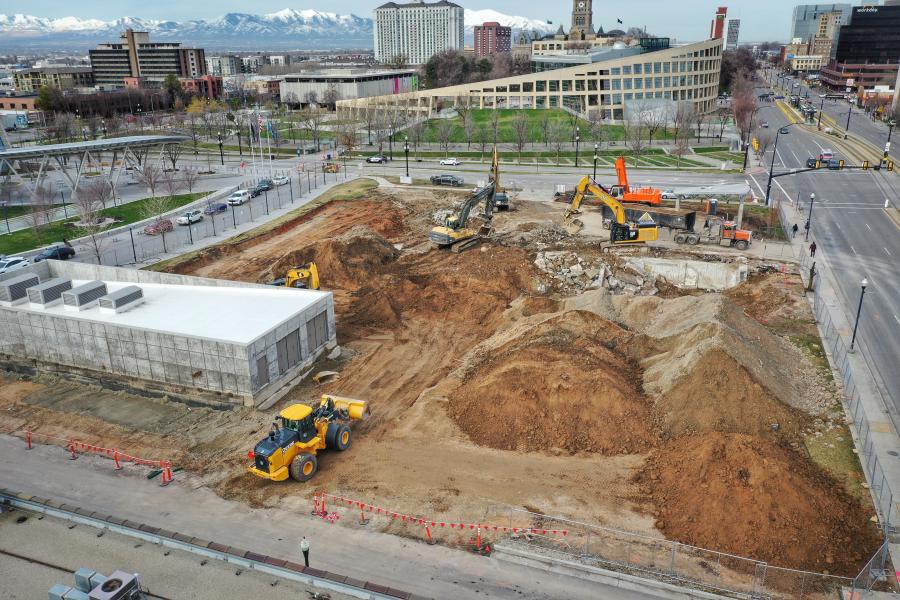 Plans call for more than 400 apartments. According to a May 2018 Kem C. Gardner Policy Institute report, since 2011 the state of Utah has had a shortfall in housing units that's been persistent and will likely continue. The study also showed that apartment vacancy in Salt Lake County has dropped from 6.1 percent in 2005 to 2.6 percent in 2017. The need for new housing, particularly in the downtown area near transit, work opportunities, shopping and recreational activities, has been prevalent for many years.

The vision was to create space where individuals from all incomes and backgrounds can co-exist.

"We believe a community can benefit from multiple viewpoints and is stronger, and more fun to live in, when people from different walks of life can call it home. If that community can provide housing, recreation and workspaces for people in different stages of life, even better."

Carroll said the goal was to create something that fits into the surrounding location, while also adding something new.

"This includes artwork and design elements that will be viewed from the outside, as well as common amenities residents will be able to enjoy. A lot of time was spent ensuring that the pedestrian interaction with the buildings would create a place where people want to spend time. 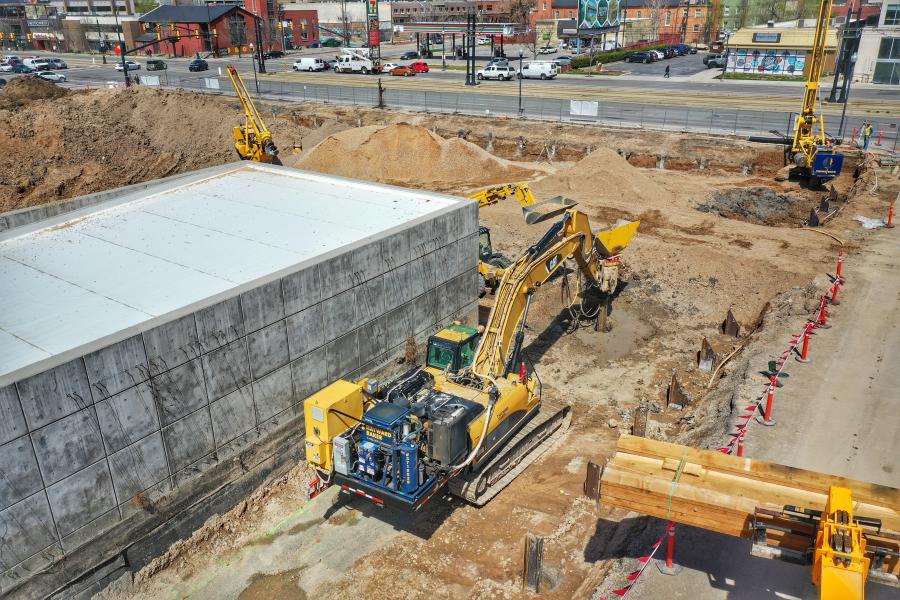 "Due to the location of these buildings and their proximity to significant structures, such as the City-County Building and the main branch of the library, it was important to make architectural statements that complemented the central part of the city."

The project was designed by KTGY Architecture + Planning and will be mixed-income, with 196 affordable units and 216 market-rate apartments. The nine-story building will consist of seven floors of residential space above a two-story parking podium and ground-floor retail that will front 400 South.

The five-story building will consist of micro residential units above a parking podium and the "The Shop at Salt Lake City," a 30,000-sq. ft. co-working and business accelerator space.

The location is at the heart of downtown Salt Lake City, with various transit options, parks, amenities, services and work opportunities nearby.

"Being located so centrally to so much of the city makes it the perfect location for mid- and high-density housing," said Carroll. "The Exchange will sit on the same block as The Civic Campus, which is one of the centers for business and culture of downtown Salt Lake City. This campus includes many of the city and county offices, the main branch of the public library, the public safety building, The Leonardo Museum and parks, and is a short distance from other theaters, shopping areas, city, county, and federal services, restaurants and more." 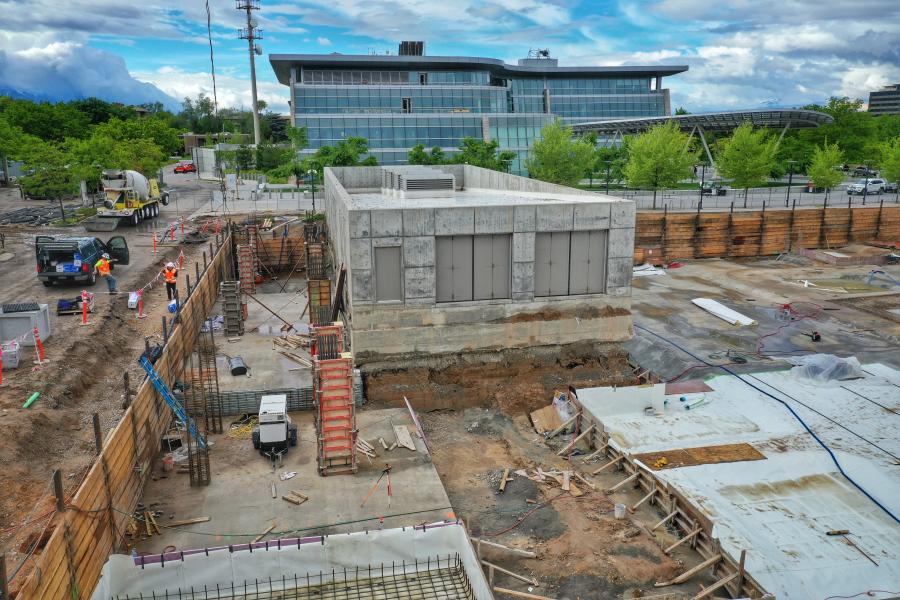 Officials released an RFP for the land in January 2017. Domain and Giv have been working with architects, engineers, contractors, lenders, tax-credit organizations, and the city since that time.

"The first building was able to finalize all the legal and permitting processes and begin construction at the end of February 2019," said Carroll, adding that work on the second building should follow this summer.

"The project faced unique challenges in ensuring it could provide affordable apartments as part of the project, and making sure the financing and costs were in line to do so. The site's location also required working closely with multiple city departments to ensure all concerns regarding design and aesthetics, access, safety and compatibility with surrounding properties were properly addressed. A lot of the time spent over the two years of preparation involved overcoming these challenges."

The ground floor retail will be anchored by an international food hall and marketplace in partnership with the International Rescue Committee's Spice Kitchen business incubator program.

"The ground floor is intended to bring activity to the area throughout the day. The plan is that Spice Kitchen graduates will receive a preferred rate to open up their first food business in the space. Other vendors will also be a part of the space." 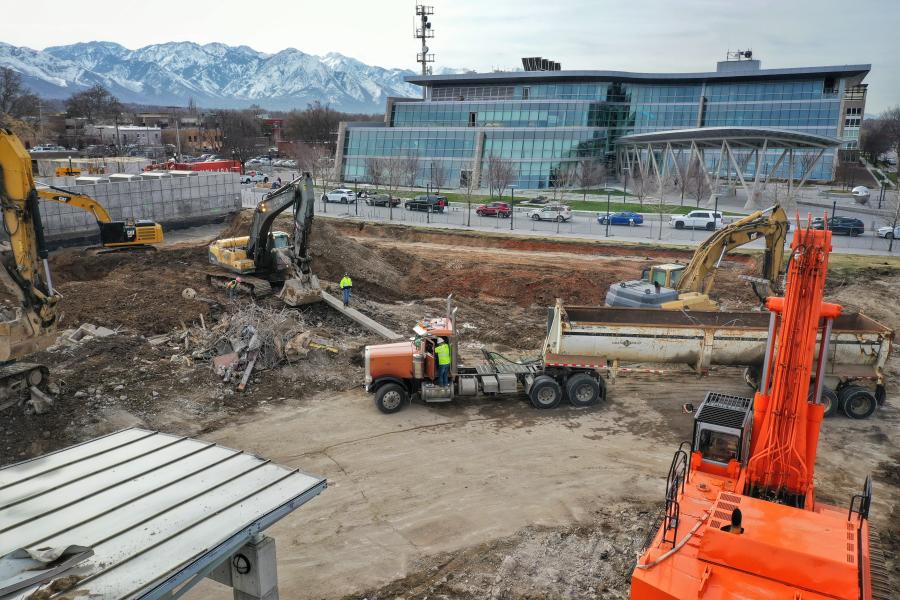 According to Tyler Hollon, who works in business development for contractor Wadman Corporation, the biggest challenge on the project has been rain, which has significantly hindered progress.

"We've had the second wettest May on record. This makes it very difficult to move around the job site, and makes it impossible to drive trucks through our dump site the majority of the time."

Work on the project began in February 2019.

"We have a two-year construction schedule. We had to demo three structures to facilitate the new construction. Two of those structures are down, and the third was to be demoed in June. There was a two-story brick structure that most recently contained Salt Lake Roasting Company. That was demoed with a track hoe. The other was the five-story glass and steel office building that was Barnes Bank. The bank had been empty for many years, and pigeons had taken over the property. This was demoed with a very large trackhoe.

Hollon noted that the material was sorted on site and recycled. 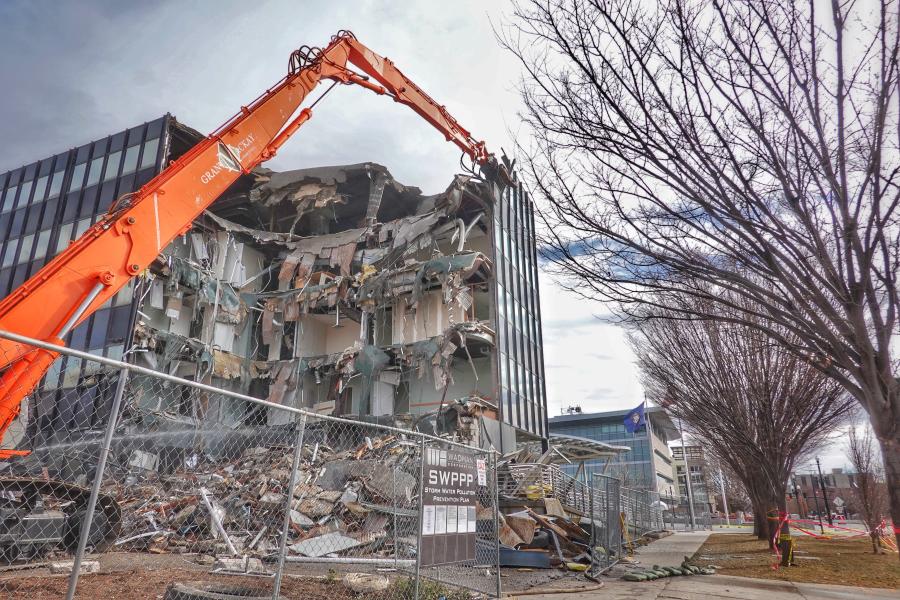 "These two buildings came down to facilitate the construction of Building A. Demo took under one month. One interesting note for Building A is that the public safety building to the south has an underground parking garage under the building and under the road that separates the building, so we had to demo the entire building from one side. There is also an entrance to that parking garage on our site that will stay intact. We have to excavate all around it for footings, and our building will actually go over the top of this entrance."

The other property being torn down is a masonry office building. It came down with a track hoe and will serve as the location for Building B.

Crews have completed excavation, and have placed the raft slab.

"We are installing waterproofing now and rebar for the footings on top of that. This work cannot take place in the rain, so we have to wait for windows of no rain and dry everything out and get as much work down as we can before it rains again." 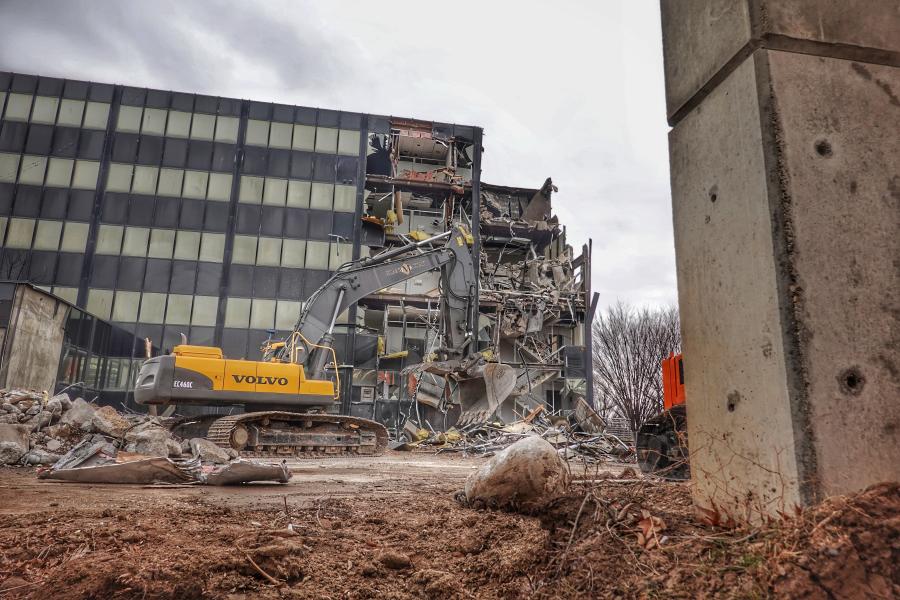 "All excavation on the tight sight was done with a track hoe and two loaders. On days we could haul, we would run 20 trucks," said Hollon. "A total of 40,000 cubic yards of material was exported from the site. As much as 25,000 cubic yards of concrete will be placed."

Concrete pumps and cranes are among the equipment being used during construction. Main materials will include concrete, steel, ACM and GFRC.

"We're excited to partner together and learn from each other," said Carroll. It's been rewarding to see how important projects that would be difficult for either to accomplish individually can come to fruition by working together. The combined knowledge and expertise have allowed The Exchange to overcome hurdles that might have made the project otherwise impossible." CEG