Before the structure could be knocked down, crews were on site of the Phoenix Trotting Park removing 256,397 sq. ft. of asbestos from three buildings at the abandoned harness racing park. 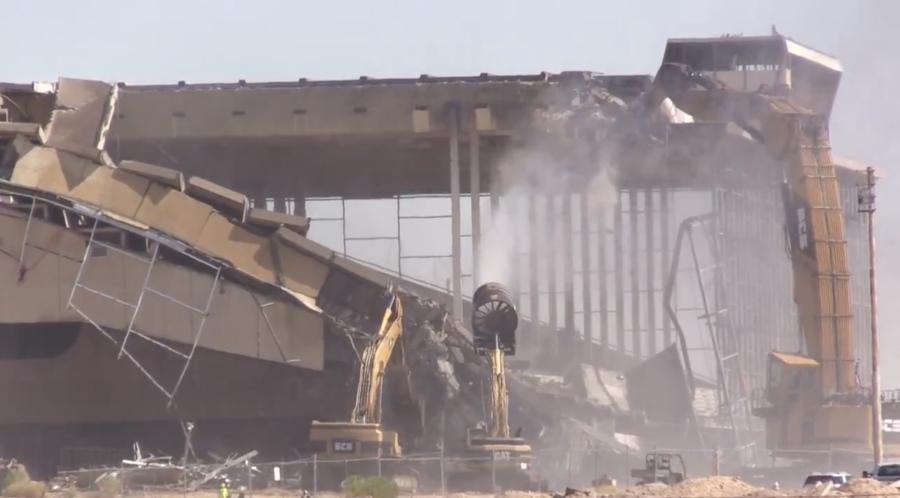 Demolition work on a stadium that has been part of the Phoenix, Ariz., landscape for more than 50 years is nearly complete. (AZ Central image)

Demolition work on a stadium that has been part of the Phoenix, Ariz., landscape for more than 50 years is nearly complete. Major demolition of the concrete structure began on Sept. 27 and it will take a few months to remove the 20,000 tons of rubble.

Before the structure could be knocked down, crews were on site of the Phoenix Trotting Park removing 256,397 sq. ft. of asbestos from three buildings at the abandoned harness racing park. While deemed a renovation, the work was actually the asbestos abatement necessary before demolition of the massive grandstand.

“The asbestos was used primarily on the interior of the grandstand areas and also in the walkway leading up to the building. They used it as a spray-on material on the bottom side of the concrete in the grandstand. It was used for acoustics. It dampens the sound and reduces the echo chamber. As long as it is left in place, it does not typically cause an exposure issue. It's when it is exposed in renovation and demolition, it poses a problem.”

There were about 30 workers on the project. Containment areas were sectioned off in plastic and negative air machines ran inside to filter the air so there were no exposure issues, MacDonald said.

“In some of the areas where the asbestos was found they took scaffolding, cabling, harnesses and all the fall protection. The workers wore moon suits with helmets. They wore all the proper respiratory gear to assure there is no harm to the workers. It was basically like a Ghostbusters job. The asbestos was underneath all those grand stands. You can imagine hanging under the grandstands in those moon suits in 106-degree heat.”

The park was built in 1964 with the first race being run in January 1965. In 1966, after just two and a-half seasons, the grandstand was closed. Trevor Freeman, who grew up fascinated by the grandstand, had hoped to see it preserved, and set out to learn its history. In a comprehensive website (phoenixtrottingpark.com), he shares what he learned from newspapers, magazines and other resources about the massive concrete structure.

“It's very unique,” said Freeman, noting the park was originally budgeted at $2 million but came in at nearly five times that much at $9.5 million. “There's nothing else like it in Phoenix.

“The size and scale really stood out compared to everything else. The Trotting Park's wall panels, roof slabs, columns, beams and girders were all constructed of precast concrete, which was poured on-site. While commonly used today, this method of construction was considered cutting-edge in the 1960s.”

Because of the high summer temperatures, special precautions were taken in the preparation and curing of the concrete. Aggregates used in the concrete mix were cooled before mixing by introducing ice into the mixing process to dissipate the heat. The trucks used to transport the mix to the site were equipped with water spray devices to cool the drums containing the concrete while they were being hauled to the point of use. After pouring, the fresh concrete was covered with black polyethylene plastic sheets to conserve moisture as well as to simulate steam curing methods, according to Freeman.

“All of the concrete structural members [except the floor and roof slabs] were post-tensioned using a system called Prescon. The pre-cast pieces have a compressive strength of 6000-psi, approximately three times the normal strength of concrete used in more conventional buildings.

“The roof of the grandstand was supported by a series of main roof girders. These hollow, V-shaped girders measured 8 by 8 by 105 feet, and were considered 'lightweight' at 120 tons. They allowed the building to achieve unusually long cantilevers of 39 feet for the seat girders and 32 feet for the roof girders. However, the cantilever at the roof level reaches a remarkable 44 feet with the attachment of the front fascia units.”

The hollow roof girders also were part of the track's innovative heating system, which kept the spectators warm during the winter months. The trotting park was not built with air conditioning, as it was never intended to be a year-round facility. The track did house a fully air-conditioned restaurant, which operated year-round.”

The grandstand was originally enclosed in glass facing the track, with the thinnest support pillars possible, to ensure fans had the very the best view of the track, Freeman said. At the time, it was completed it was the largest single installation ever undertaken in the country.

Freeman suspects the park failed because at the time it was built, it was far removed from the Phoenix population. Today there is an interchange of two major freeways and the site is neighbored by homes, car dealerships and a prison.

The demolition calls for massive earth moving equipment, particularly a track hoe to begin the demolition itself so they can reach the top of the building to tear it down, MacDonald said.

“It is an incredible structure,” he said.

Freeman agrees, and is saddened it will not be preserved.

“It is so overdone,” Freeman said. “This thing was like three times stronger than it needed to be. I don't know why they did that, but it is cool. They dug holes into the earth and lined them and put rebar in there and pour the concrete. They would pick them up and assemble in place. They might be surprised when they show up with wrecking ball, but it's not going down easy.”