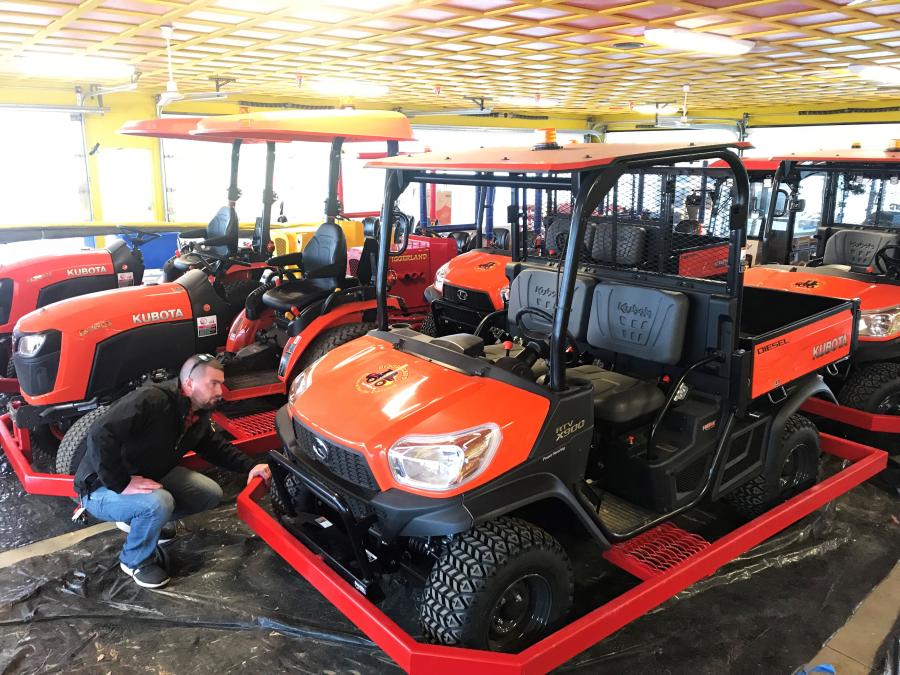 Assistant General Manager, Byron O'Donnell, does a final inspection of the new Kubota RTV and Tractor Fleet before the machines move onto their designated courses for the 2018 season.

America's only construction theme park, where children and their families drive and operate real construction machinery, is going into its fifth season and revealing the last two of five new rides shortly before opening day of the 2018 season. The Rugged Riders and Farm Tractors, both made by Kubota Tractor Corporation, will add two attractions to Diggerland's fleet of more than 25 rides that guests can drive, ride and operate themselves.

The park, which opened in June of 2014, began a multi-million-dollar expansion at the end of its last season. Diggerland has been releasing a slew of unique attractions for its upcoming 2018 season, including the recently debuted Soaring Eagle Zip Line, Ventrac Tractors, and Elevation Station.

The Rugged Riders, a fleet of Kubota RTV-900s, are rough terrain vehicles most commonly used in hard to access areas such as forestry, beaches and public works projects.

"The RTV's are comfortable, versatile and easy to operate but they also have a unique rugged look which makes them fun and a perfect fit for the park," said Park Owner Ilya Girlya. The Rugged Riders will be available for guests 48 in. and over to drive and those 42 in. and taller to enjoy as a passenger.

The second Kubota attraction released, a fleet of B2601 tractors, give guests the opportunity to interact with a line of machinery commonly found in the agricultural sector. Park patrons at least 48 in. can drive the new farm tractors while children between 36 and 48 in. may lap ride on the machines with an adult.

"The entire Diggerland team has worked incredibly hard during our off season between designing and engineering new safe and exciting attractions through all the construction elements that come along with an expansion this large," General Manager Chris Baldwin said.

"You can feel the excitement as we come closer to opening day. I think our crew is just as eager to open for the season as our guests."

The Farm Tractor and Rugged Riders will be available for guests to ride shortly after the park opens for the season on March 17th. Diggerland will be open every day from March 24 to April 8 for Spring Break and will be hosting an Easter Egg Hunt on April 1 at 12:00PM.