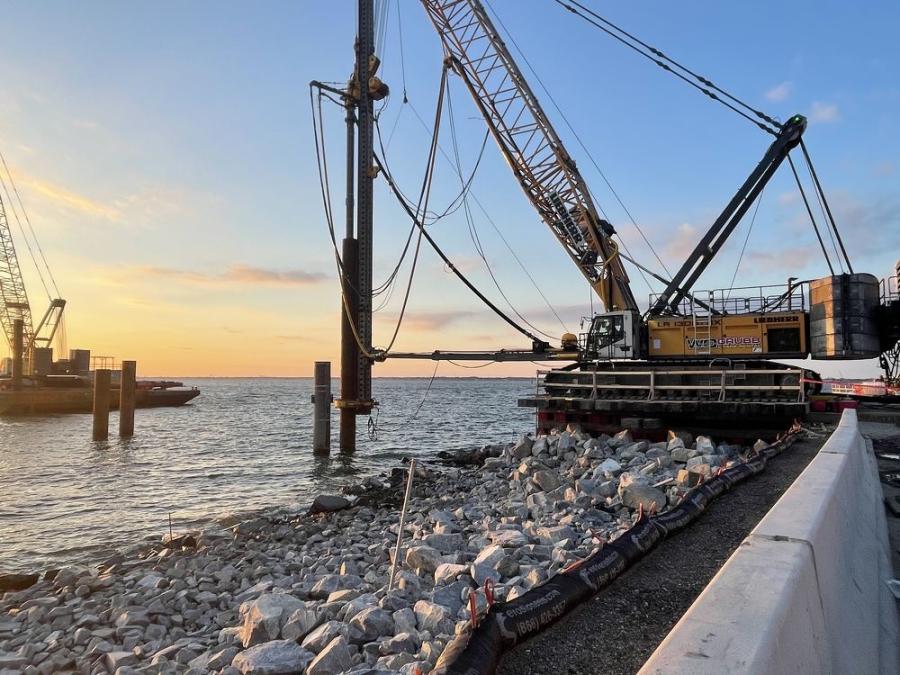 A Berminghammer drill rig for pile driving through areas of armor stone is among the equipment on site. (HRBT Expansion Project photo)

As the largest highway construction effort in the Commonwealth of Virginia's history, the Hampton Roads Bridge-Tunnel (HRBT) Expansion Project will increase capacity, ease major congestion and enhance travel time reliability when complete. The $3.8 billion design-build undertaking calls for widening the current four-lane segments along nearly 10 mi. of the I-64 corridor in Norfolk and Hampton, with new twin tunnels across the harbor. 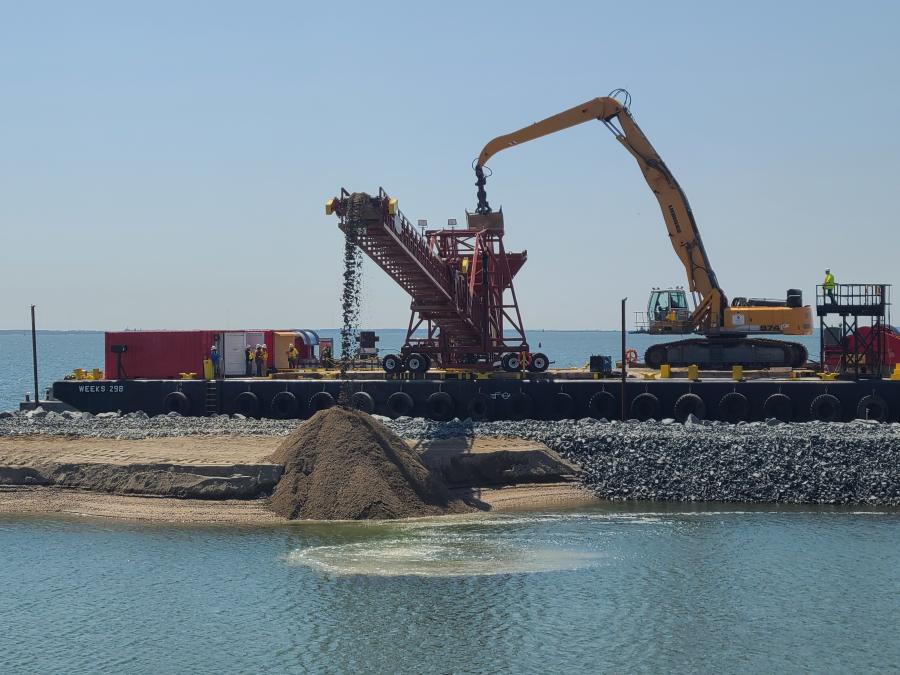 "The HRBT is one of the most congested corridors in the region, with more than 100,000 vehicles traveling the existing four-lane crossing during peak summer months," said Jim Utterback, Virginia Department of Transportation (VDOT) project director. "The expansion project will provide much needed capacity by widening the roadway and building new twin two-lane tunnels, which will expand approximately 10 miles of the Interstate 64 corridor to six full-time lanes, plus two part-time shoulder lanes. This will not only provide faster travel across the harbor between the cities of Norfolk and Hampton, but also enable greater travel-time reliability to enhance the region's economic competitiveness."

The current I-64 HRBT is a 3.5-mi. facility with two 2-lane immersed tube tunnels connecting artificial islands with trestle bridges to shore. The tunnels are approximately 7,500 ft. long.

"This is the first VDOT project to utilize the bored tunnel approach, due to technological advances that only recently made this tunneling method possible in the region's soft soils," said Utterback. "There are only two other bored roadway tunnels in operation in the United States."

Once environmental permits were approved, project-wide construction began with full notice to proceed in September 2020.

"Although the completion date is targeted for November 2025, the high-risk tunnel-construction work still lies ahead, and the project looks forward to managing these risks with a skilled and experienced team," said Utterback.

The design-build contractor is Hampton Roads Connector Partners, a construction joint venture of Dragados, Vinci, Flatiron and Dodin Campenon Bernard. They are supported by a design joint venture of HDR and Mott MacDonald.

"As a collective, the contractor has extensive experience in tunneling and major projects throughout the world, and is able to leverage its wide network of experienced team members to bring skilled and seasoned personnel to the project," said Utterback.

One significant challenge is the variety of the construction scope, essentially multiple projects packaged into a single contract.

"The project covers a complex array of construction, including three miles of bored tunnels; 15 acres of land reclamation for island expansion; 14 lane-miles of new marine trestles; widening of inland bridges; and new ITS systems, not to mention additional miles of interstate roadway widening. One of the biggest concerns is the construction of all these components, while maintaining two lanes of travel in each direction on one of the most congested corridors in the region."

Crews are currently working across the entire project corridor, including performing new drainage in Norfolk and Hampton in preparation for roadway widening; installing wick drains for soil consolidation along the widened roadway; driving 54-in. concrete cylinder piles; installing precast pile caps and setting precast concrete girders for the new marine trestles that connect to the islands. 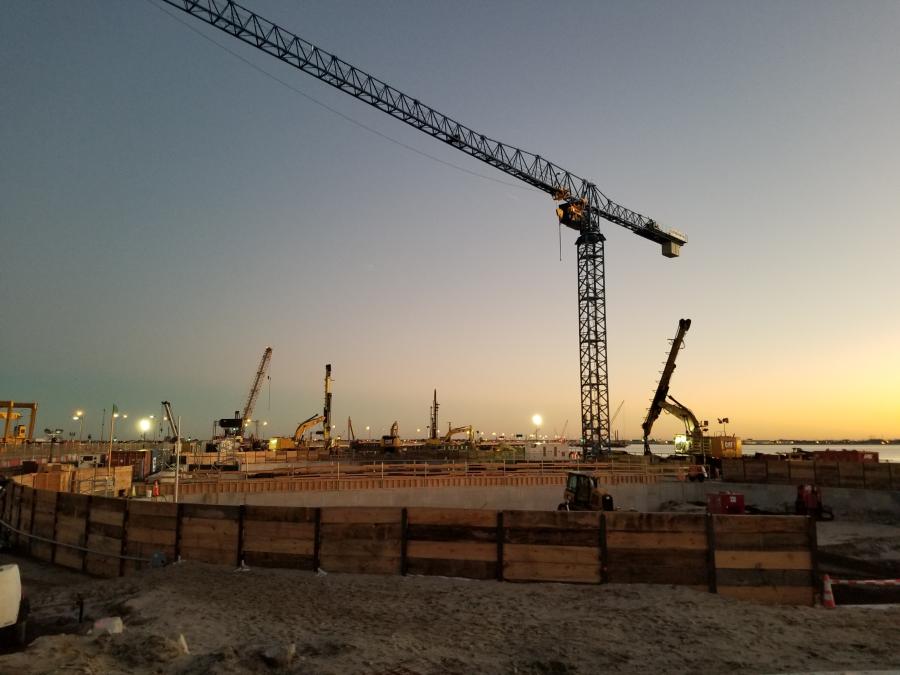 Also under way is construction of temporary marine bridges to enable maintaining two lanes of traffic in each direction, as the existing marine bridges are soon demolished in phases. Pile driving, cap installation and girder placement for widening the bridges along the I-64 corridor (including the Willoughby Bay Bridge, Mason Creek Bridge and Oastes Creek Bridge) also are taking place, as well as construction of a new south half of the Mallory Street Bridge above the interstate.

According to Utterback, "Select demolition will be conducted along the edges of the bridges that will be widened. The five bridges scheduled for replacement will be demolished in their entirety. Four of these are the existing north and south marine trestles [eastbound and westbound] that currently connect the islands and the shoreline.

"Demolition of these trestles has not yet begun. Debris from these structures will be placed in offshore reefs to create new fish habitats. For the Mallory Street Bridge in Hampton, demolition of the south side of the bridge has been completed. This includes the removal of the bridge deck, the girders and the piles in order to make way for the new bridge structure."

A variety of heavy equipment is required to complete the project.

"Hampton Roads Connector Partners has almost 600 pieces of different equipment, from a TBM and STP [slurry treatment plant]; a tower crane; gantry crane to service the TBM launch shaft; Mi-jacks; ringer cranes [including Manitowoc 4100 and American 9299]; crawler cranes [including Liebherr LR1400+superlift, Liebherr LR1300 and Manitowoc 2250]; and a Cat 374 with teledipper.

"And on top of this, we have on site the equipment that's being used by subcontractors, which includes duty-cycle marine cranes for placing island armor stone; a barge-mounted conveyor for placing sand fill in island expansion; a Berminghammer drill rig for pile driving through areas of armor stone; hydromill trench cutters for diaphragm walls; vibro compactors for consolidating fill at North Island reclamation; drill rigs for jet grouting; as well as equipment for wick-drain installation."

Utterback noted that construction is scheduled in stages to keep the Mallory Street bridge open.

"The bridge is the only overpass within the project limits, and it's important to maintain connectivity for the communities on either side of the interstate. Two-lane traffic has now been shifted to the northern part of the bridge. Crews have demolished the southern portion of the bridge and are working to construct the new structure that will accommodate the widened highway below. Traffic will be shifted to the new structure once completed, while crews demolish and build the northern portion of the bridge."

Tunneling has not yet begun.

"Mary the TBM", as named by Hampton Roads school children, was manufactured in Germany by Herrenknecht. A variable density TBM, Mary is designed to tunnel through varying ground conditions, including very soft soils and areas with shallow cover.

One of Mary's key features is her ability to vary the counter-pressure she applies to the face of the tunnel excavation by adjusting the slurry density depending on the subsurface conditions. With a diameter of 46 ft., Mary measures roughly the height of a four-story building. She is 430 ft. in length and weighs 4,700 tons.

"Mary arrived in the United States in late 2021 in 170 containers and pallets," said Utterback. "Once the launch pit is excavated to full depth, it will take roughly four to six months to reassemble Mary before she can start mining activities. Once Mary begins her journey at the south island, she will excavate the soft soils beneath the seabed and travel approximately 8,000 feet to the north island, where she will turn around and excavate another 8,000 feet back to the south island to form the second two-lane tunnel. 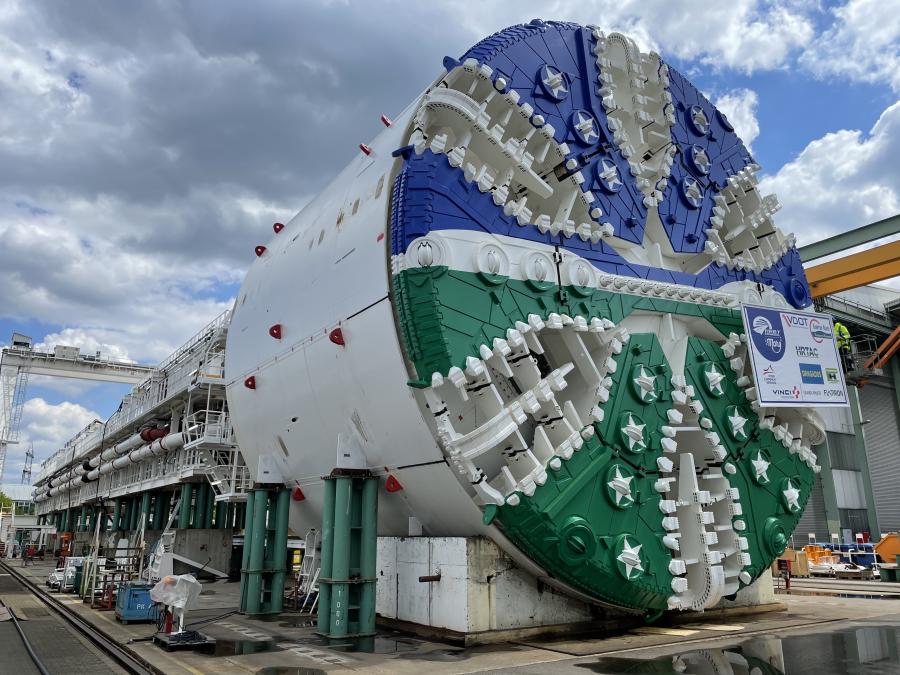 "As Mary excavates the soil, she will simultaneously construct the tunnel structure by placing precast concrete tunnel liner segments to form each ring of the new tunnel. Each ring is made of nine curved segments, each of which weighs 12 tons. The two tunnels will contain a total of more than 21,000 segments. After the tunnel's exterior structure is complete, crews will fit-out the interior structures including the roadway, egress corridor and utilities."

Regarding the cubic yards of dirt and/or materials moved during construction, south island slurry wall panels total 505,400 sq. ft. and 134,000 cu. yds. of excavation. North island reclamation includes 127,500 tons of armor stone, 222,600 tons of bund rock and 487,000 tons of sand fill. For tunneling, the TBM is expected to remove in excess of 1.5 million cu. yds. of spoils.

As for the project's effect on drivers, VDOT has committed to maintaining the existing two lanes of travel in each direction throughout the project duration, and motorists have remained alert to the lane shifts necessary to enable this construction phasing. Single-lane closures, when necessary, are typically scheduled in the overnight hours to reduce impact.

Utterback added, "This megaproject is 92 percent funded by the Hampton Roads region, with only eight percent state and federal contributions. The project illustrates the power of the region when working together to realize a common goal of improving the transportation network here." CEG