In the United States, the use of diverging diamond interchanges (DDI) is becoming increasingly popular among state transportation departments to improve the flow of vehicle traffic where busy non-freeways intersect with interstates and other freeways.

DDIs are based on the idea that if transportation designers and engineers can eliminate the need for left-turn arrows at major intersections, then signals will work more efficiently; the number of conflict points will be lowered; and highways can handle more traffic with better safety and less congestion.

Safety, operational and cost benefits of DDIs have made them an attractive alternative to traditional interchanges and provide an excellent opportunity to integrate multimodal facilities for pedestrians, cyclists and transit into the interchange.

State agencies also have taken special note of the fact that DDIs are more cost effective to build, and there are fewer impacts on the local community during the construction process.

Since the engineering concept was first used in this country in 2009, more than 100 DDIs have been put into operation in the United States, with many more in the design or construction phase.

In late April, another is scheduled to be completed just northwest of Johnson City, Tenn., at the intersection of Interstate 26 and Boones Creek Road (also known as TN Rt. 354). There, the interstate highway passes over the state road and, after several alterations to the configuration, will continue to do so when the $15.7 million DDI modification project is finished. 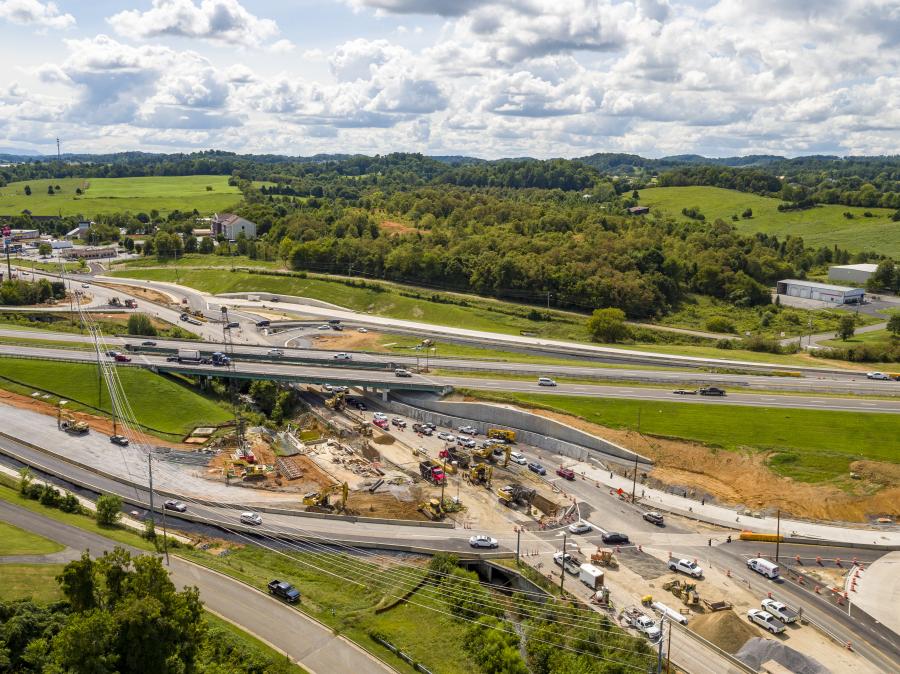 The I-26/Boones Creek Road interchange was first built in the 1960s, according to information from the Tennessee Department of Transportation (TDOT). Prior to the current work, which started in the spring of 2019, the interstate provided drivers with access to the three-lane state roadway, made up of one lane in each direction and a center turn lane.

When the contractor, Summers Taylor Inc., of Johnson City, Tenn., completes the interchange modifications, it will not only improve the safety and operation of the I-26/Boones Creek Road junction, but also will alleviate traffic congestion and support economic growth by providing accessibility to the many current and future commercial, retail and residential developments in the vicinity, said Mark Nagi, the TDOT's Region 1 community relations officer.

"The project involves modification and reconstruction of existing ramps and connector roads," he added. "The unique crisscross design of the DDI allows two directions of traffic to temporarily cross to opposite sides of the roadway in order to travel across the overpass, and then cross back and resume the original travel pattern. The DDI uses concrete dividers, stop bars, traffic signals and extensive signage to guide motorists through the interchange."

The section of Boones Creek Road under I-26, between Browns Mill Boulevard and Lake Park Drive, also is being realigned to form the DDI configuration, while existing ramps are undergoing reconstruction and extensions, allowing access to and from either direction of I-26 via Boones Creek Road.

The interchange will expand Boones Creek Road to two lanes in each direction. Crews also have built exit ramps that will diverge from the through-traffic lanes, while the entry ramps are designed to merge with their nearby through lanes. Two signalized intersections are being installed at either end of the widened overpass to control these traffic movements.

Motorists Will Do ‘The Twist'

Like most DDIs, this one in northeastern Tennessee provides several roadway twists for traffic to follow on Boones Creek Road/TN 354. For instance, cars and trucks traveling on the route through the interchange will do so on a road utilizing a twisting, snake-like pattern. In addition, drivers that turn off I-26 eastbound (Exit 17) to access Boones Creek Road westbound will slow down enough to make an almost 180 degree turn to get through the junction. The same is true for folks exiting I-26 westbound to reach Boones Creek Road/TN 354.

Nagi said the designed traffic flow at the interchange was done with "safety and cost efficiency" foremost in the TDOT's mind.

Other alterations being made on the project included:

Additional improvements, mainly for safety reasons, are part of the overall modifications to adjacent local streets and businesses, Nagi added, noting that turn restrictions and/or eliminating turn areas have been the major change.

But the I-26 bridge itself had a safety issue that needed to be eliminated, Nagi explained.

"No new bridges were constructed; however, as part of this project I-26 bridge repair work was completed on the existing steel beam bridge girders due to their being struck by vehicles transporting equipment and materials over the allowable height of the structure above TN 354.

"Traffic congestion in the area has been an issue, and bridge height also has been a problem for years," he said.

To alleviate the obstacle, TDOT has contracted to have an overhead detection warning system installed.

Summers Taylor and its subcontractors persevered throughout 2020 to get the I-26/Boones Creek DDI built, despite COVID-19. They did so, of course, while following all mandated safety precautions.

Many different subs brought their specialties to the I-26/Boones Creek Road Interchange Project.

Last Year Was Busy On Site

In 2020, Summers Taylor and its subs worked tirelessly to accomplish several important tasks so the I-26/Boones Creek Road Interchange could be completed this spring.

By late January 2021, Nagi reported, each of the project's components had been completed, apart from the following:

Summers Taylor has faced several challenges in the last three years, not including doing their job effectively amid a pandemic. 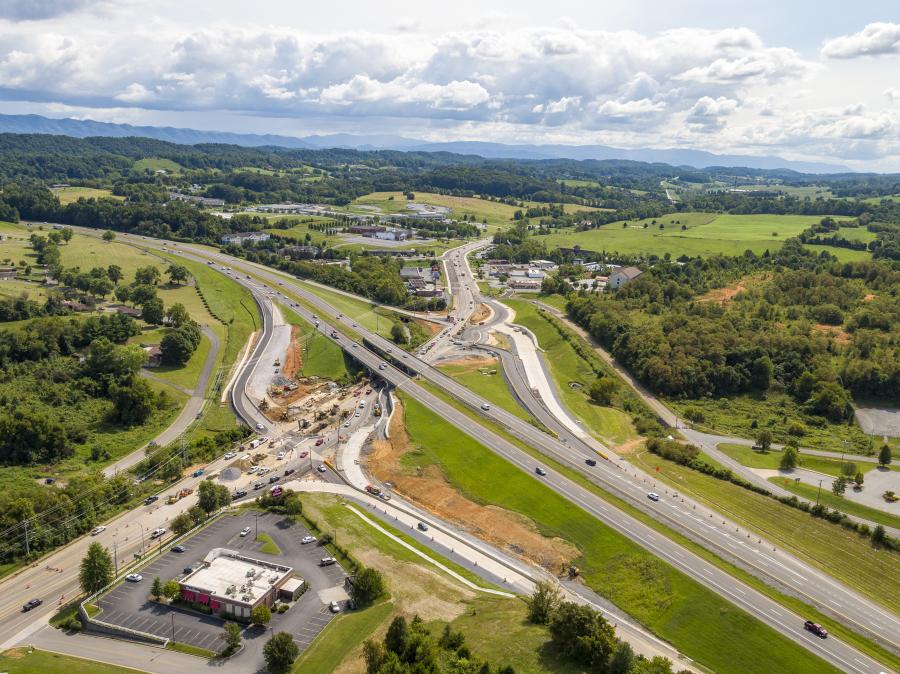 For one, TDOT's Nagi said the contractor has been working at a site where shallow intact rock has constantly been an issue during excavation, specifically with deep sewer line installation. Blasting also was required in some areas prior to grading activities.

Additionally, seepage from an embankment alongside the I-26 westbound abutment caused problems during soil nail wall construction in a mixed-use path area of the site. As a result, horizontal drains and a connecting drainage system were added to the project's scope.

The prime contractor reported that by late January, more than 70,000 cu. yds. of material had been excavated from the site. No pile driving was performed on the project; however, one of the retaining walls constructed there utilized the soldier piles and lagging earth retention technique that retains soil, using vertical steel piles with horizontal lagging.

Nagi said that two large cranes have been used on the interchange project, primarily for the box culvert extension and concrete placement at various locations.

"Summers Taylor owns its equipment, which are primarily track-mounted excavators and loaders; rubber tire backhoes and excavators; and paving equipment," he added. "Articulated trucks, transport trucks, dozers and motor graders have all been crawling around the site at one time or another."

Summers Taylor began building roads and highways, and working with DOTs, in the 1940s and is now considered an industry leader in Tennessee, Virginia and North Carolina. It tackles multiple projects annually, with contracts ranging from small jobs to major ventures.

In 2021, the company has 500 employees and a fleet of more than 250 trucks to efficiently complete any highway job.

The central office for Summers Taylor is in Johnson City, with another office in Greeneville, Tenn., each of which have a shop facility. In addition, the firm has three asphalt plants; 10 concrete plants; and three trucking locations — all in Tennessee.