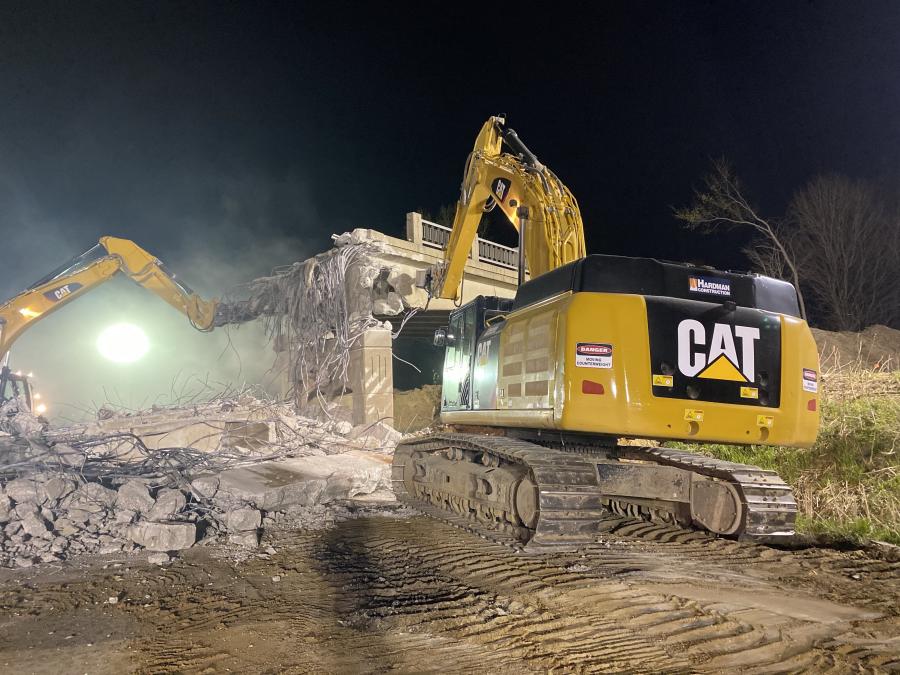 After significant delays, crews in Michigan are making steady progress on a $121.5 million project connecting the southern stretch of U.S. 31 to Interstate 94 outside Benton Harbor. The Michigan Department of Transportation (MDOT) is overseeing the work, which includes rebuilding two interchanges and reconstructing approximately 3 mi. of I-94. 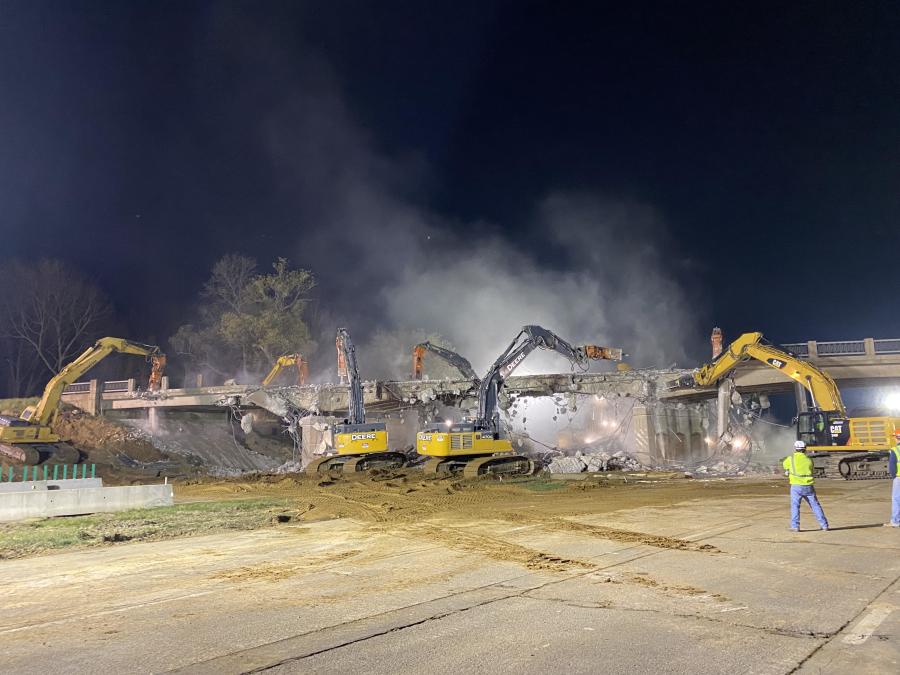 "The connection of U.S. 31 to I-94 provides for the safe and efficient transportation of goods and services through Berrien County and the rest of the state of Michigan," said Kenton McAndrew, MDOT construction engineer. "Funding for the project was secured in 2019 and expires in 2023, providing for a narrow window in which to construct the project."

The undertaking will eliminate the need for U.S. 31 traffic to be diverted onto Napier Avenue and will provide for a new interchange between U.S. 31 and I-94.

"The project ‘right sizes' the I-94 Business Loop leading into Benton Harbor from the east, and provides for the reconstruction of the existing I-94 roadway improving the pavement condition and upgrading all signage and safety features," said McAndrew.

The U.S. 31 project was first studied in 1967, with initial construction taking place in 1979. The current effort, tied to a comprehensive road plan, abruptly ended in 2002 to avoid crossing the Blue Creek Fen, the habitat of an endangered butterfly species. To further complicate matters, the "Preserve First" program in 2003 stopped most new construction, in order to prioritize existing infrastructure.

"After seeing the project halted 20 years ago, it's very exciting to be able to see it through to completion," said McAndrew, who explained that safety is a main concern for everyone connected to the project.

"We strive to complete the construction work as safely as we can, not only for those working on the project, but also for the public travelling through the work zones.

"The biggest challenge so far has been managing construction of a project of this size through a pandemic. The usual face-to-face meetings have been replaced by a virtual environment. Being able to engage all participants constructively and perform the work needed while meeting the COVID guidelines of not only the state of Michigan but all contractors, subcontractors, suppliers and vendors, has been a challenge."

As for weather-related issues, "We have planned for winter shutdowns each season from November through April," said McAndrew. "This past year's mild winter, however, allowed us to continue work on portions of the project virtually all year."

The Territorial Road Bridge over I-94 is actually being removed and replaced. Each of the new bridges consists of a concrete deck supported by prestressed concrete I-beams on pile bents and MSE wall abutments.

"It's a privilege to be involved with a project of this magnitude and regional significance," McAndrew added. 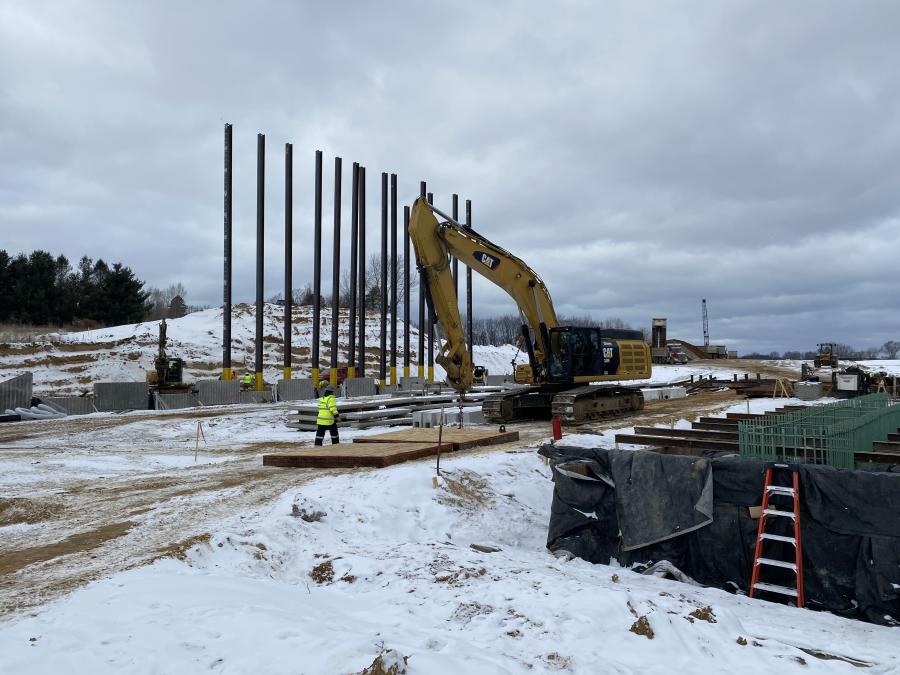 "Being that it's a design-build project, we have to develop plans and get them approved to order materials and work on the project. If we start without approval, we are working at risk and may not get paid for something.

"Also, any utility relocations have to be coordinated by us and are not taken care of already like on a normal MDOT project. With COVID-19 we are experiencing delays and shortages on materials we need, which makes things even more complicated for scheduling a large project like this."

Currently, earthmoving is taking place, and crews have begun pipe work. Last year, temporary widening and crossover work began to put all traffic onto the eastbound lane this construction season, to rebuild the westbound lane. The Crystal Avenue roundabout also was completed and clearing was performed this past winter.

Regarding unexpected issues, said Peplinski, "The biggest issue to date was the demolition of three existing structures on I-94. They were originally going to be torn down part width. After analysis this winter, it was changed to detouring all traffic on I-94 for three consecutive weekends to remove each bridge in a 12-hour period or less for the safety of everyone.

Peplinski said the main concerns are getting the work done on time, scheduling crews for all the tasks, coordination of all the subs, finding qualified help to build the project and safety.

Rebuilding two interchanges and reconstructing approximately 3 mi. of I-94 is less involved than it might sound, he said.

"It's not very difficult. Larger projects are sometimes easier to manage. It's usually just working around traffic on high volume freeways, such as I-94 where we worry about safety for both our people and the motoring public."

Placing new pavement beginning on U.S. 31 calls for a lot of earthwork to move, then placement of drainage culverts and sewer, then sand subbase and underdrains followed by aggregate base and paving.

Creating new bridges for roads over the new section of freeway also is part of the job.

"The two U.S. 31 bridges — Britain Avenue and Benton Center Road — are easier as they are not over any traffic. The two bridges for the new I-94BL and Territorial are more difficult, as half of them will be built over live traffic. The three county roads also have a 120-calendar day time limit, which is extremely tight."

In addition, crews must realign the interchange where U.S. 31 will meet I-94 and E. Main Street with new ramps.

"There is a new structure being built here by Milbocker & Sons Inc., and a lot of embankment is being built in this area to construct the new interchange for U.S. 31 tying into Main Street and going over I-94," said Peplinski.

Workers are reconstructing 3 mi. of the westbound lanes of I-94 as well. 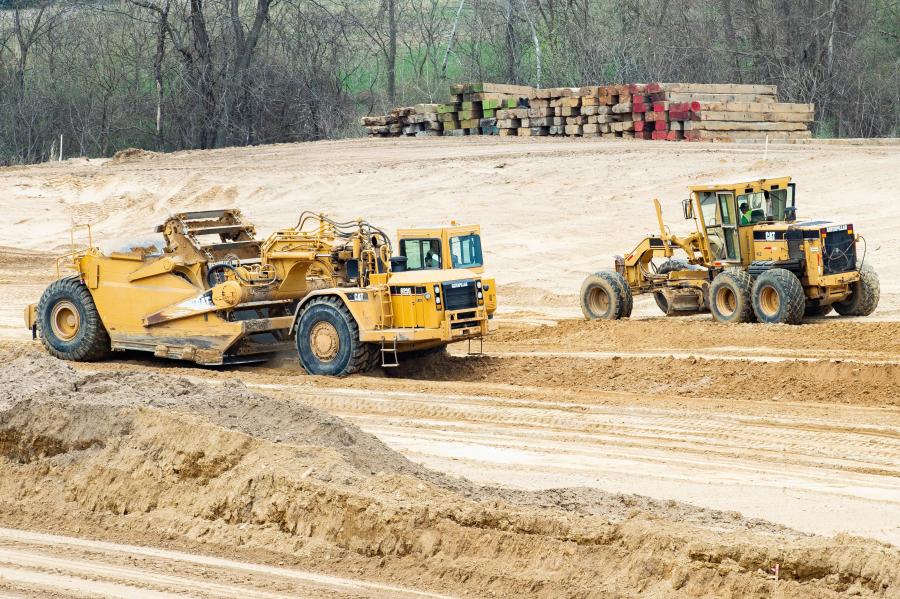 "We are constructing both bounds of I-94, westbound 2021 and eastbound 2022. All traffic is placed on the other bound separated by a temporary concrete barrier wall. We are close to traffic in the median, so this is a little difficult. There also are ramps at I-196 that have time limits to shut down and reconstruct and then they get opened back up to the other side and cut off access to the entire job on that side.

Standard equipment is being used on the job, along with routine materials.

"For roadway, we're hauling in sand. Aggregates are mostly recycled on the job site from the old concrete pavement, and the balance is limestone material from the docks. There are a lot of pipe and drainage structures for the underground work and concrete for the median barrier and valley gutters. HMA is used for all the asphalt paving by Rieth-Riley."

The most time-consuming part of the work involves moving all the earthwork to construct the large elevations needed for overpasses, etc. There also is a large volume of HMA paving, as well as the four new bridges that will each take about three to four months to construct.

Peplinski noted that the job at hand requires an experienced team, such as his.

"We specialize in moving large volumes of earthwork, and have a lot of equipment for this type of work. However, it is getting harder for all construction companies to find qualified operators in the construction industry and enough of them for all the work going on. This has been our biggest hurdle."

Said Peplinski, "I like working on these large projects. Once they get started, there is usually a lot going on and a lot of people involved in them. Last year we started this one and constructed the large I-496 project in Lansing and I-196 eastbound near Hudsonville." CEG